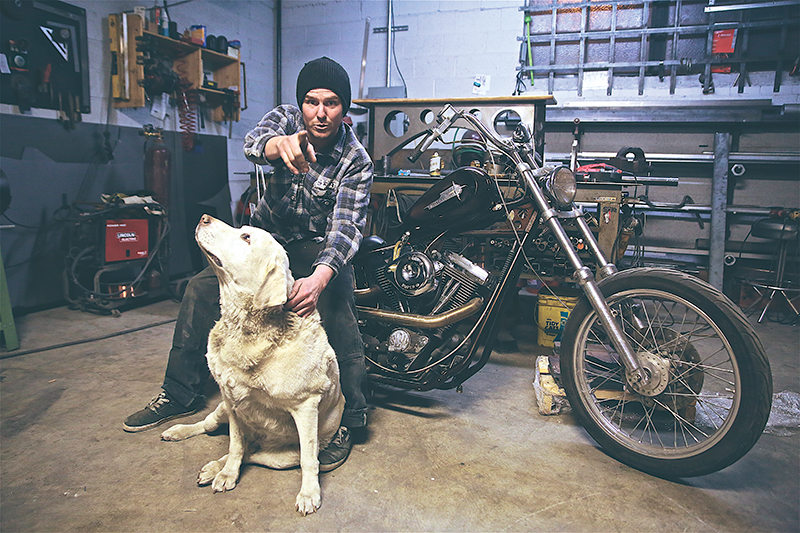 As a metal fabricator with a talent for sculpture, Simon Larson introduced SFK (Stupid Fucking Kids) to the custom motorcycle world eight years ago. The shop, currently operated by Larson and right-hand man Jake Brimley, combines classic American craftsmanship with modern technology. Larson possesses a near obsession with metal, a passion for creating and a relentless spirit that keeps him growing and evolving. He talks about it with a humbled respect and understanding that only someone who truly knows their medium can have. His eyes get big and his hands play out his words as he explains all the different forms and shapes metal can take.

Larson’s garage is currently packed with custom-bike projects of his own design, as well as his customers’ creations manifested through his own hands. Larson combines his talent for metal sculpture and his love for two-wheeled machines with his homegrown work ethic. “My dad was a redneck, a country boy,” he says. “I enjoy working hard. I’ve always wanted to be a blue-collar worker. I’ve never wanted to be a businessman.” Whether he wanted it or not though, Larson has become a successful businessman on his own terms. Larson’s roots run deep in Utah’s snowboarding scene, but after suffering a knee injury and enduring the subsequent surgeries involved, Larson’s path changed. He got his degree in Fine Arts at the University of Utah with an emphasis in sculpture. All Larson had to do after that was to start creating things. “I decided to grab an angle grinder and a welder, and it turned into this,” he says. “It has completely changed my whole life.” Larson pays a lot of respect to the local moto scene that has helped pave a path for him and the next generation. “Rick [White] out at Dirty Rat is at the top of the fucking pyramid,” he says. “I am mechanically inclined. I built my own engine, but it was over Rick’s shoulders.”

Larson is a self-proclaimed tinkerer. “I always took things apart and put them back together,” he says of his early childhood fascination. “I wanted to learn. I’m a hands-on person.” Larson’s been taking things apart and rebuilding them since he was a kid: “When I was 5 or 6 years old, my dad gave me an old lawnmower as my first project. I was outside with an axle and wheels when my dad walked out. I had seen him melt metal with a soldering iron, so I thought that’s what that does. My dad didn’t even tell me that’s wrong; he just said [to] keep tryin’.”

Business doubled once he moved his shop out of his backyard in the 9th and 9th East neighborhood and into the current location on 121 W. Commonwealth Ave. in South Salt Lake. Larson owes a lot of this success to being in a more convenient location. “The intimidation factor is completely gone,” he says. “I had my old shop in my garage in the back of my house. You’d have to drive 100-plus yards into my backyard. I had my friends chilling there. We had badminton set up. It was intimidating. I didn’t realize I was missing out on this much business.

He takes a lot of his inspiration from Industrial-era America and early manufacturing methods from the ’50s in his motorcycle designs, as well furniture designs. “The ideal situation would be to build what I want and how I want it,” Larson says. Building motorcycles will always be a major part of SFK, but a large portion of Larson’s business is spent on high-profile projects ranging anywhere from custom furniture for J. Thompson to being the Field Engineer for Salt City Supply Industrial Refrigeration.

It’s apparent just how connected Larson is to the metal he manipulates. “I’m a metaller,” he says. “I’m passionate about metal.” With that level of skill and understanding naturally comes frustrations. “My least favorite thing is drilling holes and getting metal shavings in my eyes.”

The next level for Larson is to continuously improve his efficiency through different techniques in metal-working. The advancements in laser-cutting and water-jetting technology allow him to take on bigger projects and double his production. Larson says that he will always build bikes, but as with most creative minds, riding doesn’t take much skill—the skill lies in his ability to create and in his passion for design.

The patience he possesses and his attention to detail are that of another time as well. “Just because I spent 40 hours building this thing doesn’t mean it needs to go on [a bike],” he says. “I’ll just put it on the shelf with everything else.” SFK is reviving the old-school American craftsmanship of a previous generation, and it takes a passionately creative mind like Larson’s to truly live the saying, “It takes 10,000 hours to make you an expert.”