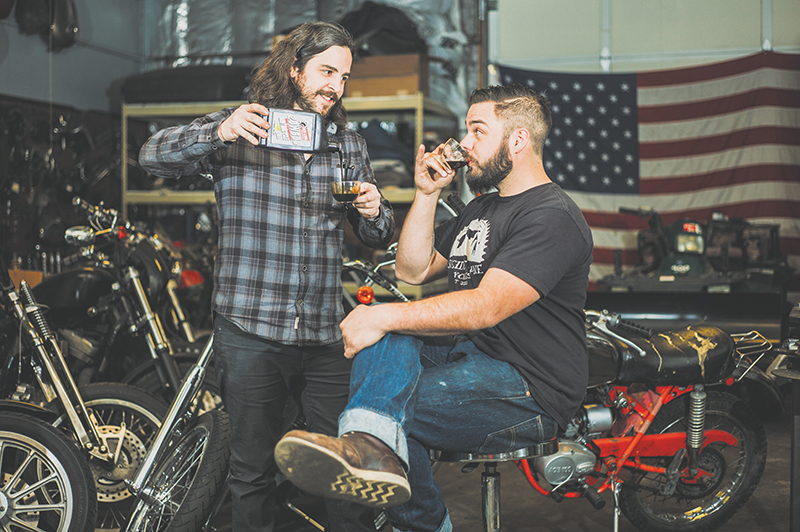 Initially founded in Los Angeles in 2012, the name Suicide Lane Cycles is a not-so-subtle reference to co-founder Nik Garff’s home city. After a brief stint on the sunny West Coast, he and Davy Bartlett returned to Salt Lake City, transforming a 10-years-vacant, former automotive shop just off State Street into a stunning retail space and custom motorcycle workshop. “When we got here, it was full of old shit—old car parts and everything that this building had ever been piled up for a decade,” says Bartlett. “So we spent the better part of a year cleaning it out and building our shop. Everything in here was here already—all the wood on the walls was old shelving that was here, as well as the valve shims on our countertop. We sweated a lot, but we didn’t put a lot of money into what is here.”

Visitors to their space will find a cleanly laid-out display of products from various motorcycle brands, much of which is arranged on custom-built mounts made of old tools and hardware found packed away in the building when they inherited it. A customized Harley-Davidson Sportster rests prominently in the front window display. Hats, patches, helmets and shop manuals are stacked in shelves on their walls along with an ancient punch clock they found—just for the hell of it. It gives one the feeling that they have been there longer than a year, though they recently celebrated their one-year anniversary at their current location, where they displayed photographs by Kristin Roper in a collection entitled Mothers Who Ride, which featured two-wheeling women along with their kin. Their shop was packed with people checking out their bikes, photos and metal mask art pieces that Bartlett made.

Tucked away in the back are a dozen motorcycles lined up and—similar to form—there are neatly organized tools mounted at workbenches, which aligns with Suicide Lane’s ethos: “We don’t ever compromise the integrity or performance of a bike,” says Bartlett. “Especially as a Dad and a business owner, if I sell someone a motorcycle, it has to [be able to] stop. … We used to not ride our bikes as safely as we do now, but age, experience and having kids changes how you do everything. We aren’t afraid to go fast, but I’d rather ride my bike forever than a little bit faster.”

Seeing the work that has gone into their bikes and retail space almost makes one winded, along with merely thinking about the attention to detail and all of the blood, sweat and oil they have spilled in pursuit of excellence. “I just want to improve upon what has already happened,” says Bartlett. “I don’t want to do the same thing over and over again.” They work to order, but also love when they can get personally creative. Says Garff, “You will always get the best result by letting the craftsman do what he does best.”

Suicide Lane offers both customization as well as mechanical servicing, which means that if it has two wheels and makes loud noises, they can work on it. Although both of them are equally capable, they both tend to focus on different tasks when creating a custom bike. “Nik is definitely the fabricator; I’m definitely the wrench,” says Bartlett. Davy agrees: “We both collaborate on design,” he says. “He usually cleans the bathrooms more than me, and I put up with his dad jokes.” They acknowledge that if a customer asks for something they can’t do or someone else does a lot better, they aren’t afraid to refer them to another shop. “I think every shop has developed its own aesthetic, and I think that is really important,” says Bartlett. “I love everyone [in the motorcycle community] that I know, and all the shops that are in Salt Lake have brought their own personality to the table.”

They both feel that people shouldn’t be afraid to get into motorcycling, though they admit that it might seem daunting. “I have met so many cool people [through motorcycles],” says Garff. “People LOVE talking about their bikes. Don’t be intimidated if they’ve got a big beard and a bunch of tattoos—go up and compliment them on their bike and ask them about it.  You’ll make friends, too.”