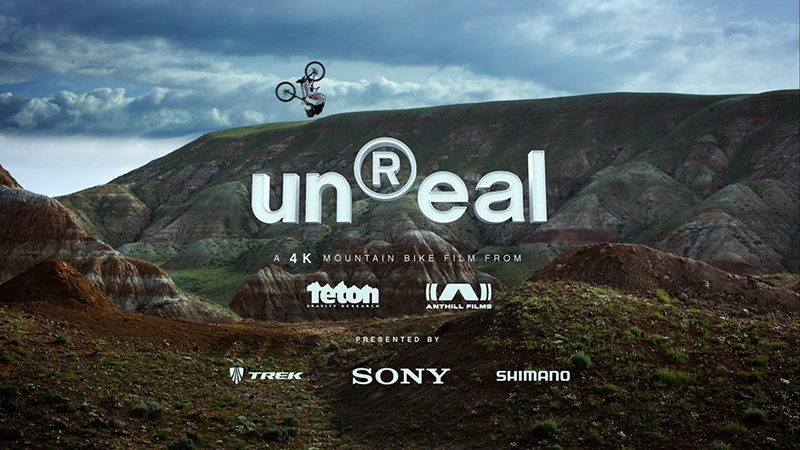 Under a half moon in a desert sky, the crowd gathered. American rock music from The Weekenders drifted on the wind across the Red Butte Garden Amphitheater as the sun dipped below the horizon. The Salt Lake City premiere of Teton Gravity Research (TGR) and Anthill Films’ unReal was about to begin.

Master of Ceremonies Ryan Moore took the stage and welcomed the eager group of mountain bikers and adrenaline junkies for what promised to be the ultimate bike movie of the year. Much like their wintertime ski flicks, TGR spares no expense when it comes to putting on a show. The venue was teeming with excitement as the opening scene showed a sole mountain biker ripping through an alpine forest in the dead of night. Smashing berms and hitting gap jumps is hard enough in the day, but Canadian rider Brett Rheeder proved his nocturnal prowess as he nailed the shot every time.

The movie then transitioned to the Pemberton Ice Cap as the crew of riders straight-lined sketchy, snow-covered mountainsides and took flight over glacial crevasses. The unlikely combination of snowmobiles and mountain bikes made for some entertaining line choices and outrageous stunts. The athletes even went so far as to drill screws through their tire treads to obtain better traction on the precipitous slopes.

As the film carried on, the stellar skills of veteran riders like Brandon Semenuk, Cam McCaul and Thomas Vanderham were put to the test on the planet’s most unforgiving terrain. A mind-melting acid drop by Semenuk took the riding to the next level, and the crowd went nuts when this never-before-seen move was performed with such fluidity.

Each athlete continued to showcase their ability to work with the terrain and create unique lines that were as imaginative as they were terrifying. Massive front flips across 60-foot gaps, outrunning grizzly bears in the woods and keeping pace with a stampeding herd of wild horses were just a few glimpses into the unReal world that these riders call home.

The closing segments of the film find the crew in Whistler, British Columbia, where a freak “brown powder” storm dumps massive amounts of dirt from the sky. Like children, they carefully sculpt features and snatch face shots in their newly painted landscape. The dreams of so many riders come true and dirt falls like snow to provide limitless opportunities for creative line selection. A final hoorah for the Whistler locals comes in the form of a group shred session with all the pros, which culminates in a barrage of dusty drifts and high fives.

Overall, the team of photographers and videographers did a great job of putting together a visually stimulating film that takes the viewer on a journey to places where bikes are seldom seen. Gratuitous super-slow-mo and stunning time lapses are commonplace in action sports films today, but TGR and Anthill do a nice job of keeping enough real-time footage in the film to give the audience a sense of the speed and control that these guys must maintain. It is a must-see for bike enthusiasts who want to live vicariously through their favorite riders.

Check out tetongravity.com for behind the scenes footage and information on future showings.