00:00 / 16:39
Spotify Stitcher
RSS Feed
Share
Link
Embed
Before we begin, I’d like to start with an invo- cation, and invite you to ponder what the Devil means to you. Do cliché images of red creatures with horns, wings and flames come to mind? Per- haps images of Norwegian black metal come through, as churches burn in flames and pagans flirt with death? Or maybe Lucifer is just some simple dude who goes bowling on weeknights.

Design of the Devil’s Hand? Diabolical Affinities Through Printmaking 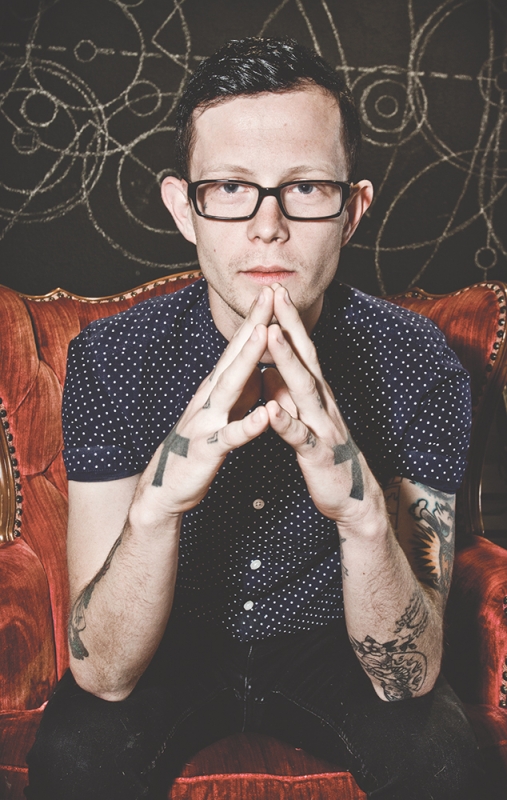 Before we begin, I’d like to start with an invocation, and invite you to ponder what the Devil means to you. Do cliché images of red creatures with horns, wings and flames come to mind? Perhaps images of Norwegian black metal come through, as churches burn in flames and pagans flirt with death? Or maybe Lucifer is just some simple dude who goes bowling on weeknights.

The archetype of “The Devil” holds such multi-layered meanings that vary from person to person and across cultures. With such broad connotations that vary between darkness, evil, debauchery or immorality (the list goes on), the infamous idol holds a distinct position that is used to describe ways that we see ourselves, and how that translates to the ways that we see people outside of ourselves. Artists Robin Banks and Justin Nelson-Carruth are opening up the doors of The Mandate Press on Friday, June 21 for an exhibition that expands these diabolical conversations in their show, Design of the Devil’s Hand?
The two local artists started the process by talking to friends and bouncing their ideas off of each other while working at The Rose Establishment. Design of the Devil’s Hand? has become an opportunity for them to meditate deeply on their own ideas of the Devil, and they’ve stumbled across some intimate truths in the process. The original inspiration, initially proposed by Banks, came with the notion of what it means to be an individual. “People talk about how we’re all made individually, and we’re all beautiful, little snowflakes, and how beautiful it is … ‘Why is that a good thing?’ is something that I don’t think anyone really questions—they’re just like ‘Oh, individuality! That’s great!’” Banks says. Printmaking turned out to be the most appropriate medium to embody this concept, as it repeats patterns and prints multiple copies of the exact same image, and removes the idea of individuality or uniqueness typically sought in a single piece of work.
Design of the Devil’s Hand? is not meant to be totally reactionary, per se, but is intended to open up a new conversation about our commonalities. Banks says, “If you really uncovered people’s dark parts, we probably all have a lot in common.” By being in an area that is surrounded by religious imagery, Salt Lake is a key place to open the door to this type of dialogue. “Salt Lake is split—it’s pretty extreme on both sides. But I don’t think that we’re unable to make conversation because of it. That’s something really nice about Salt Lake. All of the artists have different views, and I was surprised how excited some of the artists I approached were about it,” Banks says. Nelson-Carruth counters with the thought that these ideas are more universal than what religion may posit, even in a state such as Utah. He says, “‘God’ and ‘The Devil’ are just these archetypes that have never really been a part of my life, and they represent something that’s basic to me, which is good and evil. I don’t call them ‘Jesus’ or ‘The Devil,’ but with the show, the title poses a question that asks how you identify with this. It could be from a religious background, or an atheist background. It can be universal.”
The two invited around 25 local artists, including Sri Whipple, Trent Call, Korey Martin, Mary Toscano, Nic Annette Miller, Skyler Chubak, Tyler Densley, artists associated with The Mandate Press, Cathedral Tattoo and more, to contribute a piece that reflects their thoughts of the Devil, with the dimensions of a 6 x 8 in. or 11 x 14 in. print, requiring that they use an off-white background and limit their palette to four colors. The artists are welcome to choose whatever type of printing they want, which will include varieties between screen printing, letterpress, copper etchings and block prints. While they originally planned to limit the requirements more to create a sense of unity, the two nixed that idea in favor of open artistic interpretation. “We tried to keep the artist rundown of the show descriptive, but not enough where it leads artists too much, and it’s been really amazing to see where people are going with it,” Banks says. Nelson-Carruth agrees, and says, “With the artists that we’ve talked to, it seems like there’s a really nice subtlety that’s coming out in the work. It’s not just graphic representations of devils doing devilish things—there’s a lot of thought going into it, and it’s kind of bringing out this dark side in people that I’ve known for a while, and I’ve never really heard them talk about it.”
With The Mandate Press set up for letter pressing, the space is perfect for the artists and their ideas, and its open layout is conducive to rearranging to fit their needs. Rather than hosting a typical art show that can feel awkward as people stand around and stare at walls, the two have received support from a lot of local companies, including Squatters, who will provide their Outer Darkness and Hell’s Keep beers, food carts (including City Dogs) to savor your gluttony, bottled iced coffee from The Rose Establishment, along with some carnival-esque cutouts with images of the Devil. You can wash all of that down while DJ Andy Cvar spins some devilish soul, blues and jazz throughout the evening. The Devil’s hand will play an engrossing part in this hell-raising event, and will take place on June 21 from 6 p.m. till whenever the Devil goes to sleep.
Photos: