Chris Holifield has worked hard to dispel ideas that Salt Lake City is a boring place to be by creating the I Am Salt Lake Podcast: a truly unique show that features local businesses, musicians and everyday people who make Salt Lake such an amazing city. As a non-native, Holifield sees the city through different eyes and believes that the people here are inspiring. He considers himself the “Larry King of Salt Lake City,” and he wants to hear your story.

I Am Salt Lake Podcast: The Larry King Live of SLC 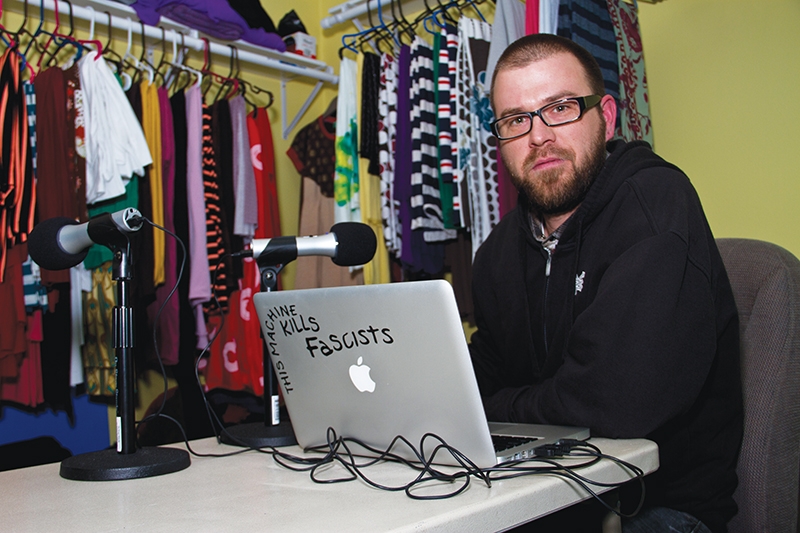 Chris Holifield has worked hard to dispel ideas that Salt Lake City is a boring place to be by creating the I Am Salt Lake Podcast: a truly unique show that features local businesses, musicians and everyday people who make Salt Lake such an amazing city. As a non-native, Holifield sees the city through different eyes and believes that the people here are inspiring. He considers himself the “Larry King of Salt Lake City,” and he wants to hear your story.

Holifield first fell in love with the city during his first time at Craft Lake City, the annual alternative arts and crafts fair held in downtown Salt Lake every summer. His wife, Suzanne Holifield, participated as a vendor, selling clothing she sews that is now featured in her store, Sorry Clementine. He was excited to see people participating in local fairs and supporting one another. “A person can create something and [this] city is small enough that you can rise to the top a little bit and people will notice you and give you a chance,” he says, reflecting on his and his wife’s successes. “The support in Salt Lake City is unbelievable. I really think people can live their dreams here.”

After hearing complaints people had about Salt Lake, mainly that there is nothing to do, he was motivated to change their perceptions. An avid podcast listener, Holifield decided he wanted to try the medium. He researched and even listened to “how to podcast” podcasts. When tossing around the idea of a podcast about Salt Lake, his wife was initially the only supporter. Many people shot him down by saying that Salt Lake was too small a market: No one would go out of their way to listen to a podcast about Salt Lake businesses and people. Holifield investigated other podcasts similar to his idea—but none could be found. The I Am Salt Lake Podcast concept was so distinctive that before conducting his first interview with Urban Vintage, a local antique store, he was nervous. “It wasn’t like I had a mentor,” he says. “I was like, ‘I don’t know if this is the stupidest idea in the world, but I’m gonna go for it.’” Since that interview, Holifield has kept busy planning future shows. Businesses found on Facebook, friend recommendations, emails and voicemails left through his website all give him new leads––and everyone has a unique story he wants to feature.  Holifield prepares for his interviews by listening to podcasts he can find about the subject related to his interviewee. For example, before interviewing Jason Stock, head brewer at Squatters, Holifield listened to podcasts about brewing.

Since making its debut in August 2012, I Am Salt Lake Podcast averages about 1,500 downloads an episode––impressive numbers considering this is his first venture into podcasting and it has only been around for less than a year. Holifield is surprised with his success. He says, “Someone really has to have an interest for Salt Lake City if they listen to my podcast versus someone who might do a podcast that might appeal to a wider range, such as movies, comedy, comic books, etc. I would say that this number is awesome, especially considering its demographic.” The episodes are short, between 30 minutes to an hour, making them a quick listen. In the beginning, he decided to post one episode a week. Since both the show’s popularity and his addiction to podcasting have grown, he now posts twice a week. He travels to the places he wants to feature, conducting interviews where the listeners can experience the ambiance with him. Interviews in restaurants contain background noise from the kitchen and customers enjoying themselves, making the interview sound more like a casual conversation. After the preparation and interview is done, he edits the podcast himself and will add plugs for upcoming gigs like gallery openings, city events and bands playing that week.

Listening to his podcast, and hearing him share his experiences of learning about the city, it’s apparent his enthusiasm is contagious. He even spurred me to try Fat’s Grill, a restaurant that had been around for years, but remained off my radar. I am definitely not the only one who has been motivated to experience something new because of his show. Now, almost six months after his first episode, the response has been overwhelming. Holifield has had people tell him they’ve related to, learned from and been inspired by the interviews he’s done. Even though he faced doubt in the beginning, it’s grown into something positive. “A handful of people have told me, ‘You’re on to something here,’” he says. He finds people are asking him for cool stuff to do in Salt Lake, even though he asserts he’s “no expert.”

Holifield has dreams of expanding his podcast into several different venues. Someday, he would like to turn I Am Salt Lake into a live show and include a regular co-host, or even evolve into a video podcast. Since Holifield has walked the city himself, he has also considered creating walkable audio tours that could be downloadable to a smartphone or MP3 player. He wants to be the guide that takes people through areas of Salt Lake that maybe they aren’t familiar with.

To learn more about the city we live in, you can find the I Am Salt Lake Podcast on iTunes or iamsaltlake.com.

Recommended If You Like:
The Awkward Hour
Front Row Podcast
My House On The Moon
Soundwaves From The Underground