00:00 / 20:24
Spotify Stitcher
RSS Feed
Share
Link
Embed
When I first walked into Painted Temple Tattoo, I got the feeling that I had walked into the wrong shop. However, underneath this art gallery/tattoo shop is a world of pure metal manufacturing: acetylene torches, surface grinders and spare parts. It’s one thing to illustrate bodies—it’s another to craft the tools yourself. Dan Walker and Oak Adams, the owners and artists at Painted Temple, have been crafting their own tattoo machines (don’t call it a gun) since 2007, and business is good. 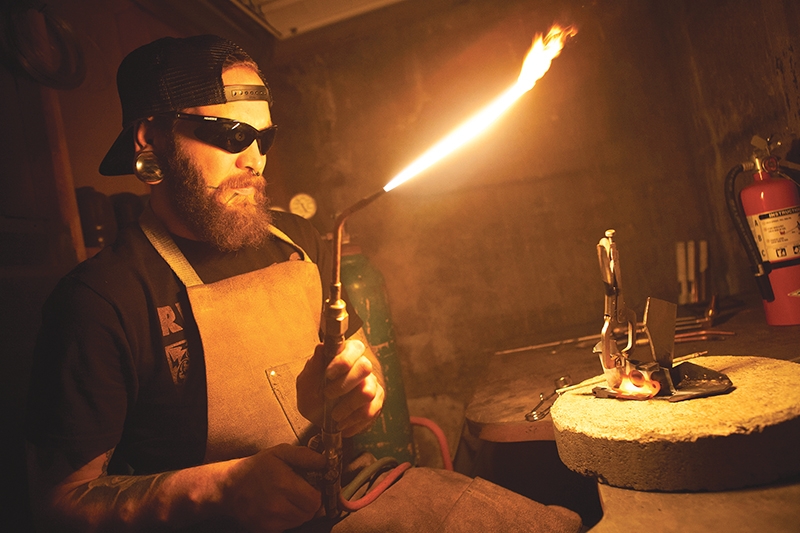 When I first walked into Painted Temple Tattoo, I got the feeling that I had walked into the wrong shop—white walls and wood floors with two high-tables greeted me. Classical music played over the PA and two heavily body-modified men wiped away shoe prints with Swiffer mops. No stacks of Inked, no Gypsyhawk. It looked more like an art gallery than a shop. However, underneath this art gallery/tattoo shop is a world of pure metal manufacturing: acetylene torches, surface grinders and spare parts. It’s one thing to illustrate bodies—it’s another to craft the tools yourself. Dan Walker and Oak Adams, the owners and artists at Painted Temple, have been crafting their own tattoo machines (don’t call it a gun) since 2007, and business is good. SLUG sat down with Walker and Adams to talk to them about tattoos, tattoo machines and where they see the tattoo industry headed.

Walker grew up in Springville, Utah where he discovered his passion for art and tattooing. “I started out as a teen giving bad tattoos to bad friends,” says Walker. “I kept on doing that until I knew what I was doing.” After high school, Walker bounced around Central America for two years, which is when he came into his element as an artist. “That’s where I found my style. I was basically a beach bum, so I had a lot of time to find myself … I was making a living doing small art pieces,” he says. Walker eventually moved back to Utah, and after working for a few shops, opened Painted Temple Tattoo with Adams. “I discovered I didn’t like ‘clock-in-clock-out’ jobs. I wanted to work on my own schedule. Not a lot of people get to realize that,” says Walker.

Adams was introduced to tattoos by a family friend early on in life. “I had the love and passion . I started out young and never stopped,” he says. Starting out with a Walkman-powered tattoo machine at age 13, he wasn’t able to tattoo anyone until he was about 15 or 16, and slowly honed his skills and became more confident in his practice. After a brief hiatus, Adams moved from home-tattooing to apprenticing under Indiana’s Dave Pritchard—where he learned the ins and outs of the industry—and after hopping around the U.S. from shop to shop, he branched out on his own.

Adams’ and Walker’s passion for creating tattoo machines started out as a combination of necessity and curiosity, as it does with most accomplished craftsmen. “I’ve always been mechanically inclined,” says Adams. “[I] started wanting machines to run differently, started altering machines, and it led me to making my own—modifying things to make them run how I wanted them to. [From there, I] figured it out through friends and [having] discussions.” Adams creates machines for all styles, but specializes in tattoo machines meant for black and gray tattoo art, while Walker builds machines of all styles. “Our journey [in making machines] was separate,” says Walker. “We both got really into tuning machines, and for a while there, we would buy new machines every month, nice machines, and [Adams] started making machines without the right tools—Dewalt Drills, hack saws—and it just happened.”

This DIY-styled passion for making and modifying their own tattoo machines evolved into making and modifying machines professionally for other artists. On average, Adams and Walker produce 10 to 15 custom machines a month, with most of their business coming from Europe. Adams would love to eventually see machining become a part of their full-time operation. “I’d like to machine more—I’m always behind on orders these days, but I’d love to tattoo three days a week and machine two days a week,” says Adams. Walker and Adams guarantee their machines for life (with few exceptions) and maintain the machines they provide. “[A tattoo machine] has to look good and feel good. It has to be consistent,” says Walker. “You just know [a good machine] when you start it, like with a car.”

Adams and Walker see a bright future for the tattoo industry, not only for patrons, but for artists as well. “In the last 10 years, it’s turning more into a fine art than an act of rebellion. It’s getting accepted. Nowadays, inspiration comes instantaneously. In the old days, a magazine would come out, half of it would be rubbish, the other half good. To seek out a great artist took a serious amount of travel,” says Adams. “Today, I can get on the phone and, in five minutes, I can see work [a friend has] done today—I can see work any time of the day, see something awe-inspiring.” Walker and Adams have noticed the industry open up to those who want to learn, rather than closely guarding their trade as a secret. “People are sharing and teaching each other how to get better,” says Walker. “Everyone wants everyone to learn and push the industry forward.” These guys practice what they preach, touring many of the tattoo conventions in the West, even producing their own video series on tattooing in 2008 for YouTube’s Expert Village.

Walker and Adams’ unique perspective as artists and craftmen is very apparent in their work. “[Making machines] has made me a better tattooer,” says Walker. “You’d be surprised at how few artists know anything on how to tune their machines.” Both artists specialize in portrait and realism tattoos, and their experience can be seen in the quality of the work they create at Painted Temple Tattoo.

If you’re looking to purchase a tattoo machine or want Walker, Adams, Chris Rose or Mitch Anderson to do some tattoo work, check ‘em out at their studio, 2435 S. Highland Dr. in Salt Lake (right next to Iris Piercing), or go to paintedtemple.com.