00:00 / 18:49
Spotify Stitcher
RSS Feed
Share
Link
Embed
Geekdom has undergone some massive transitions over the last decade, moving from the Cheeto-scented shadows of pop culture into the limelight. Like any good cultural renaissance, geekdom is busting down gender barriers as well. Enter our story’s heroines: Cherri Vasquez, Kristal Starr, Rebecca Frost and Danielle Über Alles. The panel of the Hello, Sweetie! Podcast is four ladies committed to bringing geekery from a female perspective to the world.

Queens of the Geek Age: The Hello, Sweetie! Podcast 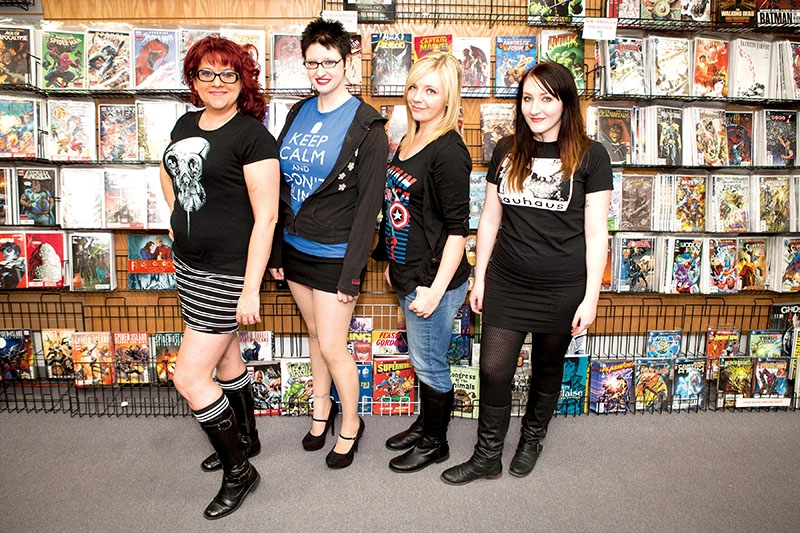 Geekdom has undergone some massive transitions over the last decade, moving from the Cheeto-scented shadows of pop culture into the limelight: Hollywood is lousy with superheroes, video games have gained recognition as an art form, and George R.R. Martin is making respectable sorcery for even the most closeted fantasy fan to admit to enjoying. Like any good cultural renaissance, geekdom is busting down gender barriers as well. Enter our story’s heroines: Cherri Vasquez, Kristal Starr, Rebecca Frost and Danielle Über Alles. The panel of the Hello, Sweetie! Podcast is four ladies committed to bringing geekery from a female perspective to the world.

Founder Vasquez had her interest in podcasting sparked when her then-husband was just beginning his Punk N’ Pie Fraudcast. “I watched him do it and sort of decided that I wanted to do a podcast that was geek-themed, and I noticed there weren’t any geek podcasts that brought it from an all-female perspective,” says Vasquez. She recruited two panel members—Starr and former member Jenifer Morris—from roller derby, Über Alles from Facebook and gave the show a name inspired by her fandom of Doctor Who. Scheduling conflicts left a panel spot open and after receiving positive reviews as a listener-cum-guest, Frost (who is also a SLUG writer) was asked to join the cast permanently. Just over two years later, Hello, Sweetie! has become the envy of the geek podcast world, getting attention from coast to coast for its relaxed and incredibly funny chatter.

They’ve been welcomed by the public for filling a unique niche, but getting over 800 downloads in your first month is bound to stir some jealousy. Starr, movie maven of the panel, says, “We’ve met other podcasters that have been upset—generally male podcasters—that are like, ‘Oh, that’s because you’re girls.’ Then you ask them what their podcast is about, and he’s like, ‘Well it’s me and my friend, and we usually agree about most subjects.’ We’ve got four girls with feisty opinions, and we’re kinda funny.”

Starr’s point highlights one of the huge draws of Hello, Sweetie!: There is an enormous amount of organic conversation between these ladies, who are all geeks in their own, special ways. They all bring their own interests and news to the table, with pretty much no single subject uniting them in love or hate. Some of them are stoked about The Hobbit, but Frost is not a big fan of Tolkien. Frost loves celebrity gossip; Vasquez is into cosplay and is building her own Mandalorian armor. This dynamic almost guarantees that any geek listening, regardless of their status, will find a comrade-in-arms whose opinions they agree with, but they’ll almost always hear a voice of dissent that keeps the conversation running. The ladies also have hilarious anecdotes, like how for Frost’s first podcast as a panelist, the subject of the day was pornography, which happened to be the first episode Über Alles’ co-workers listened to. And all the ladies erupt into laughter recounting the time their broadcast was crashed at Brewvies by some of the Geek Show Podcast crew, who obliged the “no-pants podcast” rule inspired by derby girl uniforms and made their entrance with trousers around their ankles. This is the kind of camaraderie inherent in the culture that truly unites and also draws listeners from all walks.

The geek girl is a mythical creature to some, like a unicorn in a swarm of zombies. Regardless of the geek medium of choice, you will find women are notoriously underrepresented (or misrepresented). So to the unicorns out there, the Hello, Sweetie! Podcast is a sparkling oasis. That, of course, does not mean that dudes aren’t welcome. “I think the nice thing about our show is we don’t try to necessarily target females as listeners … We’re just four girls and we like to get together and nerd out with our friends, and that’s a normal thing to do,” says Vasquez.

With a lot of talk on the web regarding the so-called “fake geek girl” phenomenon, solidarity is needed now more than ever. Vasquez acknowledges the hurdles women are still very much up against. “I think, really, what that type of mentality does is pit women against each other, and we’re already competitive enough as is, and it damages budding nerd girls. Just because you don’t have encyclopedic knowledge of the X-Men doesn’t mean you can’t have a cute Mystique cosplay because you think it’s cool and fun, and I think that’s the consensus we’ve come to when asked about it—there are varying degrees of geekery. I know a ton about Firefly, but I guarantee there are people out there [who] know more and could put my Firefly knowledge to shame. That doesn’t mean I’m not Browncoat for life.”

In the end, Hello, Sweetie! represents not only a female affirmation, but an affirmation for geeks everywhere and in all skins. “I think everybody’s a geek,” says Starr to a resounding chorus of agreement from her comrades. And big things are following this philosophy: They’ve monetized their efforts with great, local sponsors: Dr. Volt’s Comics and Hastur Games and Comics. They just joined the Bobo Broadcasting Network, vastly expanding their listener base. Next up in the hero quest of Hello, Sweetie! can only be world domination.