00:00 / 18:49
Spotify Stitcher
RSS Feed
Share
Link
Embed
Junction City’s travel team was up in Bremerton, Wash. to take part in the Wild West Showdown, an annual three-day derby brawl with leagues from all over the nation hosted by the Slaughter County Roller Vixens.

Annie, Get Your Skates: JCRD Saddle Up for the Wild West Showdown 03.01 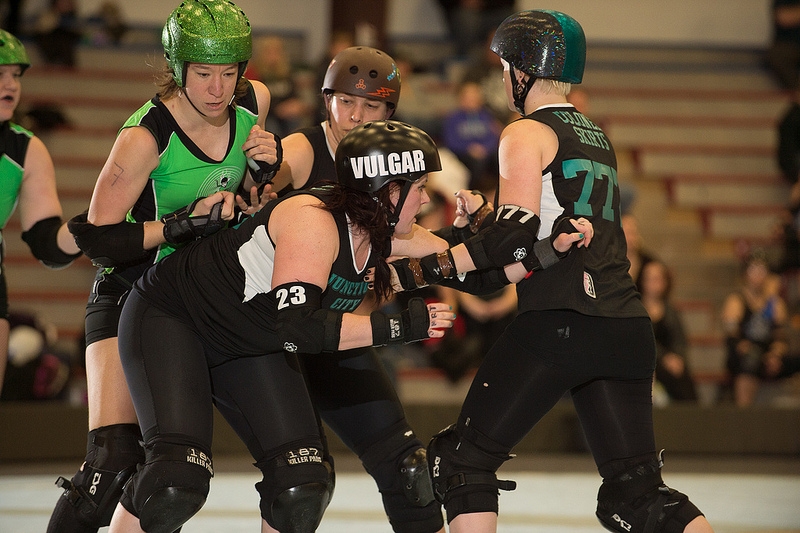 Brewskis is an established bar and grill nestled in Ogden’s historic, also slightly notorious, 25th Street. It’s an amazingly quaint little strip, and I advise anyone with a Saturday to spare to make the drive out there and do a little adventuring. Now, shameless Ogden promoting aside, the real reason I was all the way out there this last Saturday was to cover the season opening game for Junction City Roller Dolls. Now, some of you may be wondering why and how on earth would one hold a derby game inside a bar? Well, aside from some obvious size limitations it would seriously be the perfect place to host a game (because honestly, the only thing that goes better with beer is derby—and more beer), but alas, this was not the case. Junction City’s travel team was up in Bremerton, Wash. to take part in the Wild West Showdown, an annual three-day derby brawl with leagues from all over the nation hosted by the Slaughter County Roller Vixens. Fifteen WFTDA leagues along with nine junior teams competed in the event.

Now, bringing us back to the subject, as the team was up in Washington for the game, Brewskis provided the arena to watch the live feed of the game between Junction and the Emerald City Roller Girls. As we were in a bar, actually hearing the game was going to be next to impossible. So, I had to make due with intently watching the screens and make more educated guesses than not. As the bout began, with the few members of the Junction league, friends and other supporters counting down the start, it seemed like Emerald City took the dominant and offensive strategy and scored the first points of the game, quickly increasing their score as the bout continued, with Junction trailing rather far behind.

As the bout played on with 15 minutes left of the first half, Junction seemed to figure out their opponents and switched gears, pulling out some spectacular plays, and some great skating maneuvers that I could see even through the television. Between Bee-A-Trix, Pickle and Malibu Harpy, they managed to not only increase their score and change the lead, but dominated the bout, almost always having lead jammer position. By halftime, Junction was leading 118 to 57.

The second half continued on as if halftime was just a line-up countdown. Apart from a few penalties from both teams, Junction blazed on even with Emerald City trying their hardest to increase their score, and at times, almost making that a reality. Although Emerald was definitely a worthy opponent, Junction pulled out a great game and skated away at a score of 201-159.

For those who don’t follow derby closely, Junction not only won this bout, but all three bouts they were a part of at the Wild West Showdown: the first day against Sick Town with a score of 247-91, the second day against Emerald City, and the third and final game against Ark Valley, 241-108. These lovely ladies deserved their three-peat win, and I look forward to their home games here in Ogden. To find out Junction City’s game schedule, visit them at junctioncityrollerdolls.com and come see these skaters in action.

Check out more photos of the bout by Chris Bojanower here.