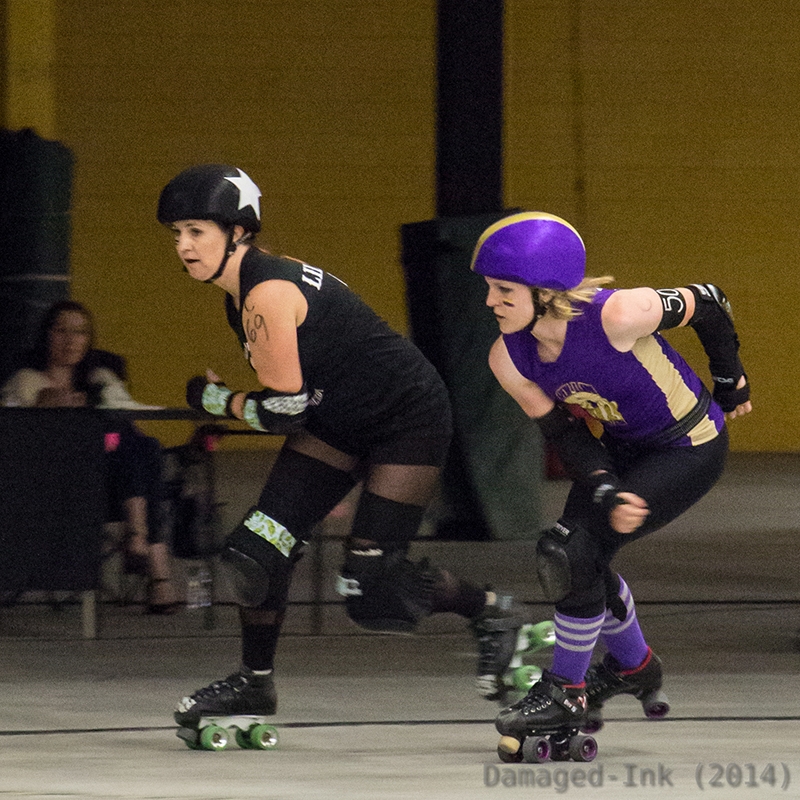 Lil’ Misfit of the Daughters of Anarchy and Hip Knock-It Therapy of the Rollin’ Rebellion vied for the win at Saturday’s bout. Photo: Drew Card (Ef-Stop).

On Saturday, June 21, skaters clad in black or purple rolled up on the Hive’s track for what would surely be an exciting bout between two teams of Utah County’s Happy Valley Derby Darlins (HVDD). The Daughters of Anarchy are known as “the lawless ladies of HVDD” while the Rollin’ Rebellion skaters are famous for “wreaking havoc on the track.” Sound like a good slice of roller derby? You can bet your skates on it.

Neither team wasted any time — from the first whistle of the first jam, the bout was action-packed. Flower Bomb, of the Daughters of Anarchy, broke through the arms of Rollin’ Rebellion skaters but was later sent to the box, giving Wild Child the opportunity for a power jam. Without the jammer of their opponents, the Rollin’ Rebellion took advantage of the situation and stacked up points almost as quickly as the number of fans trying to get a good seat.

Both teams did a good job of utilizing bridges; when one team knocked out an opponent, the skaters spaced themselves out down the track, forcing the knocked-out skater to come back in much further behind the spot where they had been knocked out. This is a great defensive move and also keeps all the skaters constantly on their feet. That’s because bridging forces the knocked-out teams to backtrack but if it’s done too aggressively, bridging can lead to a “no pack” situation, which hurts both teams.

In the first few minutes, Rollin’ Rebellion pulled in the lead with 17 points to 0 from the Daughters of Anarchy. At one point, RR’s jammer, Thrash’er had broken through the pack, attaining the status of lead jammer. But shortly after, DoA’s Wham Bam broke through the pack as well. Thrash’er decided (and wisely so) to call off the jam. Although it can be tempting to outrace the other jammer at that point, most experienced skaters will tell you that it’s better to not let the other team score anything than to prolong the jam to get a couple of extra points.

If I were able to vote for MVP of the evening, I would nominate Bizee Hummingbird. She was relentless, both as a determined blocker and a dependable jammer. She didn’t give up unless she legally had to and many of the DoA takedowns were thanks to her perseverance. At one point she was jamming and she slammed the other skater into the middle of the track, leaving no opposition to her status as lead jammer.

The most riveting incident in this bout was a pretty threatening injury. It all happened so quickly that more than half the crowd wasn’t sure what had exactly happened. It appeared that a tumble had resulted in some serious abrasions. The announcers informed the crowd that, as far as they know, this was the first time that blood has been on the Hive’s track. Everything stopped as EMTs huddled on the track to help the injured and others cleaned up the blood. But a little bodily fluid never discouraged a bunch of tough roller derby skaters — especially not ones from the Happy Valley Derby Darlins. So within a few moments, everything was back on track and again rolling towards victory.

At halftime, the score was 46 to 87 with Rollin’ Rebellion in the lead. As Period 2 started, the commentators reminded everyone that a 41-point spread doesn’t really give any room for comfort. A couple of power jams and the score could be leveled, no problem.

Pain in the Nikki, a regular skater on the Hive’s track, was on the Daughters of Anarchy bench during this bout due to a foot injury. It must have been hard for her to be on the bench coaching instead of skating, but there definitely wasn’t a lack of passion from this great skater. And her tips definitely helped her fellow teammates.

Although Lil’ Misfit from the Daughters of Anarchy had some sweet moves and a great power jam, scoring over 13 points in one jam, the DoA just couldn’t quite catch up to Rollin’ Rebellion. With just a few minutes left in the bout, Rollin’ Rebellion’s Wild Child racked up her 70th point for the evening leaving the score 101 to 157 for the RR. The final score was 108 to 154, with the Rollin’ Rebellion taking the victory. Both teams played great but it wouldn’t surprise me if the Daughters of Anarchy’s loss made them feel a little bit like the US soccer team after Sunday’s game against Portugal.