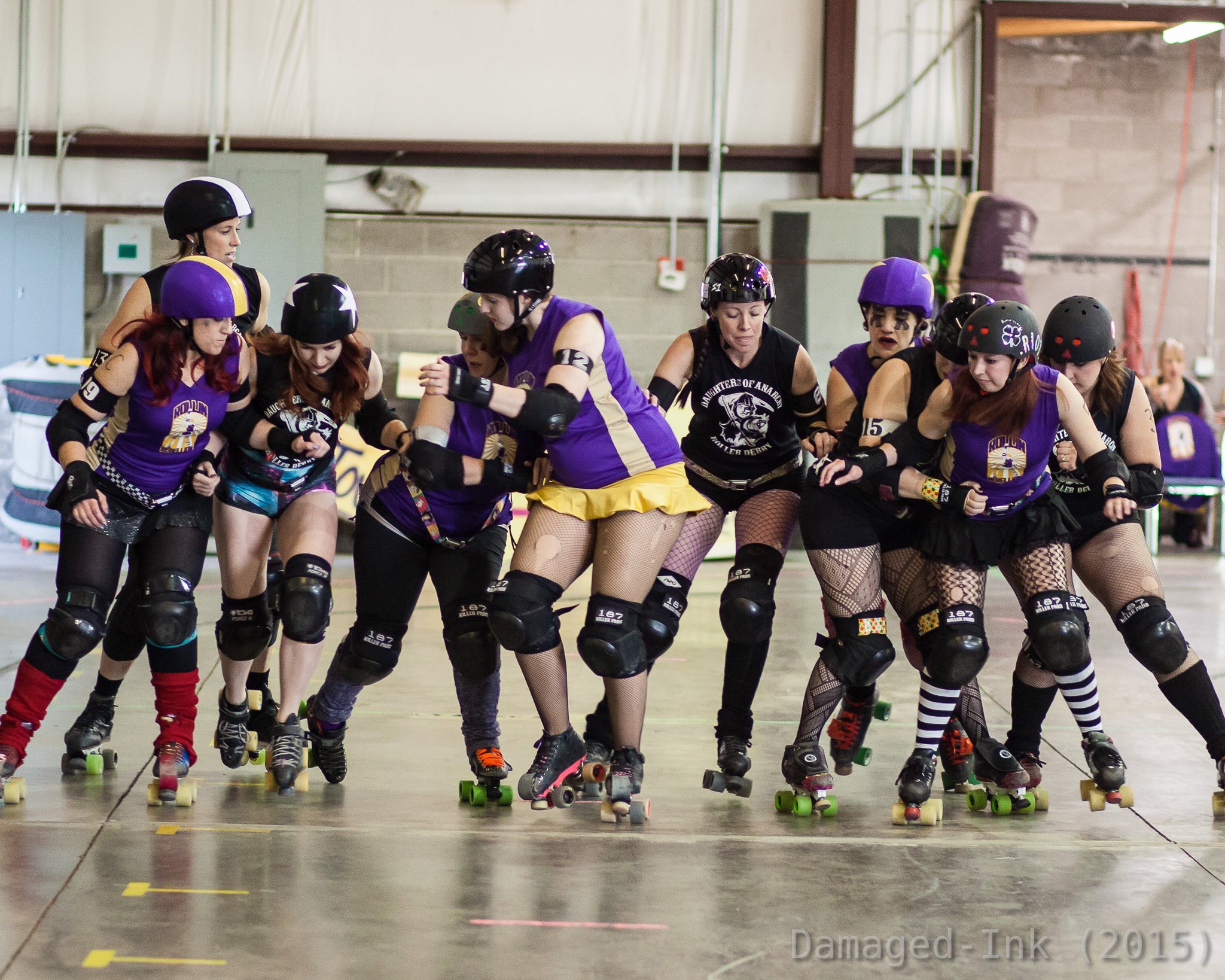 The last time I crossed the Salt Lake County line into Utah County—way, way down south—the ladies of the Happy Valley Derby Darlins were still operating and playing out of an old Food4Less Building. They had turned some very large number of square feet of an abandoned grocery store into their new HQ, the Shove Shack. Now they have a whole lot less square feet of a rental space, across the street from an animal shelter. Although it may be a much smaller venue, it is the new home of the Happy Valley crew.
With some donated stadium style seats—both near the main entrance and a set outside the side bay doors—rinkside seating is rather limited, so arriving early is a definite plus if you’re like me and like to see all the action as close as possible. The maiden voyage of the Shove Shack featured the Rollin Rebellion against the Daughters of Anarchy. Royal purple versus punk black, in a sense. As spectators filed in the small warehouse, a definite sense of excitement started filling the air. Everyone was excited to see Happy Valley in their new home.
With the end of the countdown to the start of the bout, Thundercats were go as the skaters started off the line with the Rollin Rebellion gaining lead jammer position. Their jammer and captain, Bloody 2 Shoes, snagged only two points before calling the jam off, but those two points got them started on the score board. I could tell right away these ladies spent quite a lot of time training and working on their skills. The defense was nearly impregnable, on both sides. The offensive plays worked hard to break through the tight defense, causing some fouls for the skaters in the jam. Both team jammers tried to use their skills, bodies and all their might to try and break through to start their scoring run.
The Rollin Rebellion, more often than not, was able to gain this coveted position, maintaining their lead throughout the first half. Red A Whips, Bizee Hummingbird and Hipknockher Therapy were just a few of the Rebel jammers kicking ass and taking names, along with points, but that isn’t to say that the anarchistic Daughters were any kind of slumps on the track either. Apart from a few penalties and knocked-out-of-plays, their strategy was to push hard, keep the Rollin Rebellion Rebel jammer contained and get their own jammer out of the pack and get points on the board, which definitely worked to an extent. The Daughters had lead jammer position, their blockers were definitely living up to their titles and blocking the Rebel jammer, making it damned near impossible for any to get past the wall of black. The first half ended at a score of 122–94, less than a 30-point difference.
As the second half got underway, it seemed like the action was becoming a little more brutal. Within the first jam of the second half, we were graced with a little jammer-on-jammer action. Normally, jammers tend to ignore one another, focusing on getting in and out of the pack to get their points. Mostly, the only time they do pay attention to the other is when they get lapped or are about to score. Rebel jammer Thrasher had lead jammer position, but Daughters jammer Pain in the Nikki caught up quickly and put a hard hip out, knocking Thrasher out of play. Luckily for Thrasher, she was able to call off the jam before Pain in the Nikki was able to score any points. That jam set the tone in a sense of what the rest of the bout would contain.
As in the first half, the Rollin Rebellion Rebel forces maintained their lead, but not without some major opposition from the Daughters. There were plenty of penalties on both sides, with some that went without being called, but sometimes the pack and the action within was so confusing, I can’t necessarily blame the refs. Even though they were trailing in points, the Daughters of Anarchy seemed to be the crowd favorite. Chants of D.O.A! continued until near the end of the game. However, although they seemed to be the popular bet, it was the Rollin Rebellion that ended up rolling away triumphant at a score of 205-172. To see the Happy Valley ladies in their new home, check out their website at happyvalleyderbydarlins.com or their Facebook at facebook.com/HappyValleyDerby.
Photos: