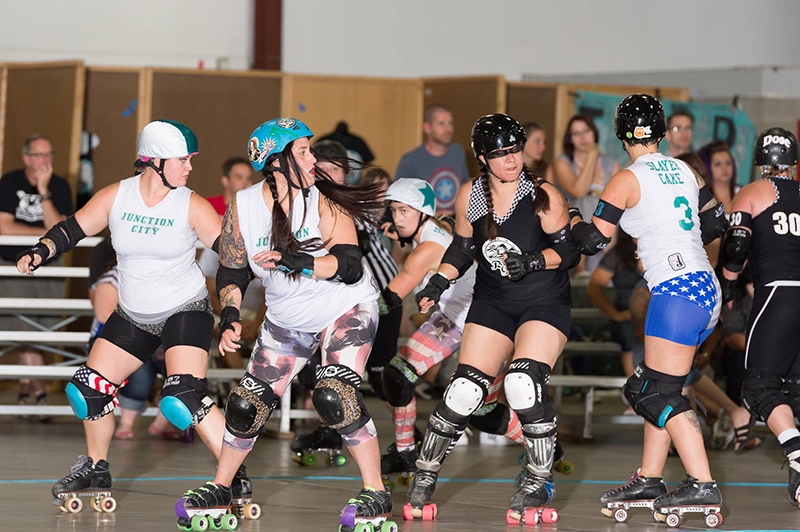 The rough, almost hour-long drive to Ogden, which is currently riddled with construction, isn’t the greatest trip to make, especially in the blazing heat we get during the summer here in Utah (add in the nonexistent A/C in my car and you have a recipe for disaster). But the ladies of Junction City Roller Dolls promised a night of double header derby action, which made the trip much more bearable.

The first bout of the night would pit the JCRD Trainwrecks against the Durango Derailers, out of Durango Colorado. The second was between the JCRD LOCO Motives and the Portneuf Valley Bruisers of Pocatello, Idaho.

As the first bout started, the Trainwrecks snatched the lead immediately, with their jammer Pickle scoring over 20 points. Her blockers did an amazing job keeping Durango jammer, Kill Eatcha, behind the pack, which led her to be knocked back and sent to the box on a penalty. The Trainwrecks kept pushing hard as the first half continued, pulling in multiple point jams. As the clock was nearing 10 minutes left in the first half, Trainwrecks were still dominating, and performing some spectacular plays on the track. Pickle, was jamming yet again, against Durango’s Bad Czech Bohotty. Once Bohotty managed to pass through the pack to make her scoring run, Pickle snatched up 4 more points, making a total of 19 before sliding through the outside of the pack and quickly calling off the jam, right before Bohotty could pass any skaters and score any points. Once half time hit, Junction City Trainwrecks were up 149-50.

The second half started with Bohotty in the box, which set the tone for the rest of the game for the Colorado girls. Junction City seemed to grab the majority of the lead jammer positions, and had some great defensive plays pulled off by their blockers. Now, that isn’t to say that the Durango skaters just sat back and played it safe, oh no. They pushed hard and unfortunately while doing so, racked up some penalties while trying to get back on track, literally and figuratively—a few cut tracks, forearms and back blocking just to name off a few. But with the game clock counting down, they couldn’t quite close the gap, ending the first bout at a score of 333 Trainwrecks, 107 Durango.

As it was Junction’s Military Appreciation Double Header night, the funds raised from the night went to support the Utah Disabled Veterans Fishing Foundation. To learn more about them and their cause visit them at udvff.org.

The second bout pitted Junction City’s LOCO Motives and the Portneuf Valley Bruisers. As the bout started, the Bruisers definitely lived up to their name. Killswitch Enskate burst out of the pack in the first jam, scoring the first 4 points of the game. From then on it was a back and forth of who was leading in points. The LOCOs would get a good scoring jam in, but then so would Portneuf. About ten minutes in, Portneuf’s jammer, Killswitch, had the lead jammer position and tried to call off the jam before LOCO jammer, Killa Patra, could hit the pack and score any points. Unfortunately for Killswitch, she called it off a bit too late, as Killa pulled off one of the greatest moves in flat track—jumping the gap, otherwise known as apex jumping. Loosely defined, jumping the gap is when a skater (jammer, more often than not) comes to the curve of the track, goes inside, and jumps from one point across the apex, or curved part, of the track. Now, while the description makes it seem relatively easy, in actuality, it is massively difficult. One could get hit out hard while trying to jump, get called on a penalty, or if they don’t land right, could be harmed. Killa Patra pulled it off flawlessly before Killswitch could call off the jam, scoring the LOCOs 4 points versus Portneufs 3. By halftime, Portneuf was leading at a score of 70-66.

With the second half, we saw a resurgence of LOCO offensive plays. Those ladies skated hard and fast, trying to pull in as many points as they possibly could. But with offensive plays, comes penalties, and the second half was riddled with penalties. Cut tracks, forearms, back blocks, oh my! But throughout all of this, both teams were pushing hard—both were very formidable opponents.

With the game clock showing only five minutes left, the LOCOs were desperately trying to close the gap between the scores. If only Portneuf’s defense was having it. Those ladies put up great defensive plays, and their pack always seemed to stay tight, refusing to let any LOCO jammer through. Their persistence paid off for them, as The Portneuf Valley Bruisers got to travel back to Idaho victors, at a score of 143-131.

To see more fantastic Ogden derby action from the lovely ladies of Junction City, peep their site at junctioncityrollerdolls.com, or stalk their Facebook like me at facebook.com/JunctionCityRollerDolls.