00:00 / 18:49
Spotify Stitcher
RSS Feed
Share
Link
Embed
The buxom babes of Junction City were our hosts of their 6th Annual Halloween Bout, which was to be a double header. First was a rematch between Junction’s Trainwrecks and Fort Collins, Colorado’s FOCO Girls Gone Derby. Then, the LOCO Motives against Flathead Valley Roller Derbys Big Mountain Misfits from Kalispell, Montana. 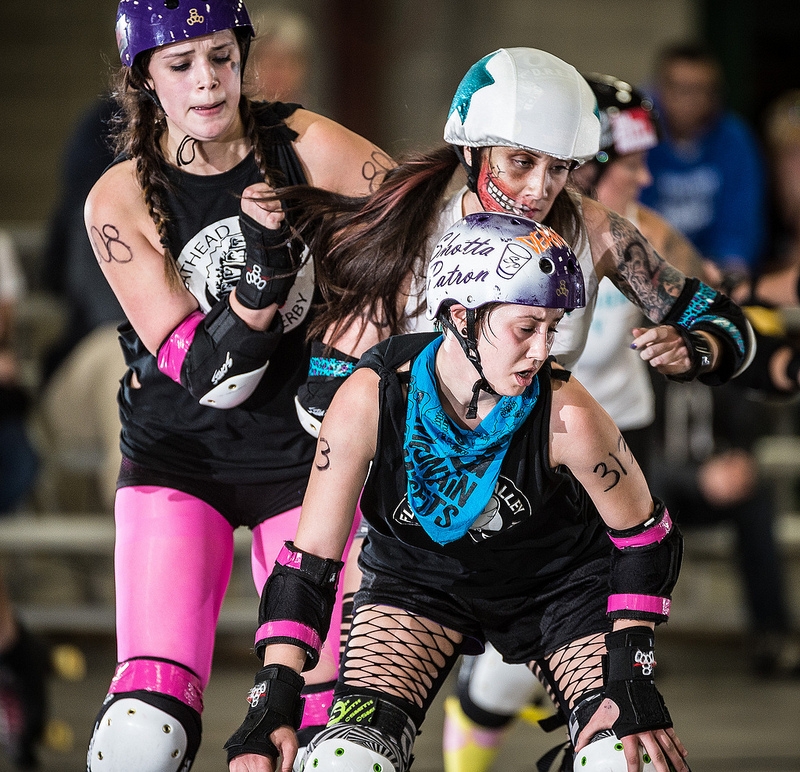 Sometimes, making the drive up to Ogden seems like a waste of expensive gas and time. When the destination you are heading towards is derby, any distance is worth it.

The buxom babes of Junction City were our hosts of their 6th Annual Halloween Bout, which was to be a double header. First was a rematch between Junction’s Trainwrecks and Fort Collins, Colorado’s FOCO Girls Gone Derby. Then, the LOCO Motives against Flathead Valley Roller Derbys Big Mountain Misfits from Kalispell, Montana. Funds raised from this game were donated to CAPSA, an organization created to “provide a safe, caring and confidential shelter, advocacy and support for victims of domestic violence and sexual assault; and to reduce incidents of abuse through prevention education.” To learn more, or to donate to their program, visit their site at www.capsa.org.

The first half started off a little slow, with Pickle of Trainwrecks only scoring one point, very different from her usual massive scores of 20 or more points per jam. But once the second jam started, the game became quite messy and confusing. Both teams seemed to understand the other’s stronger points and strategies, and seemed to specifically focus on keeping each other behind the pack and preventing them from scoring. FOCO seemed to dominate on the scoreboard in most of the first half, but it was not without difficulty. Junction’s Trainwrecks were putting up a fantastic defensive strategy, and slowly began to close the gap between the scores.

A little more than ten minutes to half time, Trainwrecks tied with FOCO, and scored another two points, changing the lead into their favor. That is until the next jam, where FOCO reclaimed their lead by Ms Eerie Bizness, FOCO jammer, who brought in a decent 15 points, while Trainwreck jammer Pickle was in the box on a cut track penalty. FOCO continued their lead for the next few jams, until Malibu Harpy of Trainwrecks scored a sweet 15-point jam, diminishing the score to 44-55. Pickle hit the track next, in a power jam situation as FOCO’s jammer, The Original Skankster, was sent the box on a cut track. Pickle brought in an epic 25 points for her team, bringing about another lead change with a score of 69-55. She repeated the same feat only one jam later, scoring another 25 points, ending the first half at a score of 95-55.

The second half brought with it a massive surgence of offensive plays from the Trainwrecks, with Pickle yet again scoring double digits, delivering 20 more points to their impressive lead. FOCO tried to fight against Trainwreck’s impressive plays, and sometimes succeeding. But more often than not, the Trainwrecks blazed ahead, with both Malibu Harpy and Pickle accruing multiple double-digit points throughout the rest of the bout. FOCO put up a good last effort, but it was the Trainwrecks who skated away victorious at a score of 260-93.

This bout started off explosive, and slightly viscous, in the way only derby can be. Flathead jammer Jenny From The Block put out a huge hit against LOCO jammer Mayhem Miller, knocking her out of play and causing her to call off the jam before Jenny could score any points. I think that LOCO was a little startled at the beginning of the first half, letting Flathead score a few points before they could get on the board themselves. They seemed to snap to it quickly, changing the lead into their favor by the fifth jam.

As with the first bout, another Junction City jammer shined within this game. LOCO skater Bee-A-Trix seemed to be on fire whenever she would come up to the line, scoring 25-plus points at times. LOCO was definitely pulling out their best plays and offensive moves, and it was quite the show to watch. In one of the last jams before halftime, captain of the LOCO Motives, Tough Titty Yeoman, pulled out the familiar move and whipped jammer Mayhem Miller out of the pack to great cheers from onlookers. By halftime, the score was 140 for the LOCO Motives and a mere 18 for Flathead.

Although the second half seemed to bring a little second wind to the Flathead skaters, it was LOCO who were bringing in the most points. More often or not, LOCO jammers would be right on the heels of Flathead when they had lead jammer position, causing them to call off the jam before either could score points.

The last jam of the night once again had LOCO jammer Bee-A-Trix in the spotlight, in another power jam situation, as Flathead skater Lit’l Sha Nana Gins was in the box on a penalty, leaving this Bee quite busy scoring 25 points and ending the bout with a very impressive score of 242 to 68.

It always makes me sad when derby season comes to an end––it also means that snow is on its way, and that just makes my grief that much worse. But make sure to check in with all of our local derby teams in the 2014 season, as I know they will have trained hard and will be ready to give all of us some great action to enjoy in the new year. Check out more photos of the bout by Chris Bojanower here.