00:00 / 16:39
Spotify Stitcher
RSS Feed
Share
Link
Embed
Men’s derby is not like your average roller derby. It’s filled with testosterone, power and, well, big hairy dudes. The jams are rougher, the hits are harder, and for me personally, the eye candy is better. When roller derby made its resurgence years ago, it was an all-female dominating sport. For the most part, it still is. But let’s be honest—we ladies couldn’t keep all the fun to ourselves.

March Mayhem: Uinta Madness vs Capital City Skull Crushers and the Continued Battle of the... 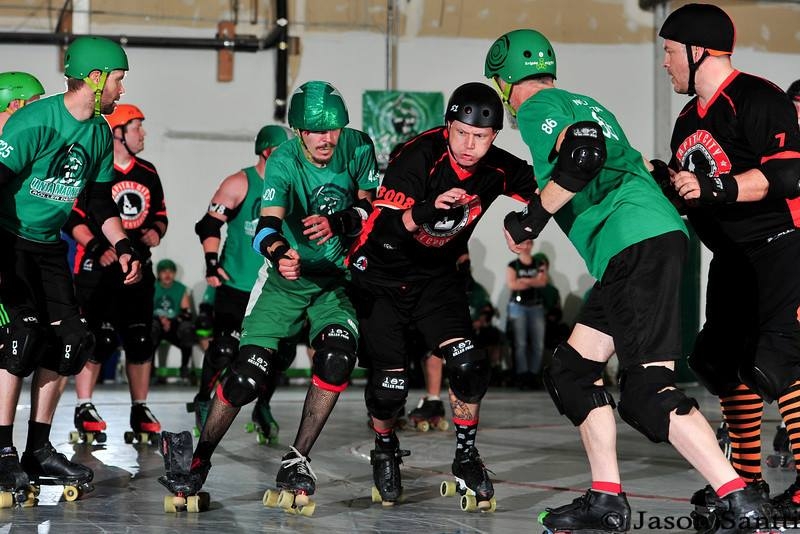 When roller derby made its resurgence years ago, it was an all-female dominating sport. For the most part, it still is. But let’s be honest—we ladies couldn’t keep all the fun to ourselves. That is the extremely condensed version of how men’s roller derby started, and Utah is lucky enough to have our very own men’s league, Uinta Madness Roller Derby¬¬—brother league to Wasatch Roller Derby. Since summer 2013, Uinta Madness has been recognized and ranked by the MRDA (Men’s Roller Derby Association) which is kind of a big deal, as Uinta has been around since 2009. Mild history lesson aside, it was a battle for the Brotherhood of the Quad—a DIY trophy that has been housed by the Uinta Madness at the Derby Depot since October of last year, when they won it back from the Capital City Skull Crushers of Boise, Idaho.

Men’s derby is not like your average roller derby. It’s filled with testosterone, power and, well, big hairy dudes. The jams are rougher, the hits are harder, and for me personally, the eye candy is better. The first jam started off a little rough and tumble, both teams scrambling for lead jammer, which made things messy. Eventually, Mr. Testosterone of Uinta scored the first 2 points of the game. Within the first few jams, it seemed like Capital City was going to take control of the game, getting a decent lead, and seemed to maintain the lead jammer position. Well, that sure ended when Milk Toast Boy of Uinta stepped up to the jam line. Blessed with a power jam situation, Capital City’s Quadracorn in the penalty box on a cut track, Milk Toast sailed through the pack again and again pushing up Uinta’s score and causing the first lead change of the night. It was certainly not the last power jam either, as Quadracorn seemed to make a little home for himself within the penalty box, spending more time within it than on the track. By that point, Uinta was sailing along at a score of 84-36.

Both teams had amazing defense and offense, and watching them clash was definitely something to write home about. Plus, the beards on some of the guys alone were noteworthy. As halftime drew closer, Capital City was doing their damnedest to score, and, unfortunately, sometimes landing in the penalty box to make it a reality. Even though their offense was trying to move forward, they certainly did not lack on their defense. Uinta had a hard time trying to pass through the seeming impenetrable line of orange that was the Skull Crushers blockers, but once the halftime whistle blew, it was only a 15-point game, with Uinta at 121 and Capital City at 106.

The second half proved to be very interesting for Capital City. They seemed to employ the “hit it and quit it” strategy, which, in my opinion, doesn’t really work long term, but definitely short term to close the point gap. It’s where a jammer gets through the pack as quickly as they can, snags lead jammer position and gets through the pack a second time—their scoring run—and just as quickly calls off the game after scoring their points. It leaves less opportunity for the opposing jammer to score their own points, but it also gets kind of annoying to an observer after a while. Capital’s strategy definitely worked, though, and a few jams into the second half, ended up changing the lead into their favor. Uinta did not take the upset lightly. I could see their own strategy morphing, and quickly. With less than five minutes left of the bout, Uinta managed to not only catch up to the Skull Crushers, but change the lead yet again with the aid of a few power jams.

At games, I truly try to remain impartial, just documenting the happenings, and congratulating each team at the end. But as the energy and the crowd became more and more incensed, I admit to cheering and screaming along with the spectators, and at times, yelling my own advice to the skaters. As Uinta was in the lead, it wasn’t extremely substantial, and they were fiercely guarding it to the best of their abilities. With less than two minutes left of the bout, each team was skating hard—Uinta trying to defend their lead, Capital City trying to surpass them. Within the very last bout of the game, SlamminAll, skating for Capital City with lead jammer position, pushed hard through the pack and quickly, maybe too quickly, called off the jam scoring only three points. With the official review over Uinta defended their Brotherhood of the Quad trophy, with a score of 189-187. A two-point game. It was an amazing bout to watch, and I look forward to seeing more from our boys of Uinta Madness. To check out their schedule or to catch up on their doings, visit their Facebook page at facebook.com/uintamadnessrollerderby. Check out more photos by Jason Santti here.