Ogden’s very own Junction City Roller Dolls promised a double header, and believe me when I say that they delivered in full. The first bout pit Junction’s Trainwrecks against the Cheyenne Capidolls from Cheyenne, Wyoming. The second match would be between Junction’s team, the LOCO Motives and Treasure Valley’s Boise River Rollers from Boise, Idaho all packed inside the Golden Spike Event Center.

Put Some Pride in Your Stride! Junction City Double Header 09.28 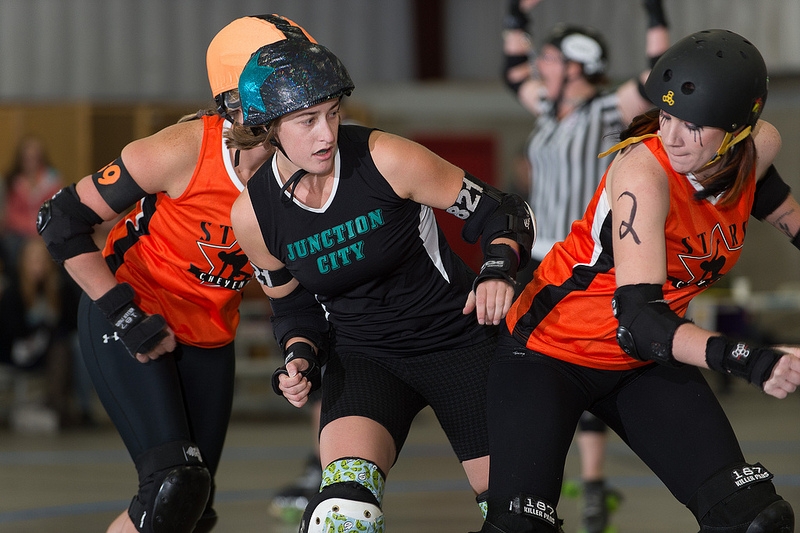 Personally, I love me some gays, and most days, I love them more than straight people. Seriously, how could anyone dislike a rainbow? Rainbows are like pure happiness and joy and warm snuggly kittens (or puppies, whatever fluffs your puff). The sponsor of the bout was PFLAG’s Ogden chapter. PFLAG is a non-profit organization that involves parents, friends and allies united with LGBT people to move equality forward. My personal political views aside, the real headliner of the night was Roller Derby. The hosts of the evening, Ogden’s very own Junction City Roller Dolls, promised a double header, and believe me when I say that they delivered in full. The first bout pit Junction’s Trainwrecks against the Cheyenne Capidolls from Cheyenne, Wyoming. The second match would be between Junction’s team, the LOCO Motives and Treasure Valley’s Boise River Rollers from Boise, Idaho all packed inside the Golden Spike Event Center.

As the first jam started off, the Trainwrecks showed some fantastic defense against the Capidolls, especially since their jammer, Pickle, was sent to the box on a cut track penalty almost immediately as the bout started. Cheyenne ended up scoring the first points of the game, but their minor lead didn’t last long, once Malibu Harpy and Mayhem Miller hit the track in their respective jams and knocked a combined 16 points on the board. A few jams into the first half, Capidoll jammer Infinity lost her panty, and no not her ACTUAL panties, but the panty on her helmet that identifies her as a jammer. She ended up being blocked behind the Trainwrecks defensive wall after recovering it, letting Pickle score 10 points. I’m not sure why, but the entire bout was filled with cut track penalties, it was like some weird derby version of Oprah. You get a cut track, and you get a cut track, YOU get a cut track, EVERYONE GETS A CUT TRACK! But it didn’t stop the Trainwrecks from raising their lead higher and higher, ending the first half at a score of 115-20.

The second half started off with a Cheyenne jammer in the box on a––you guessed it––a cut track. It continued on from there, with the Trainwrecks steadily rising in points, Cheyenne sometimes scoring, but rarely against the superb defense that Junction was rolling out. With only about 10 minutes left of the game, the Capidolls were almost about to hit 50 while Junction was cruising at a cool 200 points. They tried to attempt to close the gap, but as the final seconds were ticking away, it was kind of fruitless. Junction pulled out of the winning station at a score of 281-54. (Yes, that was an attempt at train humor.)

The second bout between the LOCO Motives and Boise River Rollers started off pretty damn ruthless and basically set up camp on the track. Boise’s defense was something to be reckoned with and I could tell that the LOCO Motives were feeling it. I’m not sure if the LOCO girls were in a bit of shock from their aggressive offense and defense, because they dragged a little behind on the scoreboard within the first few jams. Around the tenth jam or so, they started getting their shit together, pulling out better communicated plans and bringing in the points. Boise attempted at playing catch up, but it seemed Junction was very adept at playing “keep away.” With some fantastic defensive plays, LOCO jammers were slipping through the pack with relative ease. Like the first bout, there were plenty of penalties, including but not limited to a plethora of cut tracks and back blocking. Half time came out of nowhere, from all the action happening, ending at 105-47.

It seemed to become an almost tug of war in the first few jams of the second half, with Junction getting lead jammer position and a few points, then next jam, Boise would do the same, and back and forth. In quite a few of the jams, only two blockers would remain on the track with all four of the opposing team’s blockers to fight against. This lead to some very interesting plays from both teams, and I seriously think these girls are part ninja with the way they duck and weave through the pack, taking split second advantage of whatever distraction may arise in the heat of the jam.

With the end of the bout drawing ever nearer, Boise started pulling out any means necessary to gain points, and they were accomplishing that feat. Within a few jams, they started easily closing the gap until the second-to-last jam, where they managed to change the lead into their favor by means of the LOCO Motives, scoring the tipping 4 points, making the score 171-170. This became a serious nail-biting moment inside the Golden Spike Arena. Fans were going absolutely bonkers, screaming encouragements to favorite skaters, boos and denials at the opposite team. The noise became a cacophony in the very last jam, as the seconds were drifting away, and the end loomed ever closer. In an utter fortuitous turn of events, Junction jammer, Bee-A-Trix, slipped through a hole in the pack gaining 5 points, but did she stop there? No. No true derby girl ever gives up until there is no other option, so she scores another 3 points, making the LOCO Motives victorious at an extremely close score of 178-171. Boise put up a beautiful fight with amazing defense and were definitely a worthy opponent of our native Utah babes of Junction City Roller Dolls, along with the ladies of Cheyenne Capidolls. Everyone involved made the night a smashing success, and it was such a pleasure to be a part of it. To find out more information or upcoming games for Junction, visit their website here or their Facebook.