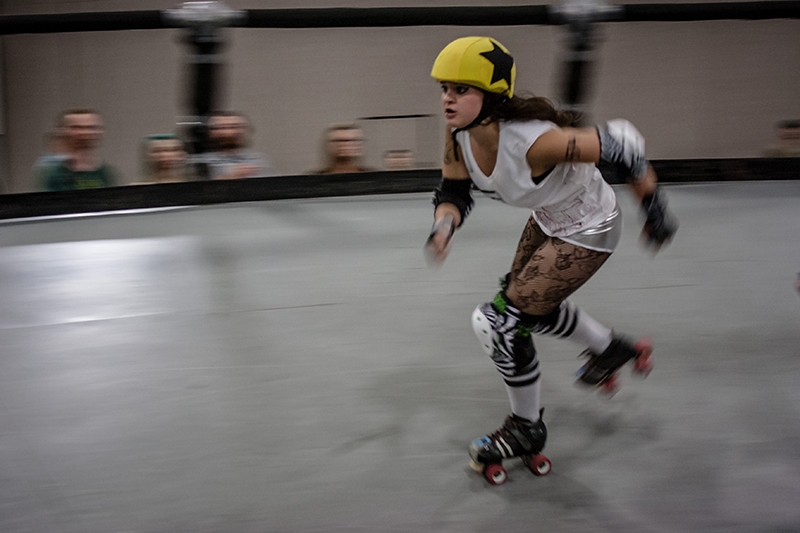 When most people think of derby, many think of the old school ‘70s era of roller derby, where there was no true scoring system, they just skated round and round the track, and pulled off some groovy vintage skating tricks. Compared to derby today, especially banked track roller derby, it’s a night and day difference. Besides the most obvious difference of banked track versus flat track (banked track being elevated and angled and flat track being, well, FLAT) there are quite a few more contrasts the casual derby attendee might not be aware of, although going through every single one will take eons and eventually my fingers would tire from typing so much, cramp, and become horribly disfigured and I really don’t want that to happen so I’m just going to touch on the basics. In a flat track jam, the timer is set to two minutes, whereas in a banked track is only set for one minute. Skaters cannot skate backwards or skate clockwise. If you’ve attended flat track games, even only once, you’ve probably seen skaters, jammers especially, when hit out of bounds the hitter skates backwards as far as they can to either delay that jammer or to have them receive a cut track penalty. Not so in banked track. Also, penalties are served after the jam in which they happened, not immediately like in flat track. Well, I hope you enjoyed your minor lesson on a few of the differences between banked track and flat track. And without further ado, let’s get to the action of the night.

The Salt City Derby Girls are Utah’s first, and so far, only banked track league. Formed originally in 2005 as a flat track league, they made the transition to banked track in 2011. This last Saturday was their official opener of their 2014 season, pitting black against white—the Wrist Guards versus the Razor Blades.

The first jam or two started off a little slow, as both teams seemed to be a little lax on their strategies. They started getting into their respective grooves and points started appearing on the scoreboard. The Razor Blades were pushing hard on their offensive tactics and it was definitely yielding them impressive results. By jam 8 they were leading by 15 points, but not without some heavy opposition by the Wrist Guards. After the first quarter we saw our first lead change in the Wrist Guards favor, and they fought hard to keep it. Both teams’ blockers were always seeming to be hard at work, pushing the pack hard and trying valiantly to block opposing players and keep the jammers behind them. By half time, Wrist Guards were leading 58-55.

Once the second half launched, the Razor Blades seemed to decide that enough was enough, and pushed their offence and defense to the next level. Lady Rage, Razor Blade jammer, scored 10 points first jam into the second half, and it continued on much in the same manner. But, never fear fellow derby lovers, the Wrist Guards did not take this upstart lightly. Pushing hard on their defense, with some great moves coming from all of their blockers, including some notable skating from Col. Skirts they managed to close the difference between their scores to single digits, and eventual multiple ties.

It was a battle for the leading score in the last few minutes of the bout. Both sides attempting to advance, while simultaneously trying to keep the opposite behind them, but once the final whistle was blown, and all points, penalties, and deliberations finalized, it was the Razorblades who arose victorious at a mind blowing score of 115-114. A single point separated them from the Wrist Guards. It was an amazing season opener, and I definitely look forward to all that the kick ass ladies from Salt City Derby Girls have for us. Their next bout is on June 28, located at the Salt Palace, or otherwise known as the Salt City Derby Palace. To find out more information about their season look them up at saltcityderbygirls.com or their Facebook page.