Skip to content
MENUMENU
Shouting and whistles echo through the warehouse, christening the “Derby Depot.” I walk by the oval-shaped track where nearly two dozen skaters practice to the rhythm of blasting music. 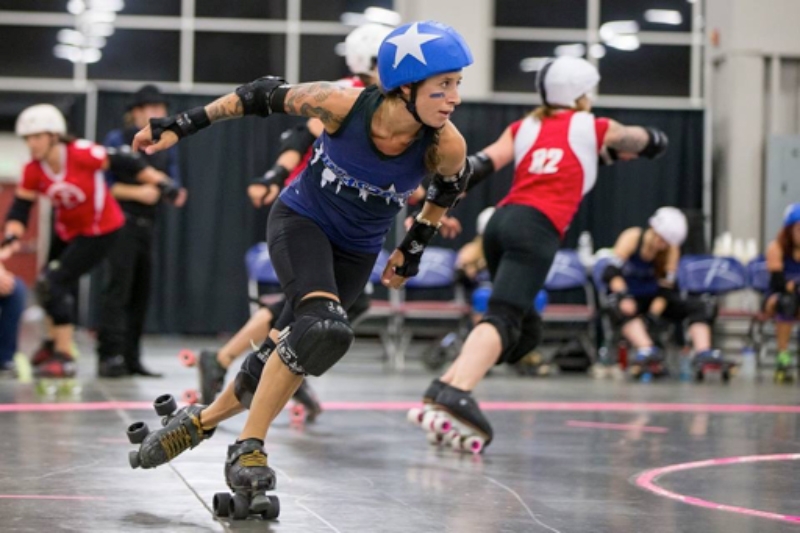 Jammer Dr. Octopushy speeds around the track. Photo: Void Pointer
Shouting and whistles echo through the warehouse, christening the “Derby Depot.” I walk by the oval-shaped track where nearly two dozen skaters practice to the rhythm of blasting music.
Some girls are strapping on pads, others are skating backwards and a few are stretching as they glide past others on the track. These skaters belong to Midnight Terror, Wasatch Roller Derby’s travel team. The Derby Depot hosted the WFTDA (Women’s Flat Track Derby Association) Division One International Playoffs in September of 2014. Since then, there have been a lot of changes in the management at the Derby Depot.
I have the opportunity to speak with Sara Baldwin, a.k.a. “Penny Slain,” about how the recent change in Wasatch Roller Derby’s management has transformed the community, the skaters as well as the future of roller derby in Salt Lake City. She’s one of the two co-captains of Midnight Terror. With over five years of roller derby experience under her belt (and the majority of that with WRD), Penny knows the ins and outs of derby and the league.
Penny begins telling me about how the recent passing on of Wasatch Roller Derby’s (WRD) management has affected the roller derby community. “After years and years of derby and building [Wasatch Roller Derby] to what it is, Honey (Lacey Peterson) and Medusa (Brandi Olsen) were kind of done,” Penny says. Back in 2008, this derby duo started Women’s Wasatch Club. This nonprofit organization was the umbrella business over all the teams at Wasatch—Wasatch Roller Derby, the Red Rockettes (recreational derby), Uinta Madness (men’s team), and the Juniors (for those 18 and younger).
Although they were ready to retire from roller derby, Honey and Medusa wanted to keep their non-profit, Women’s Wasatch. However, because the lease, DBAs and other legal aspects of the Derby Depot were in Medusa’s name, transferring both the logistical and legal responsibility of Wasatch Roller Derby to another person became much more complicated.
Hoping that someone would step up to take over the Depot, Honey and Medusa got a six-month extension on the lease before they retired. But the lease for the Derby Depot is very expensive (around $85,000 for two years) and, needless to say, not everyone jumped at once for the opportunity.
To make a long story short, Wasatch Roller Derby had a 45-day window to find a person to step up and sign the lease and commit to the responsibility of running WRD. In the end, Jen Jessup (Wreckless), Orange CrusHer (Angelee Dean), and Jane Accostin (Carrie Snow) stepped up to the plate. In Penny’s words, “They took on the risk. We saved the warehouse and all the leagues are more united because of that.”
With the new leadership, the help of some generous private donors, detailed talks about the budget and promotional potential, as well as a holiday fundraiser that gathered $5,000, the warehouse was back in good hands and on the road for a secure, revamped future—all in a miraculously short period of time.
With the new management, the different teams combined to start their own LLC called United Roller Sports of Utah (URSU for short) and are currently doing their best to convert this to a non-profit. (Due to certain groups which exploited the benefits of non-profit organizations, the IRS has made the requirements much more strict, making it harder for URSU to become a non-profit organization quickly.)
So what does the new management mean for the community? Under Honey and Medusa’s management, over 40 percent of the net profits went to a highlighted charity of the month, resulting in thousands of dollars of donations. Some of the organizations Wasatch Roller Derby has donated to in the past are: Camp Hobé, The Utah Humane Society and Wasatch Gardens. The new management wants to continue this legacy of charitable donating, both to previous charities and to new organizations in the future.
For Midnight Terror, this year and last year have been all about building up the team. At the peak of their career, the team ranked 19th nationally; now the team ranks 33. The league’s goal is to make it to the top 20 and maintain a high-ranking position. “Having a Division One team brings in a lot of interest, talent and transfer skaters,” Penny explains. “It’s more marketable, too—we can host tournaments like we did last September.”
Although Wasatch is looking for additional involvement from the community, this search isn’t limited to those experienced in roller derby. They would love to have help from individuals with experience in accounting, knowledge in 501(c)(3)s, good connections with other non-profits, or just a desire to get involved.
That involvement includes the basics—new skaters. As for newcomers who might be nervous about intentional collisions while racing around a track, don’t worry. Penny says not to be discouraged. “My first bout, I was on my ass more than I was on my skates,” she says.
Derby might be right for you if you’re looking for…
According to Penny, seeing the empowering effect of derby on herself and others is part of what keeps her playing. Her advice for someone who hasn’t heard much about derby and wondering how to find out more? Check out a bout. For Penny, her introduction to derby was seeing a bout—“it changed my life, she says” Then, talk to a derby girl. She’ll give you the scoop on the derby scene.
As Penny says, “Wasatch as all levels of derby,” for men, women, juniors, officials, and fans. So whether you’re a natural athlete or you’ve never skated in your life, “there’s a level of derby for you.” That being said, the next bout at the Derby Depot is on May 16, featuring the Black Diamond Divas vs. Hot Wheelers. You can check it out and, like Penny says, “See if it piques your interest.”

For the full schedule, check out the league’s events here or explore their website.