A Hot Wheeler blocker knocked Bunz Bunny out of play with a beautiful hip check, letting Stache Bot of Wheelers gain lead jammer and scoring their first three points before being knocked out of play herself and calling off the jam. After that, the Hot Wheelers dominated on the scoreboard and on the track. 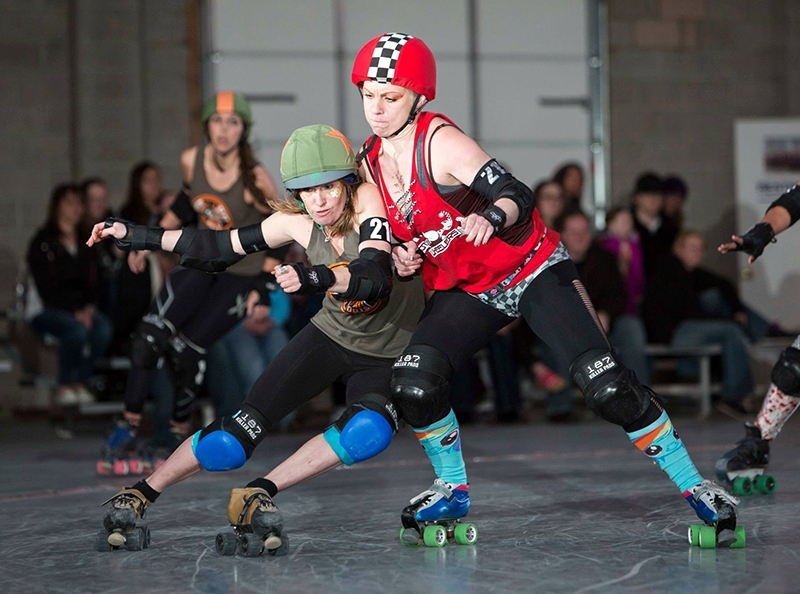 The beginning of derby season marks another beginning for me—the start of spring. Well, the extremely short-lived spring that never seems to last as much as we’d like it to in our lovely state of Utah. But c’est la vie. We have derby and that is more than good enough for me. This last Saturday we had both Wasatch Roller Derby teams, the Salt Flat Fallouts and the Hot Wheelers, facing off for the second bout of the WRD season.

The bout started slightly anticlimactically, with Salt Flat jammer Bunz Bunny in lead jammer position calling off the bout before Hot Wheeler jammer Skull Candi could meet the pack and before either could score points. The second jam was when things started getting interesting. The Fallouts scored the first points of the jam courtesy of their jammer, Wreckless. I’m not sure if it was because they scored the first points of the game, but the Hot Wheelers retaliated and got offensive in a big way. A Hot Wheeler blocker knocked Bunz Bunny out of play with a beautiful hip check, letting Stache Bot of Wheelers gain lead jammer and scoring their first three points before being knocked out of play herself and calling off the jam. After that, the Hot Wheelers dominated on the scoreboard and on the track. Skull Candi cruised through the first pass of the pack on the outside with no opposition, scoring lead jammer position and scoring a massive 15 points in a power jam, as a Fallout jammer was sent to the penalty box for a jumping hit misconduct.

And it so it continued, with Hot Wheelers always seeming to stay ahead of the Fallouts points-wise, but not without some great defense from Fallout blockers. With only two minutes left of the first half, Arc Flash, lead jammer for the Fallouts skated hard and scored her team points, but as the clock ticked down, the first half ended at a score of Salt Flat Fallouts 48 to Hot Wheelers 76.

As I’ve said before, roller derby loves charity. This bout was no different—its featured charity is Camp Hobe, a summer camp for children and youth 4–19 years of age. It’s designed for children with cancer and their siblings, who are sometimes forgotten in the cancer experience. Camp Hobe serves children from the Intermountain area (Utah, Idaho, Wyoming and Nevada) or those who are being treated at Primary Children’s Hospital here in Salt Lake. These kids get to experience regular camp activities just like other healthy children, whose families are not affected by cancer. To learn more, or to make a donation visit their website [www.camphobekids.org]. Forty percent of the net proceeds of the night’s bout went toward Camp Hobe.

The second half seemed to give both teams a new wind—both their offense and defense pushed each other. Skull Candi, once again jamming for Hot Wheelers, pushed out of the pack with superb skill. The Fallouts blockers were definitely not pleased and kept giving her hard hits with her first run, but she managed to score five points before ending the jam. But fear not, derby readers, the Fallouts did not take this lightly. Jammers Bunz Bunny and Wreckless managed to score a combined 23 points over the next few jams, changing the lead into the Fallouts’ favor at 84–81. Their lead, however, was short lived as Skull Candi found herself in lead jammer position and also in a power jam situation, with Bust-Em Buxom in the penalty box for a back block. Skull cruised through the pack with ease again and again, eventually scoring a whole 24 points, changing the lead back into the Hot Wheelers’ favor at 105–89. It seemed the Hot Wheelers were determined to keep the lead, scoring points almost every jam even if it was just a handful. The time clock kept creeping ever closer to the end of the bout, and it just seemed to push the Fallouts to skate harder and more aggressively. With about five minutes left it seemed like there might have been a chance of the Fallouts closing the score gap, having gotten a power jam in their favor. Though they put up a great fight, the Hot Wheelers remain undefeated in the 2014 season so far with a score of 171 to 149. Check out all the news and home games Wasatch Roller Derby has in store for us on their Facebook page or their website, wasatchrollerderby.com.

Check out more photos from the bout by O’Durgy here.