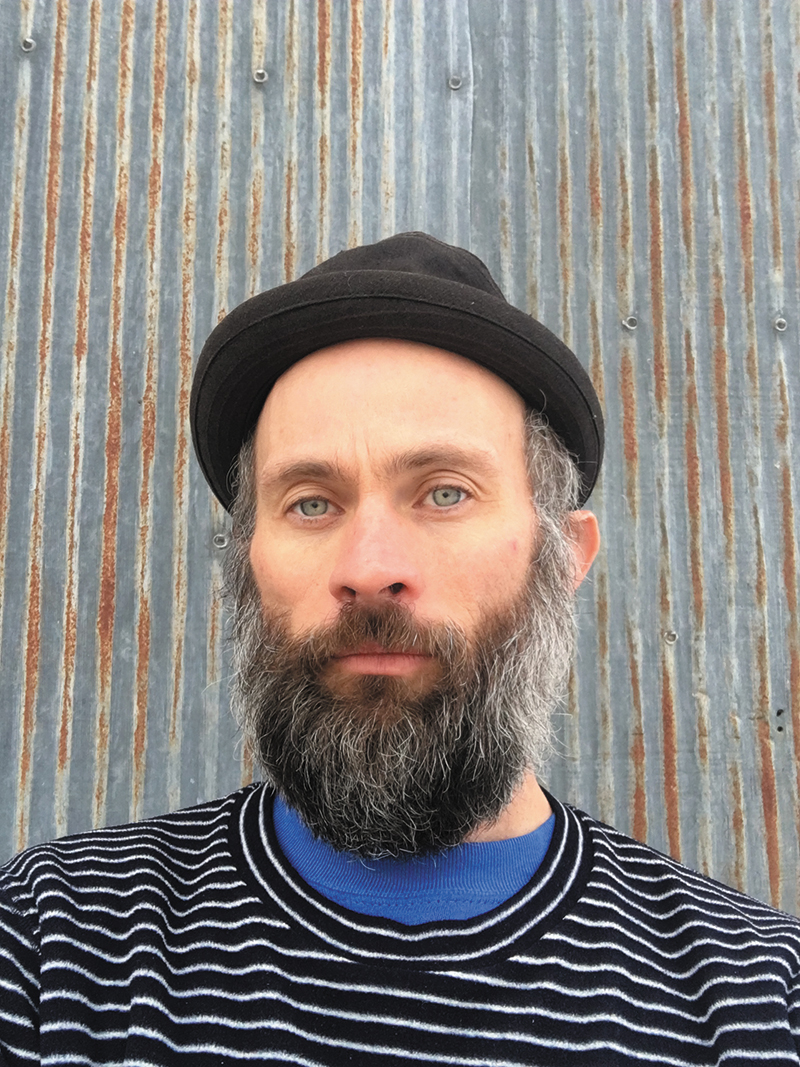 Water Witch, the bar we know and love at 163 W. 900 South, has been hiding something from us: poetry! For two years now, Water Witch has been hosting monthly poetry readings called Witch Lit, curated by the Witch’s own Matthew Pfohl and the Midwestern-poet-gone-rogue Abraham Smith. Smith is the Co-Director of Creative Writing at Weber State whose latest book-length poem, Destruction of Man, was published by Third Man Books, the literary arm of Jack White’s Third Man Records.

It all came together in the late summer of 2017 when Smith’s friend Aubrey Lenahan visited him from Portland after moving here for his position at Weber “after many moons in Alabama.” Water Witch’s reputation naturally drew them in. “Chums had described it to her as the best bar west of the Mississip’,” Smith says, “and dang, were they right.” As it turns out, Pfohl is a “self-described washed-up slam poet,” and the three of them uncovered their deep, mutual passion for poetry that led to the birth of Witch Lit. It also led to the three of them yelling out some poems to the few, unsuspecting patrons in the bar that night. “Poems do insist some sweet times,” Smith says.

Curated by a “washed-up slam poet” and a “Midwestern-poet-gone-rogue” Witch Lit is just one of Salt Lake’s literary wonders.

After only a few weeks in town, Smith’s reputation as a community builder had already made its mark here in the valley. He describes Utah as a “confection of literary wonders” to which Witch Lit is happy to contribute. He heralds the unique atmosphere in Ogden and Salt Lake that allows people with ideas free reign to explore them, compared to some other places that present more of a barrier to newcomers trying their hand at the literary scene. When the good people outside of Utah think of us, their first thought might not be to think of it as a kind, open and adventurous place. But once you’re here, it’s not hard to see.

“There’s not a whiff of exclusivity around here, to be sure,” Smith says of Witch Lit. “Please do join us for a reading and sign up for our email list. Or stop by the Witch and ask to be placed on the list, or reach out via email—directly my way or Matty’s way.” It’s a big enough place for things to be happening, and it’s a small enough place that you can still participate in them without having to fight the crowds to get in.

“There’s not a whiff of exclusivity around here, to be sure.”

Many of the performing poets are Utah residents, coming from Ogden, Logan and Salt Lake City. In that list are poets who have 10 books of published poetry under their belt, others who don’t normally let their work see the light of day and writers with publications in literary and poetry journals. In addition, they even do open mics from time to time. With Smith’s connection to the Weber State Visiting Writer Series, the people coming from out of town to participate in it will often stop by for a quick reading the night before. Pfohl and Smith “curate a series where all aesthetic slants are welcome,” Smith says. “We want the community inside to mirror the community outside.”

The range of styles isn’t just an extension of Smith’s own agrarian punk poetry. Smith says, “Our mission is to stretch the welcome mat wide as Nebraska. I am not aiming to showcase folks aligned with my way. Thank goodness, or everyone would be deaf from all the unmannered yowlhowling!” He earnestly does do a lot of that, by the way. At the venue inside Third Man Records in Nashville, he read his Destruction of Man in its entirety. His vitality and lyricism are really something to see. And you can—at Water Witch!

Before you start to wonder if poetry is too transcendent to be read in a bar or that a bar is no place for these cultured types to be, think again. Poetry is a way to get in touch with the wild-child side in all of us. It’s a witchy thing to do, and even if you don’t think you’ll be writing any of your own words down anytime soon, just listening to it can work wonders to soothe the soul. This is something Water Witch has been striving to do since its creation, in every aspect. Witch Lit is in no way separate from the Witch’s pursuits of building community: a neighborhood bar with a spectacle-free return to the fundamentals of craft cocktails for everyone to enjoy. Witch Lit just uses more words and less limes.

“Our mission is to stretch the welcome mat wide as Nebraska. I am not aiming to showcase folks aligned with my way. Thank goodness, or everyone would be deaf from all the unmannered yowlhowling!”

Due to the size of the bar itself, the Witch Lit series has kept a low-key profile. They don’t advertise or post online (a true occult organization if I ever saw one). But behind the secrecy is poetic beauty and friendly faces, and we here at SLUG can’t help but point it out to our readers.

You can reach Smith at abrahamsmith@weber.edu and Pfohl at matt@waterwitchbar.com to get on the email list. Water Witch is closed on Mondays, and that’s when Witch Lit gathers—typically the first Monday of the month. The series has been on a mini-hiatus while Smith has finished up the fall semester teaching over in Munich, Germany, but if you’re interested in getting on the email list, just remember to ask the bartender about it next time you’re at Water Witch sipping something smoky and delicious out of one of their jícara bowls.