A Not So Rough Life at Roughside III 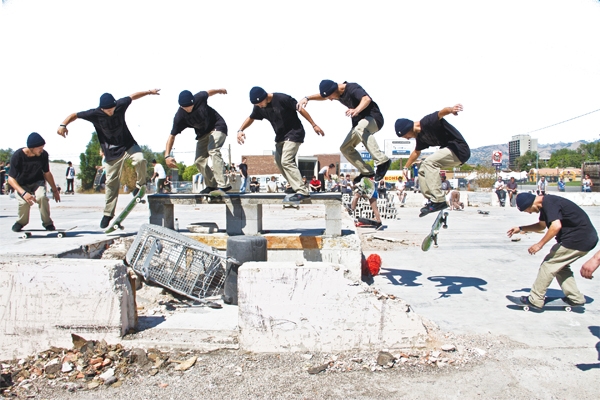 When I arrived at Fairmont around noon, it was already starting to get hot. There were a few groms shredding around, and the People Water guys were already passing out bottles of water to skaters and anyone else who passed by. It was shortly after the SLUG marketing girls arrived to set up the tent and run registration when Johnny Roughneck showed up with a bullhorn bellowing, “I thought I told ya, I’m a Roughneck Soulja!” While those pretty SLUG girls ran registration, Roughneck ran a best trick contest up the Euro gap. It was during this that I started to realize all of the incredible talent we had enter this year. It was the twins, Jordan and Nate Brown out of Bountiful, who took the product from the park, though. Jordan stomped a BS 360 kickflip and, shortly after, Nate did the BS 360 heelflip for the best trick win. Since this was the Roughside contest, there was no way we were staying at the skate park, so we loaded up the People Water bus, the Scion xB and all of our cars in a caravan and headed to the first official stop of the Roughside tour.

The Dust Bowl is a new DIY addition to the long list of Salt Lake skate spots. It’s right off of State St. and 2300 S. You have to crawl over a broken-down fence to get to it. Local shredder Gabe Segura built some benches on the perfectly smooth concrete of the demolished building—one normal bench and one bench off of a two- to three-foot drop. As skaters visited the bowl, it slowly evolved into a small haven with a down bar fence rail and a small gap over a shopping cart and some debris. There are really so many possibilities here, depending on your imagination and the size of your marbles. Levi Faust stepped up to the plate, grinding crooks on the rail. Off the bench drop, Matt Fisher slid front tail to 270 out and Brodie Penrod landed a BS tailslide kickflip out, bolts off the drop. The downside of The Dust Bowl is the hundreds of fart rocks ready to squeeze themselves under your wheel, making your board come to a screeching stop and sending your fish-like carcass straight into the ground. Bring some liquid nails if you go test it out, because the boys shredded the angle iron off the benches. After the spot was destroyed, it was once again time to load up the caravan, headed by the new Scion xB––in which Penrod and Roughneck had the privilege of riding to the next spot.

We went from one of the newest spots in Salt Lake to one of the oldest: Liberty Park. It may be old, but it’s still one of the best. The crowd started to grow when Penrod did a huge switch laser. Caleb Orton had the people flocking when he did a crazy ollie south and a backside flip down the big three. Close to a hundred people gathered together to watch Roughside at its finest. Faust and Morgan Cope were skating so hard, they had to take a short break to ride the paddleboats around the pond while Roughneck scrambled everything up, sending everyone to Bonneville Elementary, with Orton and his pup, Basil, riding shotgun in the Scion.

Bonneville Elementary is a school built for skateboarding. There are a bunch of these planter box ledges lined up in a perfect row all over the place, and a big four block to jump down. The only problem is that they have blocks on the ledges, so you can’t skate them, but you can still jump the big four! The big four was a huck fest––so many tricks went down. Some kids even left their soccer game to come watch skateboarding—it was an amazing sight. Roughneck kept yelling that time was running out, so kids would huck a bit harder, even though he had them jumping up and down the stairs for over 20 minutes. Little Dino Porobic got the ollie first try, but had to work hard to knock out a FS 180. Faust took some diggers before he got a nollie inward heelflip. Aiden Chamberlain got a frontside big spin. Orton busted out some grabs going tuck knee, then switched a switch Japan. Aaron Schwendiman did things a little backwards by grinding up the four block. We originally planned on hitting up another spot, but Roughneck threw these kids down the stairs for so long, more would’ve killed them. So, instead … We partied!

Everyone without a car bailed on their ride and bombed down the hill with the crew toward Fice. The People Water bus had to stop along the way and pick up kids, and the Scion made its way with Jordan and Nate Brown riding in style. The party was popping when everyone arrived at Fice. There was a lot of stuff going on: free hot dogs and brats courtesy of SLUG, the Scion xB was chillin’, and Roughneck and Panda Spliff threw a solid product toss from all of the sponsors––Scion, Roughneck, People Water, Sk801, Saga, Milo, Blindside and Salty Peaks. Roughneck even brought some gear from Coalatree to throw. Copper Palate Press was doing free Roughneck screen prints, as well as the Summer of Death logo. A high ollie contest over some cardboard boxes started up, and Sk801’s Jason Gianchetta couldn’t help stacking on a few more boxes for the win. The overall winners (judged by Panda, Eric Hess and T-Coy), took home some awesome prizes, including numbered, limited-edition, recycled cruiser board trophies handmade by Millworks Board Mfg (Schwendiman’s company). Brodie Penrod was the wizard of the day taking first, Caleb Orton took second and Levi Faust took third. Nate and Jordan Brown took home the Best Digger trophy.

The Roughside Contest gets bigger and better every year. If you weren’t there this year, be there next year—it’s sure to get a little crazy.