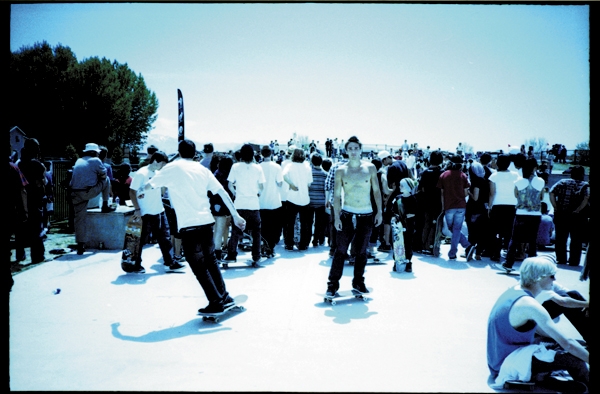 Above the Crowds: Kevin Fedderson

Everyone knows that a lot of the younger skateboarders today are progressing at a level beyond comprehension, and that’s exactly what drew me to Kevin Fedderson in the first place. I remember running into him at Sandy Park when I was still in high school and every time I saw him there, he had at least two or more new tricks dialed in and on lock. We met up on a Saturday to go skate and just to get to know each other a little better. The day couldn’t have been better.

I texted him around 8:15 in the morning just to make sure he was still on his way downtown to get some photos and skate. The best hours of the day to skate are before noon (in my opinion at least) and he was awake, soon to be on his way to Trax to come meet up. There was one spot in particular that I had in mind for him to get a photo on, but after arriving, the landing and takeoff were a bit much even for him, and that says a lot seeing that he can pretty much do any trick you could ever think of. So we headed back to the car to go home and get the sequence camera before going to the library for some sweet manny pad action. The camera wasn’t charged, so Kevin, Chris Swainston and myself headed over to Ninth and Ninth Park to get warmed up for the day while the camera’s lithium ions were regenerating. Just watching him skate the park showed pure passion in what he does. He would skate the oddest obstacles, land the trick and move on, all while donning a huge smile. Swainston inquired as to where he skates most of the time, to which he responded, “I usually warm up at Sandy Park and then just wander from spot to spot. That’s the best part about skateboarding for me … not knowing where you are gonna go skate.”

We all unanimously decided it was time to leave, picked up the charged camera and headed over to the library to get some city skating in. Kevin lives down south so he hardly gets to skate downtown and upon arrival, he was amazed at all the possibilities of the library plaza. We briefly spoke about his main sponsor, Element, and what skating for them is like. “It’s pretty rad skating for them, I get jeans, shoes, shirts and a couple of decks each package. It’s totally a company I am 100 percent behind too, I see a lot of kids riding for companies just to get free stuff, but I am proud to be a part of their whole motto, Power to the Planet. I am psyched I get to wear a shirt that’s organic, made with soy ink, just to lessen our impact on the planet.”

Kendall Johnson and Eric Hess were already at the library waiting for us to meet up and get photos as well, so we had a solid crew to roll with as we skated. Fedderson made short work of getting a sequence and then continued to just shralp around while everybody else did their thing. Eric almost got a trick down the six-block as well, but the security thwarted any more attempts and told us it was fine if we skated there as long as “our wheels don’t leave the ground.” By this time, Sean Hadley had joined the pack and we brainstormed a moment before choosing to head southbound towards Murray. When we got to the next spot there were a few tikes playing basketball so we grabbed a basketball out of the trunk and Kendall, Eric, Kevin and myself played a little two on two to pass the time before Erik Jensen, Quaimin “Panda” Pauley and Sean showed up. With our legs nice and limber from the basketball game, E.J. pulled out the camera, and we all had a merry old time. Some of us got some tricks, some of us didn’t, but what mattered more than anything was that we were all having a great time. It was quite hot outside and everybody was beginning to get a little parched, but luckily there was a fair going on at the park so we were able to get some mini water bottles from the Costco tent. Kendall ended up breaking the filmer board on a massive melon grab and you could tell the session was coming to a close. Chris landed his trick and then we were off, each heading our separate paths that would all cross over again within the night or the next few days. It was probably one of the best sessions I think I have ever had, getting to really know another skateboarder and spend a whole day skating everything from park to city to street with them.

Be on the lookout for Kevin, he had a spot locked in for the Dew Tour qualifiers in Boston, was interviewed NBC for his appearance/ performance there, already made qualifying finals for Volcom’s Wild in the Parks series and plans to be entered into some other great comps too. Those are just national comps, that doesn’t even count the local comps that he will most likely place in. I can only begin to try to explain his style and aura he projects from his skateboarding with one verse of Gangstarr’s song “Above the Clouds.” “Above the crowds, above the clouds, with the sounds of original, infinite skills create miracles, warrior spiritual, above the clouds, reigning/raining down, holding it down.”

Peep his profile on the Salty Peaks website under the team section, and keep an eye out for him at Sandy Park—he’s the one landing the tricks that you only thought existed in video games.