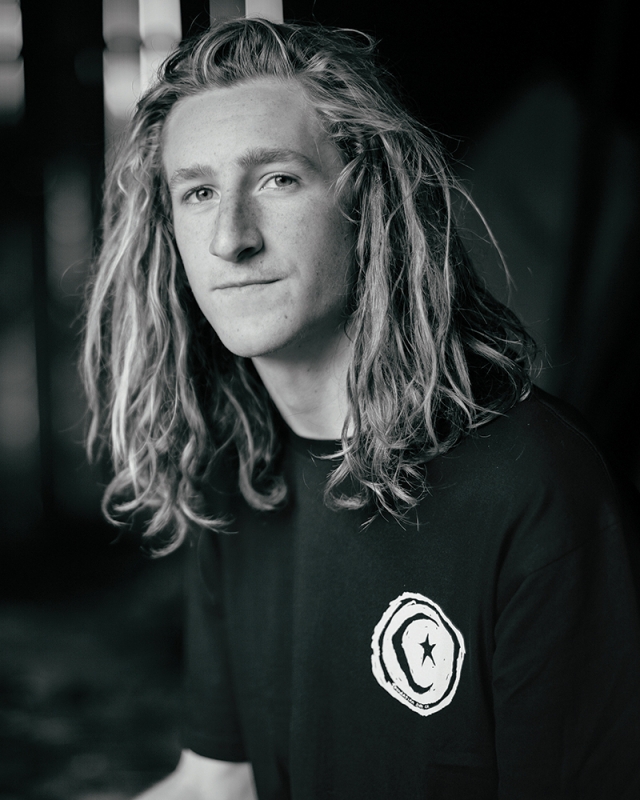 There’s no false humility in the attitude of Aiden Chamberlain—the dude is very down to earth.
Photo: WestonColton.com

It happened that I skated with Aiden Chamberlain once before at a spot with rails set against a white-brick building. We skated those for a while until someone decided that we’d check out a hulking rail that was just across the street. Only two of the group of about eight had the guts to huck themselves down the green, daunting monster. One of those kids was Mr. Chamberlain. We all stood in awe as Chamberlain stuck a backside boardslide in under five tries. Since then, Chamberlain Chamberlain has dropped a part well worth serious attention. Just before I interviewed Chamberlain, I watched his part from the video, Shit House, and I could hardly believe that he was only 16 years old. When I stopped reeling from getting hit in the head by the torrent of hammers, SLUG was able to sit down and chat with him on top of a quarter pipe in the Crossroads park.

SLUG: How long have you been skateboarding, and what got you into skateboarding?
Chamberlain: About six years. My dad skated when he was younger, and I played Tony Hawk, and I thought it was cool—like watching the skate videos.
SLUG: Who was your favorite skater in Tony Hawk, and which Tony Hawk was it?
Chamberlain: I liked Chad Muska. I used him a lot—and it was Project 8.
SLUG: How long have you been riding for Crossroads, and how did you get on board?

Chamberlain: Like, three years now. This guy, Josh, the old manager here—I gave him a video and he just put me on the team.

SLUG: What was it like growing up skating North Ogden Park?
Chamberlain: It was weird, I guess. You have to learn how to skate ledges.
SLUG: What kind of terrain do you like skating the most?
Chamberlain: Rails, bump-over gaps.
SLUG: What were some of the street spots you skated as a kid?
Chamberlain: I’d skate a little six-stair at a Smith’s in North Ogden. There’s a bunch of spots around there, like little manual pads and four-stairs and stuff like that.
SLUG: What kind of videos did you watch as a kid?
Chamberlain: Emerica videos, Foundation videos, Toy Machine videos, Zero videos.
SLUG: Which Emerica videos? How far does it go back?
Chamberlain: Stay Gold came out when I was pretty new into skateboarding, and I’d watch that. WTF—the Foundation video—I’d watch that a bunch. I like local videos a lot, like Call it Venting.
SLUG: What are some of the other local videos you like?
Chamberlain: Four Down, the Sk801 video. Touch It 2, Ham’s video [that] he made a long time ago.
SLUG: What’s your favorite video part of all time?
Chamberlain: Mark Suture, Cross Continental.
SLUG: Who made that video?
Chamberlain: I’m not sure. Some filmer in San Francisco or something. It was just on YouTube. I think Thrasher posted it.
SLUG: Who’s your favorite skateboarder of all time, and what do you like about his skating?
Chamberlain: Taylor Smith. He skates super-tall stuff—he makes it look easy, and he has a way good style.
SLUG: What kind of spots have you been skating?
Chamberlain: Buildup spots—we’ve been trying to find those: where you pull the grates out of trees and put your board under them—and just rails and bump-gaps.
SLUG: What do you do on the trees—like, wallies?
Chamberlain: The grates that go on the trees: Pick ’em up, put a board under it, and it’s a little kicker. Sometimes, there’s planters after it, or something you can gap over.
SLUG: Oh, like grates where the tree’s in the center?
Chamberlain: Yeah.
SLUG: Have you ever caught up on the grating?
Chamberlain: I’ve seen it happen.
SLUG: What’s your favorite spot in downtown SLC?
Chamberlain: I like one of the buildup spots … There’s one of those up to a ledge. That spot’s super cool. It’s by the two-story Harmons.