SLUG Mag Soundwaves
Episode #395 – Cotes
00:00 / 18:06
Spotify Stitcher
RSS Feed
Share
Link
Embed
John Scott Willardsen is a name not often heard within the Salt Lake skate scene. The name Bambi, on the other hand, comes with a well rounded resume of infamous antics, well known among the fellow followers of the sidewalk surf break. From endless days of cruising around with Bambi, I know he is a skateboarder, wholeheartedly.

Bambi: The Youngest of the Young Guns 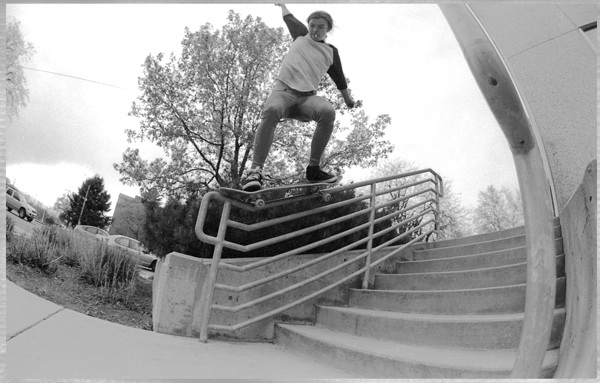 John Scott Willardsen is a name not often heard within the Salt Lake skate scene. The name Bambi, on the other hand, comes with a well rounded resume of infamous antics, well known among the fellow followers of the sidewalk surf break.

From endless days of cruising around with Bambi, I know he is a skateboarder, wholeheartedly. Bambi is constantly consumed with thoughts of shredding the pants off of anything in a neverending pursuit of gnar. He is a motivated soul and all-around shredder, loving every second of board-addled bliss.

At 19, he’s currently riding for the Layton Blindside shop, living mostly away from his home in Layton by staying on the floors and couches of friends in Salt Lake. Physically, he looks like a skinny-ass hotdog, but don’t be fooled—he’s got heart and passion for the board that could kick the ass of any bouncer in the state rocking a dick-target beard. I’m backing that statement fully. Enough from me, let’s get some info straight from the deer’s mouth.

SLUG: What have you been skating lately?
Bambi: I’ve been trying to throw myself down rails and it’s been working about 50 percent   of the time.

SLUG: Who do you usually skate with?
Bambi: Besides you, I skateboard with Ballsac, Cameron Starke, Kallan Campbell, Burke Nixon, Mariano Wilson and that gay fish,Yo Mikey.

SLUG: Have you or any of those dudes been getting some wild hammers recently?
Bambi: Fucking doing our best, it sucks. I mean, getting hurt all the time sucks.

SLUG: Besides skate hammers, let’s talk about life hammers. Been dropping any of those these days?
Bambi: Life hammers, huh? Doing my best to skateboard all the time, get drunk and surround myself with my friends and beautiful women.

SLUG: What keeps you skating?
Bambi: I don’t know, it sucks. Eating shit on a constant basis sucks, but it’s all worth it because it’s fun and the best thing to do, all the time. I love it.

SLUG: What are your major inspirations?
Bambi: Definitely when I was a little guy watching Shotgun, the Layton Blindside video. I watched that all the time. After that, I watched Slaughterhouse, the Pig Wood video. That was the biggest inspiration that changed me for the better.

SLUG: Are you filming for any videos right now?
Bambi: Yes, I’m filming for Acid Bong, which is Cameron Starke’s video. Omar Budge, Cameron Starke, myself, Mikey Johnson and Mariano are sharing a part, and then Ballsac and Bird will also have full parts. There will be other people in the video. For the most part, it’s just the guys I mentioned.

SLUG: Locally, what other skateboarders get you psyched?
Bambi: Number One right now would be J.B. aka Mariano Wilson aka Jabbles or whatever else you hear people call him. That dude fucking kills it. He’s the gnarliest skateboarder I know. Ballsac falls in there. He’ll throw any trick down any spot and land it, too. So proud of you, Ball. And then, Yo Mikey. He’s kind of a gay fish. But, he’s good at skateboarding. Oh, and those two little twins, Cameron Parkinson and Carson Parkinson. They grew up in Layton with me. They’re a bunch of little bitches, but they are killing it on skateboards.

SLUG: So, theoretically, if you had an infinite amount of money, what would you do with it?
Bambi: I would probably buy a house here in good old Salt Lake and one in Vegas. These are mansions, not houses. One in New York. Then me and my friends would always travel from here to there and stay wherever we wanted, and let everyone live there for free, as long as you’re not a kook. The world would be a lot funner place if I had infinite money.

It’s good to see that skate rats are still thriving on the streets of Salt Lake City. Keep shredding my friend. Acid Bong will be released later this year, official premiere date TBA.