On Saturday July 14, we escaped deep into the heart of Ogden to chill out at Crossroads Skatepark for the first Summer of Death skate series contest. Typically, a hot warehouse full of groms and sweaty old men is not a place you want to be when the temps are soaring past the hotter-than-hell marker on your thermometer. Fortunately, the locale worked out perfectly since, for the first time in months, the water molecules in the clouds finally decided to band together and pay us a visit. 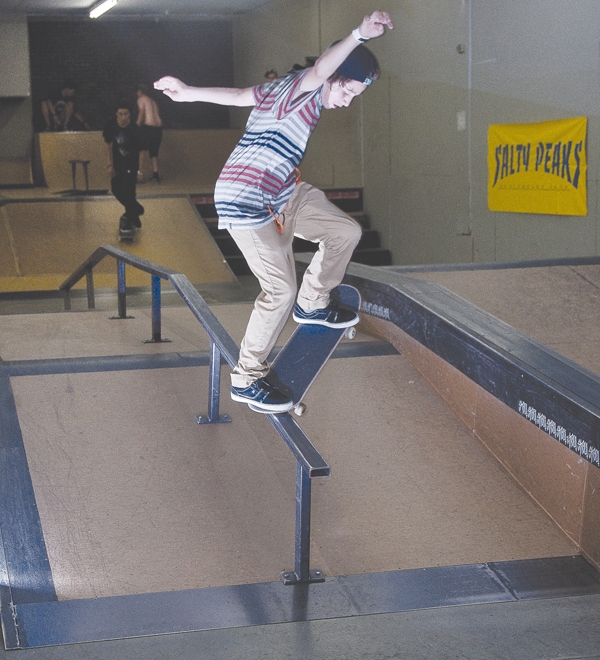 This summer, Utah has been on fire! No, literally, it’s engulfed in flames! Thanks to an exceptionally dry winter, most of the brush is ablaze. Luckily, there are a few things to do while the city burns that will cool that sweat on your brow. You can crash a pool party, find a fresh breeze in the hills, drink a few cold ones and forget where you are, or hang out with the coolest crowd you know, SLUG. On Saturday July 14, that’s what about 40 other kids and I did––we escaped deep into the heart of Ogden to chill out at Crossroads Skatepark for the first Summer of Death skate series contest. Typically, a hot warehouse full of groms and sweaty old men is not a place you want to be when the temps are soaring past the hotter-than-hell marker on your thermometer. Fortunately, the locale worked out perfectly since, for the first time in months, the water molecules in the clouds finally decided to band together and pay us a visit.

The layout of the skatepark inside Crossroads looks a little something like this: a quarter pipe and roller into a tight fly box with ledge and rail, into a raised deck with a hip, flat bar, small quarter pipe into a four-set stair option. Off the hipped pyramid is another curved QP with wall ride adjacent to the mini ramp. Behind the mini is the micro. Needless to say, there are a lot of features packed into a small area. Being limited in space led the contest to be formatted into two divisions: 17 and under and Open. Each division got a 30 (or so) minute jam. Judges scored the Top Five based on difficulty and overall impression, and the finalists battled for the podium. In addition to the Top Three spots, SLUG’s Mike Brown was on the course getting in everyone’s way and paying the kids for tricks (not turning them, for once). With the rules and regulations established, Eric Hess and Billy Ditzig, the masters of ceremony, announced the start of the first heat.

With 30 minutes on the clock, 15 wild tweens raced around the course in order to win the hearts of judges, Jared Smith and Tyson Mussleman. Despite the overcrowding and potential fire hazard, the kids dodged each other remarkably well and put down some serious bangers.  With a lack of identifiers on the skaters, it took a good while before the judges could figure out who was who. Once it was sorted out, the Top Five began to emerge. Dylan Bruns, Tanner Oliver, Jorge Martinez, Carson Parkinson and Remy Gerard advanced into finals. Reset the timer, clear the course and let God sort ‘em out!

Even the man upstairs had no idea how much talent these kids had. For the next half hour, we watched in awe as these skaters laid it all on the line with hopes of being crowned king. The flat bar and four-stair, once again, became the obstacles of choice, and mastering both would be the only way to set you apart from the competition.  Bruns made his case with smooth back lips, and a kickflip front-board on the flat bar. Parkinson stomped a front-board big spinout and added a lip slide front shove-it out at the buzzer, but no one could touch Oliver. With a switch-front three down the stairs, a big flip over the hip and a crooked down the fly box rail, Oliver quickly established himself as a judge favorite. He officially sealed the deal when he began to take requests from MC Hess, landing each one within a few attempts. By utilizing all the features, Oliver took home the win and a large bag of goodies from the sponsors, followed by Bruns in second and Parkinson in third.

With the heat returning and humidity rising, it was time for the vets. Same format as before: the Top Five going on to the final, Top Three taking home hardware (or woodcraft, in this case). After a long deliberation, the final shaped up with the two Tylers (Melton and Olsen) advancing along with the crowd pleaser, Lt. Dan, Land Olsen and Aiden Chamberlain. Like the young bucks before, the Top Three in this division began to separate themselves quickly. Despite being shirtless, Lt. won some laughs, but just couldn’t compete with the flip trickery of the other competitors. Neither could Land (although his throwback tricks brought on a ton of cheers). Chamberlain, who suffered a potential broken toe in the semis, showed grit as he fought to keep up with the Tylers. By landing a 360 kickflip over the hip, along with a kickflip lip on the flatty, Chamberlain found himself hobbling onto third.  In the end, only one Tyler would garner bragging rights. Melton started off solid with a nollie 360 kickflip and kickflip board slide, but cooled off until the final moments, when he pulled off a Benihana late shove-it over the hip, earning second place honors. Olsen heated up as the clock waned and just barely pulled off the win by landing a tre flip lip slide and full cab kickflip, to name a few.

To wrap it all up, a mini ramp session went down for a best trick award. Levi Faust single-handedly destroyed the park and was handed the trophy for his huge front side airs on the extension. In honesty, any one of the tricks he did on the mini would have
won something.

Be sure to check out the next chapter in the Summer of Death series: Rough Side on Sept. 8 (like facebook.com/SummerOfDeath for details). Thanks to all the sponsors: Blindside, Crossroads, Milosport, Saga, Salty Peaks and SK801. Thanks to all skaters and spectators for coming out. Remember to support your local shops and stay cool in this summer heat with SLUG Mag!