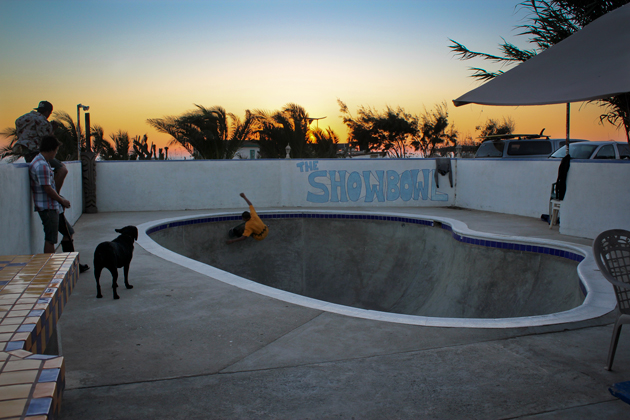 April 13th
Amador, sitting between myself and the window seat, has just come from the Phoenix Am, where SLC’s own Adam Dyet swept the show walking away with a 1st place and Best Trick (nollie cab heel 270 to switch f/s board down the big rail.) Lizard managed to finagle a small portion of the prize money with a burly gap to car to roll in. While in AZ, Dave bumped into, original Z-Boy, Aaron Scott, out on his new Z-flex campaign. Aaron is a long time friend of mine and also happens to be one of the key coordinators behind this Mexican caravan towards the sickest secret pool south of the border, Showbowl of Cuatro Casas, Mexico.

April 14th
Jersey picked us up from the airport but we couldn’t convince Dyet, Lizard or Mark White (all staying only a few houses away in Ocean Beach)- they missed one of the best possible photo-ops those up-and-comers could ask for, although they probably did better for themselves by, sticking with Rhino and staying out of the dark, drunken, perverse world that Cuatros represents. So, I and the posse headed south and the drive was crazy. Drinking since Tijuana we soon hit our first obstacle, sanitary checkpoint. I panic to stash my beer as Steve (in front of us) is waved through. “Carrying fruits or vegetables?” The man asks. “Um…yes,” I reply. My friends all look at me like I’m retarded. I look back at the man and he’s glaring. He simply told us to burn the orange peels and apple cores, though, and we were through. No sweat.

I’m cracking into another as we suddenly approach another check point. This time it’s Federales holding machine guns. Jersey snatches my beer and passes it on to Dave who throws it below the seat along with his and Paz’s. My heart pounding, Dave’s beer spilling under the seat, I’m waved through just after Steve. Wow!

We pickup speed as we finally reach the last road, dirt and filled with fleeing jack rabbits and field mice. We’re all high with hopes when we see the Ocean and the beached skiff on the side of the road. Soon we’re gazing over the hostel coutyard at the reason we made this mission.

April 15th
So far we are the only out-of-towners to have shown. We set up our camp with shade and beach chairs and sessioned the pool a bit. We cheer as Aaron’s big blue truck pulls up into the middle of our horseshoe game. I call him a fucker and and laugh as he and Allysa climb out of the truck. Following Aaron in was Jimmy the Greek with Heidi, and Matt Kriegle and Shannon rolled to catch the tail of day one.

April 16th
As the second day of sessioning begins, all sorts of people roll in and I’m seeing cats I haven’t seen since the last time I skated The Bridge. It’s all the boys that built the place. Cracking PBR’s and dropping in. As I realize, it’s only 7:50 in the morning, I opt for a little cowboy coffee with a chorizo and egg breakfast burrito.

Throughout the stay you would hear outbursts of screaming and boards clacking against the tile lip of the pool. That’s when you knew somebody was wrecking shop! It was the Whitedog this time so I busted out the camera to try and catch this f/s D-slide around the tight ass corner and into the steep ass shallow end of the pool but couldn’t capture it before he ripped his hand open and stepped away from the session.

April 17th
Day three was when “All Time Cuatros” was realized, as people migrated fluently between the Ocean, the camp and the pool. Richard, the man running the hostel, was in the water showing the kids his old school steez! The man can surf!

The Greek and his lady Heidi get into a heated session in the pool. Erin hopped in and threw a few frontside slasher grinds in the deep end. Aaron? Stand up frontside 5-0’s (with authority). Whitedog can’t resist the temptation of a feeble to fakie over the death box to show the ladies his idea of a good time. The Greek decides to tear the thing up like a billie goat on a tin can and does.

A.S., Ellis, Russto, Kriegs all out in the water feeling a little familiar with these picture perfect sets rolling and breaking on the beach;the beer drinkers, ranting and raving about whether or not a leaner counts as two or one point as the next hurl hits a ringer, making us scream louder than best trick. Like I said: All Time Cuatros.

April 18th
Despite the carloads of people that pulled out of Cuatros before nightfall last night, we managed to party quite toughly. It wasn’t until late that I realized my flight was at 1:05 p.m. and not three something. I awoke in a panic at 6:00 and began trying to wake the others. Easier said than done. Not until 7:40 did we hit the road, still contemplating “twisting one.”

I drove like hell through windy mountain passes around farmers and 18 wheelers, knowing there were no narcotics aboard and still only hit the boarder by 10:50. We broke through customs at about 12:20 and made a 20 minute rush to the airport. There was no time to even check my bags as I speed walked down the terminal and to the gate. Now I’m sitting, lodged between two business class that pretend not to mind my reeking of campfire and sweat. How considerate.