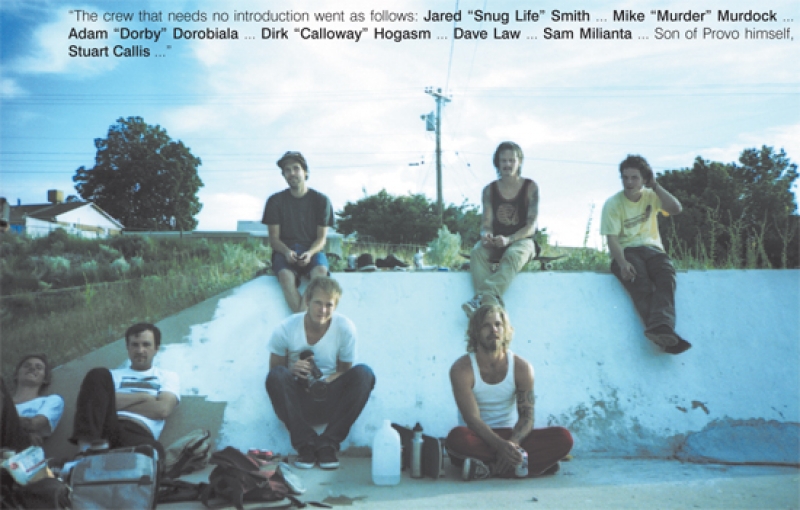 I am he who is feared. I am the one they call the beast. I am a prophet. I am the purveyor of perversity. As clear as the horizon at dusk, as loaded as your papa’s pistol. I have come for your sins, you suffering masses. Follow me into the abyss. Dance with me in a moonlit twilight. Burn your boot maker’s clock. Prepare for reckless abandon in route for redemption. I am the pied piper of souls seeking freedom from the known, and searching for truth amongst the trivial tabloids. With the end of an epoch close at hand, I chose a few of my favorite magicians to accompany me on a most grand journey into the fabled land of “Provo.”

Liberty Park is a meeting spot of kings. Current Sexy in Salt Lake winner Chris “Swangst” was the first dog chillin’, mixin’ it up with the “hottie boobalotties” walkin’ by. It was rad everyone showed up solo, literally one by one, solidifying the fact that I had assembled a good crew of lone entities of self-propelled destruction. The wolf pack was manifest in us menaces of rolling thunder. The sound of a crew rolling across the land is soulful insanity. The crew that needs no introduction went as follows: Jared “Snug Life” Smith riding a whale of a board, probably a 9.18 total slash madness board I am completely envious of (“it don’t matter”). Mike “Murder” Murdock comin’ correct with hat and cutoffs (“consider it perverted”) Mike’s my man. Adam “Dorby” Dorobiala, constantly flowing mental energy (“I just chewed on it then spit it out”). Dirk “Calloway” Hogasm (“comedy’s too easy”) cheery, lanky and funny. Smith’s so sick on the wave bar (“it’s like plaque on yer teeth, only on yer dick”). Dave Law, I just met this guy. He had a cut on his heel as a result of karma. He couldn’t skate much, but kept that god damned VX 2012 rolling the entire time. Sam Milianta, a photo head, laid back traveler. No quote, but I did hear him coin the term “shmegmatic” if my ears don’t deceive me. Finally, son of Provo himself, Stuart Callis (“don’t incriminate me”). Stew’s the most underrated ripper around, a true guru in the realm of skate kung fu artistry.

The trip began, not before stopping at a local beer vendor for a couple cases of Mexican corn beer. “You just sweat that Mexi beer right out,” Snug Life said. God’s country is dry on Sundays. Back to the river of pavement, at a cruising speed of 75 in a VW Rabbit, we sailed past meaningless billboards, businesses, and subdivisions. I began to feel this relative reality slip away, along with time, fear, responsibilities, ownership and everything else that keeps our people weak. Slipping from man-made delusion is key before eating psychedelics. Otherwise, holding the façade will lead to paranoia and confusion. The Orem Ledge Utopia is still a perfect spot. Dark clouds mixed with sun and a gentle breeze swept the air as a pow-wow ensued on the grass in cross-legged style. The bag was passed to unnamed participants in psychedelic experimentation. The fungus fumigated our souls’ lost byways, breathing life into all bitter cavities. The day’s awakening began and the chant “mushroom power” beckoned Oremians from their drollery. Murder was back blunting the elevator ledge skyward, and popping out in laxity. Stew locked in effortless tail slides on the buttered concrete.

With southern winds strengthening at our backs, session energies shifted and uncontrollable bursts of energy set the tone for a 90s style barrel jump. “The board’s only as heavy as you think it is,” I confirmed with a nollie blast over said obstacle. Stew heel flipped it goofy and regs, Swangst and Murder bonked, Snug Life flipped,  sweat dripped and we were on the road again. On the way to the car I was shredding the sidewalk to the point of losing all control and faced the first “pitch to flat” of the day. Knee, elbow, and shoulder were a bloody mess. Skating is a primal passion of men. Howling, grunts, jawing and basic war cries are our conversation. Jokes, taunts, and jeers replace words to describe the unexplainable. We waste no energy on complicated communication. This style of behavior continues as we cram into the Rabbit, and roll out again.

The sublime deadness that Provo has to offer on the day of our Lord is surreal. We reveled in the conquest of skaters. (Ledge Utopia was knobbed at one point.) Try as they might to keep us down, we will de-knob, destroy, de-throne, and live to skate another spot. We drove east toward flat-top mountains, visions of a world gone mad came in through the windows and unfiltered brain passageways. Main Street in Orem is dubbed one of the ugliest roads in America. It was a joy to behold with such clarity and disgust, as the exhaust of heathens filled our lungs. Surreal beauty returned as we climbed into the green suburban backroads of Provo.

We entered a grocery store parking lot and my breath was taken away. This was the spot of my wet dreams. A picturesque asphalt wave with weathered to perfection coping bar running the length of it. Pupils dilated in wide-eyed delirium, the wolf pack was released on the black landscape. An elderly chudd had to wipe the disbelief off his warted face while watching such a brood attack his quiet hood.  Meanwhile, hospitality was a plenty in Provo, Stew’s buddy Skylar was there sweepin’ up the pebbles for us, primed, pimped and ready for carnage. Hogasm christened the sesh with a second try smith on the wave bar. Snug Life front board pop backed into the bank right off the bat and energy was surging. I back 50’d it while Murder was back smithin’ and front 50-50 over the knuckle. I love spots you gotta push like a mother fucker into. Sit back, wait for the energy to peak, throw down, get your tunnel vision going and all that matters is the rush you get while rolling away.

Snug Life front blunted in, and Hogasm got “pitched to flat” trying a front feeble, bloody finger tips duct taped back together. Shortly after Murder fell victim to the third “pitch to flat” of the day. “It’s all happening right now,” that’s the wake up call of a good bell ringing. Dorby was drifting in and out of my consciousness as he was throwin’ hippity hop 180s over in and down. Snug Life back tailed the rail on his pirate plank, and Stew shut the session down with a high speed crook fakie capped with a fuckin’ flawless half cab flip on flat while haulin’ ass on the good earth. “You just think of a trick and you can do it,” Stew was feelin’ the flippity. It was all mind over matter at this point.

We rolled east again, up to the foot of the mountain. A place we could pop more caps and peak in peace. Swangst fresh out of the car, drops in on the ditch we’re about to scalp, instant “pitch to flat,” “not so sexy in Provo,” Snug Life said. The spot was as follows: rugged steep banks with minimal cheese wedge tranny installed by locals. I, along with other over-heated cohorts, chose to sit this one out in the shady crevice at flat bottom. The clouds began to form into Hindu goddesses as the moon slumbered in the blue sky.  At times I would look up at the magician set to drop in above me, physical body silhouetted against crystallizing clouds. I saw a drive and passion not easily recognized.

We watched in splendor as our friends demonstrated the art of illusion on this impossibly difficult skate spot. Stew set the mood with an eastern style kickflip. Snug Life was crailing the lip and tempting gravity with ollies and late shuvs above the rim. However, he and Stew got another taste of the cold concrete at a true place of the menacing “pitch to flat.” Dorby honed his craft with abstraction as he 360’d and shuvited any way he willed. Murder stomped a f/s flip, as Hogasm chose to ollie in. The good times ended and skateboarding evolved into stone throwing. I won’t go into details, but there is definitely unchecked aggression amongst us. Needless to say, it was a squeelin’ rubber exit.

The sun sank into the horizon while we sat on railroad tracks above the rushing
Provo river. “I haven’t had that much fun since I was 14,” Snug Life said. “Not until you become as children can you enter the kingdom of heaven,” Jesus Christ said. It’s funny how a fungus that grows in cow shit is the quickest way to enlightenment. We are devils. I am the Antichrist in eyes of modern men, yet we spent the day in heaven––a dimension that is feared and sheltered away. A place that is pure and perfect in every way. Thank you my brothers for walking into the fire with me, we are stronger now. Goodnight.