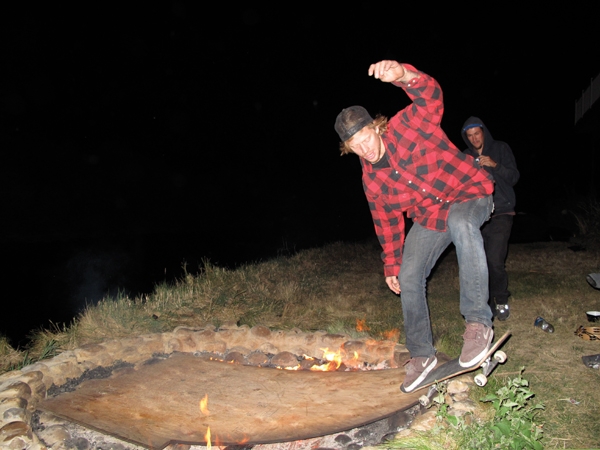 Labor Day is the official mark of summer’s end. Naturally, this meant an epic gypsy skate adventure needed to ensue. Everyone convened at Jared Smith’s house. Our gypsy caravan included Kendal Johnson, Willy Nevins, Rob Peterson, Tully Flynn, Isaiah Beh, Sean Hadley, Nephi Beh and Tyler Zwan. Also, not to forget the guard dogs Gonzo, Koi, and Lucy––no gypsy caravan is complete without dogs.  It was Sunday afternoon, the destination was Oakley Skatepark for an all-day skate session and the hunt for a free campsite afterward.

The day was perfect: a mellow cool breeze kept the temp down, puffy white clouds filled the sky with no dark ominous ones in sight. Looking for the same journey we were, some fellow skate locals and a few other SLC rippers greeted us upon arrival. Everyone scattered in their own direction, feeling out the new terrain. Hadley was speeding into everything, laying down massive crail slides over the loveseat, huge fly-out airs up to a ledge and an onslaught of tricks on the down rail: front blunt shuv, front blunt bigspin, and front feeble fakie, to name a few. Nevins surfed it ratchild style, while Isaiah Beh caught it all on tape. The session shredded into power hour when the light turned gold just before the sun dropped behind the horizon. It was time to venture out and find a home for the night. Peterson had a trick up his sleeve for a spot we could poach for the night. Little did we know how perfect it was going to be.

We pulled off the highway onto a dirt road. Kicking up dust, I drifted around tight corners, passed by a farmhouse and a dirt motocross track as we pulled up to a massive red ranch. Behind the ranch was a picturesque campsite of perfection. Perched on the banks of a surging river, the ground was evenly leveled, covered in soft yellow grass and free of hard rocks and thorny weeds. Everyone plotted out a spot to set up a home for the night. An old dilapidated mini ramp lay near by––unskateable and overgrown with bushes, it would be partially sacrificed as we danced and howled around a blazing inferno late into the night. The sun dropped swiftly and darkness followed. We used the fire to prep a feast of gypsy foil dinners and chili cheese dogs for all to gorge until our bellies were plump and bloated with goodness. Zwan pounded away a beat on his hand drum that evoked a tribal beast in each of us. Nephi Beh followed suit with his guitar while Nevins and Isaiah Beh enchanted our ears with a flute and tambourine. This was pure gypsy divinity. We raged into the night with the dogs at our sides, keeping good guard of the territory. Lucy temporarily got lost in an animalistic dementia as she ran in circles bellowing a thunderous bark into the air and diving blindly into the black water of the rushing river. With each jump, only a splash was heard and only two glowing red eyes could be seen drifting with the water.

Embracing our own animalistic dementia, we piled on mounds of wood blazing six-and-seven-foot flames into the sky. A plank was laid across the pit and a fire-walk took over only to expand into a fire-skate. Flynn tossed a full sheet of plywood he had dragged over from the ramp onto the fire. Hadley immediately grabbed his board and began to skate on top of the flaming sheet. Flames spat out the sides as he cracked small ollies and shuv-its. Rocking back and forth as the board bowed to the ashes, Hadley slipped out, falling to his back on the board. The fire gods were generous as Hadley stood without a single singe. His board ejected behind him, landing in the river. Isaiah moved with a ninja-like swiftness, climbing quickly into the water to retrieve Hadley’s board. We celebrated the retrieval and concluded the outrageous fire skate spectacle with another feast of fire-grilled chili cheese dogs. We wallowed in gluttony, consuming everything we desired. For the night, this was our kingdom, this was our land. We lived like kings: damn hell-ass kings.