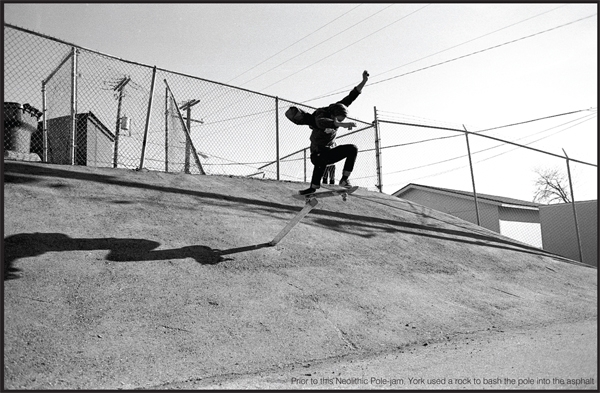 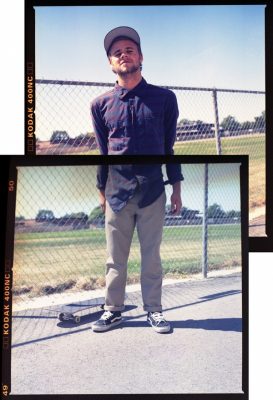 Devin York is a bit of an anomaly. He was a child prodigy who could salad grind handrails at the age of 13. He grinded a double-kink that most pros wouldn’t touch (and some pros have looked at this rail) during his sophomore year of high school. Yet in this day and age of Shecklers and Hustons, York never quite received the “extreme” sponsorship he deserved.

Maybe it was because he didn’t do enough fly-outs at the local Orem skatepark. Maybe he didn’t wear a helmet when he destroyed gaps and rails. Maybe he wasn’t cool to all the people who could’ve forwarded his career (i.e. he didn’t kiss the right ass). Or maybe he was just too gnarly and original to be considered “marketable.”

The truth is, York thought outside the “skateboarding box” a little too much, and he lived in Utah County. Both of these things contributed to the fact that York killed everything put in front of him for years and still remained relatively obscure.

These days, York isn’t just a rail chomper. He’s a bonafide all-terrain shredder. He’ll get all ANTI HERO in the bowl, roll out, half-cab crook a ledge, impossible a gap, then slappy a curb on his way to the parking lot. He’ll skate any spot you put in front of him, not worrying about what’s already been done there. If it’s a “famous” spot, he’ll just skate it in a way you never even thought of.

Skateboarding needs more Yorks and less Shecklers. If it wasn’t for people like York we’d all be getting corporate sponsors and wearing team jerseys. Without people like York, skateboarding might turn into (choke) a team sport. So, if you meet York and he comes across as being kind of dick to you, you should thank him. He’s just keeping skateboarding raw, like it’s supposed to be.