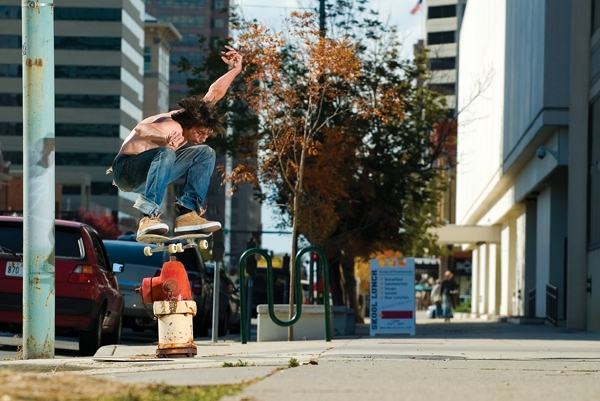 The unholy sacrifice. The baptism in goats blood. The inquiry into hedonism. Forget your quandaries and play in the glow of eternal darkness. The horned goat man beckons, at cloven hoof thee must bow. Turn your back on the bearded white god. Wear the black shroud of mysticism. Nail the eviction notice to the temple door. Deny rapture and fall into the basement, my cloaked brethren. Bang the gong of godlessness and laugh away the sighs of prudes. Gesture with one sweeping arm motion. Sell the story with sadistic mortification. I am the newfound product of the beast, hear me roar.

Excuse my indulgence, as you must realize it is a special occasion. This November, “fall” to be vague, marks the 15-year anniversary of myself selling my soul to the devil. There is no place for god in skateboarding. We are Satanic, anti-social misfits by nature. We hate everything, especially social structures. The wasteland of pavement and cement are more or less glorified playgrounds and we do not understand why people are so fucking stupid that they don’t see this simple truth as well. I bought my first skateboard 15 long years ago. I progressed slowly without the aid of cement facilities or social support. No matter, I rode the bus route 8 on epic adventures the boys and me coined as DTX: down town motherfuckin’ extravaganza. I still rejoice in this ritual. Now I get to write about it.

I live downtown, so the train will suffice. DTX always begins at the top of the U. I can’t remember how it started, but sometimes a friend feels the need to run their mouth. I am a believer that the impending apocalypse will weed out the weak, the debaters, the sick, the old, the inadaptable assholes who cling to silly superstitions. I will and do use brute force to dominate a shit talker. The “chokemate” is a simple lesson to the subordinate who unwisely decides to run his mouth the entire train ride to the top of the university. In this case it’s Swainston, silly little immigrant. I was gonna pop his head like a peanut. I bull charged his ass, put him in an uncomfortable position and slowly cut off his air supply. His pride only lasted so long and his gracious attacker accepted a tap out. After this quick domination we rolled down. Bombing is customary routine for the ritual of DTX. Back in the day we’d butt board 3rd S., shit was legit considering we were 14.

I guess things have changed, just half a bit though. Instead of being kids in a candy store boardsliding every five stair rail and grinding every red curb, now at the bottom we head for the packy shack for the best deal on Modelos in the hood. Willy found a little booty in the grass out front of Mike Brown’s place: an unopened Bud Light. Mike was busy and couldn’t come, fucker. The dogs made it over to the Masonic temple for some flat ground. I don’t give a fuck what anybody else was pullin’, I rolled a FS flip. No, no, just kidding, Stew was landing tricks too. And Jared took the s-k-a-t-e title so Dirty got all bitter and went and found a roof to jump off of. I went over to the temple and walked in. I figured I knew a couple of their secret handshakes so maybe I could join them for a bloodletting, or at very least a donut and coffee. I learned the hand shakes from drunken return missionaries—yeah, those fuckin’ masons stole Joe Smith’s secret man grasps. Remember the molester handshake you used to give your buddy to creep him out? It’s like that. They told me not to write about our bloodletting, so I’d better not— I don’t wanna fuck wit dis come up. Being a first degree Grand Wizard is my calling.

Later, we made our way down South Temple. Playing in traffic is so fun on Sundays, I don’t get why people are so uptight. I guess all that worship makes them uneasy and a Satanic skater in the road really gives them the willies. So, we’re all skating down the road, meanwhile Swainston and Dirty Hads are all riding in this stupid car, breaking the first rule of DTX: no cars! I was gonna choke that pussy ass hipster out again. Oh well, I bet he got pics seeing as how he had to haul all that flash tri pod brick a brack. Blood of a thousand rotting corpses intoxicate my blackened soul. Another lonely hill for us trespassers. I roll fakie until speed and heartbeat is fulfilled, I switch my stance with a quick twitch of my downhill facing tail. I pass a bum and spit in his ugly mug just for fun. He gives chase and as his legs give out the drunk ass face plants the sand paper cement. With face peeled back and skull partially exposed this derelict gets to his knees and quickly collapses as the thinned blood fails to fuel his brain. We all laughed, maybe Fish the loudest, a grand yo ho ho as the gang reaches the HK at the bottom.

Supercilious landlords of this megalith on 1st S. have done all they can to prevent such perversion on their brick laid plaza. Knobbed hopeless handrail and haphazard security guard. Nice attempt, but old salts like myself and crew could give a fuck less about a rail and as for the rent a cop, fuck ‘em, always nappin’ always good for a half hour hessian session.

Tricks out, tricks on and tricks into these cheese wedge brick banks. It don’t matter what tricks went down, Satanic grins abounded as childlike desires were fulfilled in man bodies. This is, of course, the best skate plaza in the city. We sinners harvested the carcass of a thousand Christian sympathizers as our vain repetition of Sunday Satanism boiled to the brim. Hardy laughs and aluminum can cheers were heard for miles as we passionately adulterized the business building’s commons. We mocked the bewildered security guard who finally showed up as we were already prepping to depart. What else to do but bomb some more and catch up with prematurely ejaculated comrades Bawbo and What’s-His-Name at the titty-less bar. I make a point to note the fact of titty-lessness because of my distaste for such a prude setting. However, I willingly abided in hopes of deals on palatable lager. Four dollar shot and stein I ordered from the barkeep and realizing I only had three ones in my pocket I turned to Jared for a dollar. He obliges and I pay the drink hag in turn. This was the beginning of a few hours spent in the house of our dark lord. We toasted to the good old days and good old bus route 8. Suicide of a thousand youthful virgins whistle in the dying trees.

As long as mystical union between man and maple exist, I will rejoice in fall love and childlike fantasies of a world not so mad.