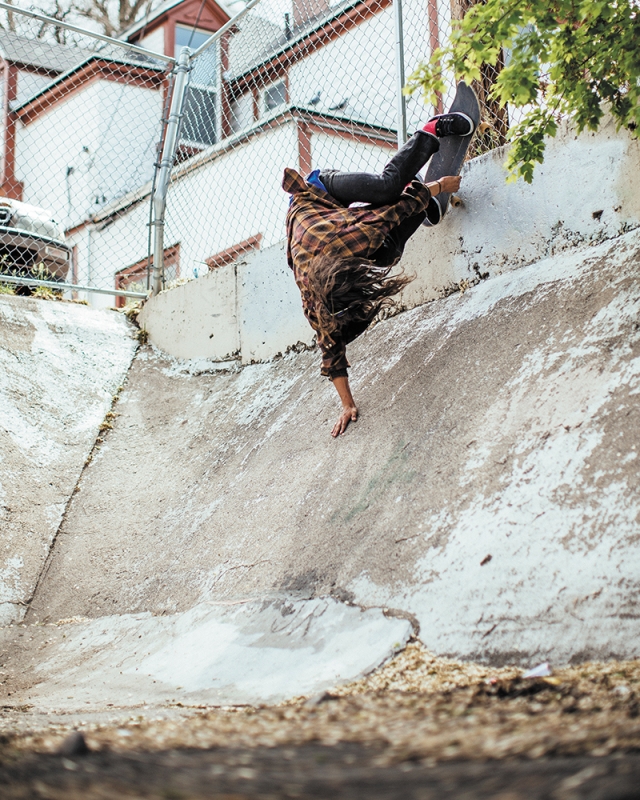 Erik Anthony: Nothing Off Limits

Photos: WestonColton.com
Erik Anthony is just about as raw as they come. The streets of Ogden aren’t kind, and he’s been handling them for years. He’s spent his entire adolescent life there, finding his feet on the board and discovering the odd world that lies within Ogden Skate Park. Now 18, Anthony is on a tear, leaving his mark all over his hometown and landing some coverage in the process. He’ll 50-50 the rail in your front yard and tail-drop the wall in the back. Neither the local church’s 10-stair nor the schoolyard’s bump-to-gap are safe when this kid’s around.
I first saw Anthony skating the Ogden Park when he was probably 11 or 12, so I’ve watched him grow from a little skate rat to, well, a bigger skate rat. With his clothes torn and board chipped, Anthony has never cared about the small things. His first experience on the board actually kept him off it, as he recalls pushing around on the neighbor’s board: “I was riding on my knees, fucking smashed my face,” he says. “[I] ran inside and told my mom to never buy me a skateboard.” Except Momma wasn’t having that—who wants a kid that rides a scooter? “She got me a board that Christmas,” he says, laughing. Anthony got his start on that fresh-ass Kryptonics board from Shopko, and he’s been hooked ever since—shout-out to his mom!
From there, it was Ogden Park sessions and the older dudes that kept him hooked on pushing wood—he first admired local legends like Omar Budge and Ryan Coleman. Anthony remembers getting stoked on Rodney Mullen back in the day, which I thought was funny. Then, he mentioned that he was a Pig Wood Slaughterhouse diehard, and it all made sense. Anthony says, “Growing up watching Slaughterhouse and all those gnarly dudes” made quite the impact on his approach to skating. Learning from a video like that would make the softest kid tough, and make him tough it did—well, that and blasting Black Sabbath and heavy rock n’ roll most of his life. Just imagine Electric Wizard starting up as he front lips a steep-ass handrail.
These days, the homies keep Anthony hyped to skate. “All my friends skate now,” he says. “It’s been the shit—always!” His friends kill it, too. Anthony rolls heavy in the streets, skating with the likes of Aiden Chamberlain, Marcus Helmer, Tanner Oliver and Remy Gerard—forming the Shithouse crew. He has the right approach to skateboarding—he just has fun with it, except his idea of fun involves pole-jamming into some chunked-concrete alleyway. Fact: Anthony rips. The rad dudes at Crossroads get the point, having put him on the team years ago—now he’s rocking that fresh new Crossroads Britney board, compliments of the shop. One a month isn’t going to be enough for him, though—someone hook the kid up! One of his favorite things to skate is a handrail, and I swear he could lock into a 50-50 on any one of them, but Anthony doesn’t stop there. Crooks, smiths, back-lips—you name ’em, he’s got ’em. He’s even got noseblunts on lock now. Though he’s got a number of moves in his pocket, Anthony doesn’t necessarily have a favorite or go-to trick. He skates by one rule: “Get smoked, sit down,” because there’s no such thing as a go-to in Anthony’s mind—just straight going for it.
When Anthony’s not hopping on handrails, he’s doing a frontside 360 shove it on that gap you’ve always looked at—take a look at his video parts. He’s had two, one in each of his Shithouse crew’s videos, Shit House and Spliff House. The former shares the same name as said crew, and his full, eight-minute part from the video, and the video itself, can be found on YouTube. Just search “Erik Anthony Shithouse”—easy as that. Those eight minutes are filled with some gnarly clips, much of them on the Ogden streets. As I’ve mentioned, those spots aren’t kind—a fat crack before the rail, a pothole in the landing, and the ground usually sucks ass. Whatever it is, Anthony can fuckin’ charge it—as you’ll see—dropping in from the top of Ogden’s infamous white walls (if interested, you can find those on 25th and Grant—good luck). That part really has it all: countless rail hammers, sketchy ditch rides, gap and stair-flip-tricking and even a few tranny tricks in there. Check that and get your hands on a copy of the more recently released Spliff House, available at Crossroads. If Anthony’s two parts, ripped clothes and who-fucking-cares attitude don’t show you the true skate rat he is, stay tuned for the next installment of the Shithouse videos, Shits ‘n’ Gigs. Anthony even mentioned that a Kyle Wilcox production is in the works, in which he will have footage.
Apart from ruling on the board throughout Ogden and the Salt Lake Valley, Anthony turns to the abundant ditches and dry weather that the Southwest has to offer when on the road with the Shithouse crew. He’s been down with the ditches lately, so naturally, Vegas is the next spot on the trip list—and you know Anthony and his boys will go to all the Sin City spots! With two videos under his belt, one or two in production, and plans for Vegas, the following months are looking pretty damn good for him—Anthony anticipates “all the antics and good times with the homies” that are sure to go down.

When all boiled down, it doesn’t matter what you put in front of Erik Anthony—he’s going to skate that shit. No crusty, six-foot run-up asphalt is going to stop him—not even a denim-shorts-wearing douchebag threatening to call the cops would put this kid off. He’s an all-out charger, plain and simple. He’s raw and he doesn’t give a fuck. Check his parts and be on the lookout for what’s to come from Anthony. He surely will not disappoint.