Mizurov has made a name for himself in Europe by competing in contests, filming video parts and supporting his sponsors. He is of Russian decent, but he calls Germany home because he has lived there most of his life. I recently had the chance to interview the European ripper and find out a little more about him. 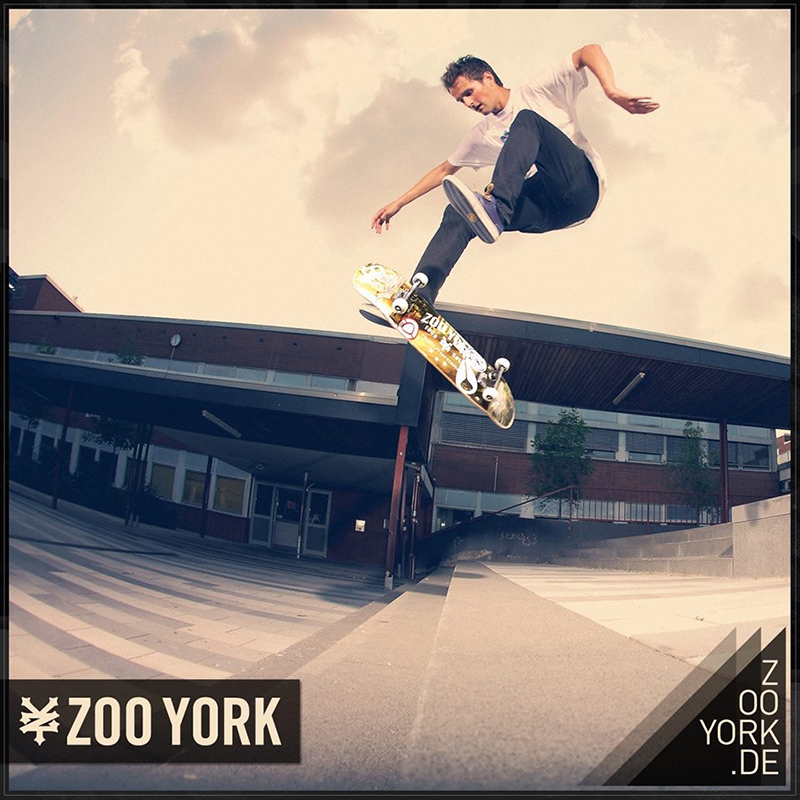 The first time I heard the name Alex Mizurov was when he beat Chris Cole in the éS Game of SKATE in 2006. He got the best of Cole by landing a switch backside 180 late-flip—that trick ended a game that included triple flips, switch ollie norths and switch lazer flips. You can enjoy that spectacle here. His tricks are mostly flip oriented onto ledges or down gaps. He has such board control that he lands bolts about 90 percent of the time. Mizurov looks as comfortable switch as he does regular stance, so you have to pay close attention when you watch him skate. Mizurov has made a name for himself in Europe by competing in contests, filming video parts and supporting his sponsors. He is of Russian decent, but he calls Germany home because he has lived there most of his life. I recently had the chance to interview the European ripper and find out a little more about him.

SLUG: Where did you grow up?
Mizurov: I lived in Astana—the capital of Kazakhstan—until I was seven, then moved to Rastatt, Germany

SLUG: What influenced you to start skateboarding?
Mizurov: A friend in school, he brought a board one day to class and I tried it out. He noticed how much I liked it and he gave it to me a week later for free—thanks Daniel! Since then I’ve never stopped.

SLUG: What was the skate scene like in your home town?
Mizurov: It used to be alright, but as we got older it felt apart. Most of my homies stopped skating … it is kind of sad.

SLUG: First sponsor?
Mizurov: My first sponsor was Titus Karlsruhe (Skateshop). I would like to thank them for all their help—they were and are still awesome!

SLUG: Who are your prominent influences, old and new?
Mizurov: P.rod (Paul Rodriguez) has always been a big influence on me. I’m digging Shane O’Neal’s style right now as well.

SLUG: How would you describe your style?
Mizurov: Technical, I guess …

SLUG: When did you first visit the States?
Mizurov: My first trip to California was for the éS Game of SKATE back in 2006. At one point I was about to move out, I had an athlete visa, but it just didn’t work out the way I wanted it. I stayed in Germany, but it wasn’t a bad decision.

SLUG: Favorite place to skate in the U.S.?
Mizurov: I haven’t been many places in the States, but I really like Portland.

SLUG: Favorite place to skate worldwide?
Mizurov: Well, there are a lot of good places all over, but Barcelona is my favorite. It’s easy to get around and there are plenty of spots to skate.

SLUG: Why did you make the change from Plan B to Zoo York? How has the transition been?
Mizurov: Plan B wasn’t trying to push me—after I filmed a whole part for them, they told me they couldn’t support me anymore, and the footage never came out … Emillion Skateboards (German board brand) was hooking me up with boards after that, which I really appreciate—they are amazing. After some time, I was racking my brain about a company that would be a good fit for me. I asked a friend to get me in contact with Zoo and it worked out well. I’m happy to be contributing to a company that is trying to progress my career.

SLUG: Loose or tight trucks?
Mizurov: Medium, I would say.

SLUG: NASCAR sticker setup or bare bones deck?
Mizurov: Hmm, too many sponsors to not have stickers on my deck.

SLUG: In what way do you express yourself other than skateboarding?
Mizurov: Chet Thomas said: “Skateboarding is my life, but it’s not the only thing in my life.” That’s my opinion too, so I don’t really like to do skateboarding 24/7. Just into a lot of different things.

SLUG: What do you hope to accomplish in your skate career in the U.S.?
Mizurov: Well, a pro model on a U.S. company is probably the biggest success I could think of!

It’s easy to forget that skateboarding happens around the world and not just at the skate park you frequent. Mizurov recently took first place at the PS Vita COS Cup, which is a European contest sponsored by Sony. I am hoping to see some more coverage from him in the future—until then, check out some other videos Mizurov is featured in.