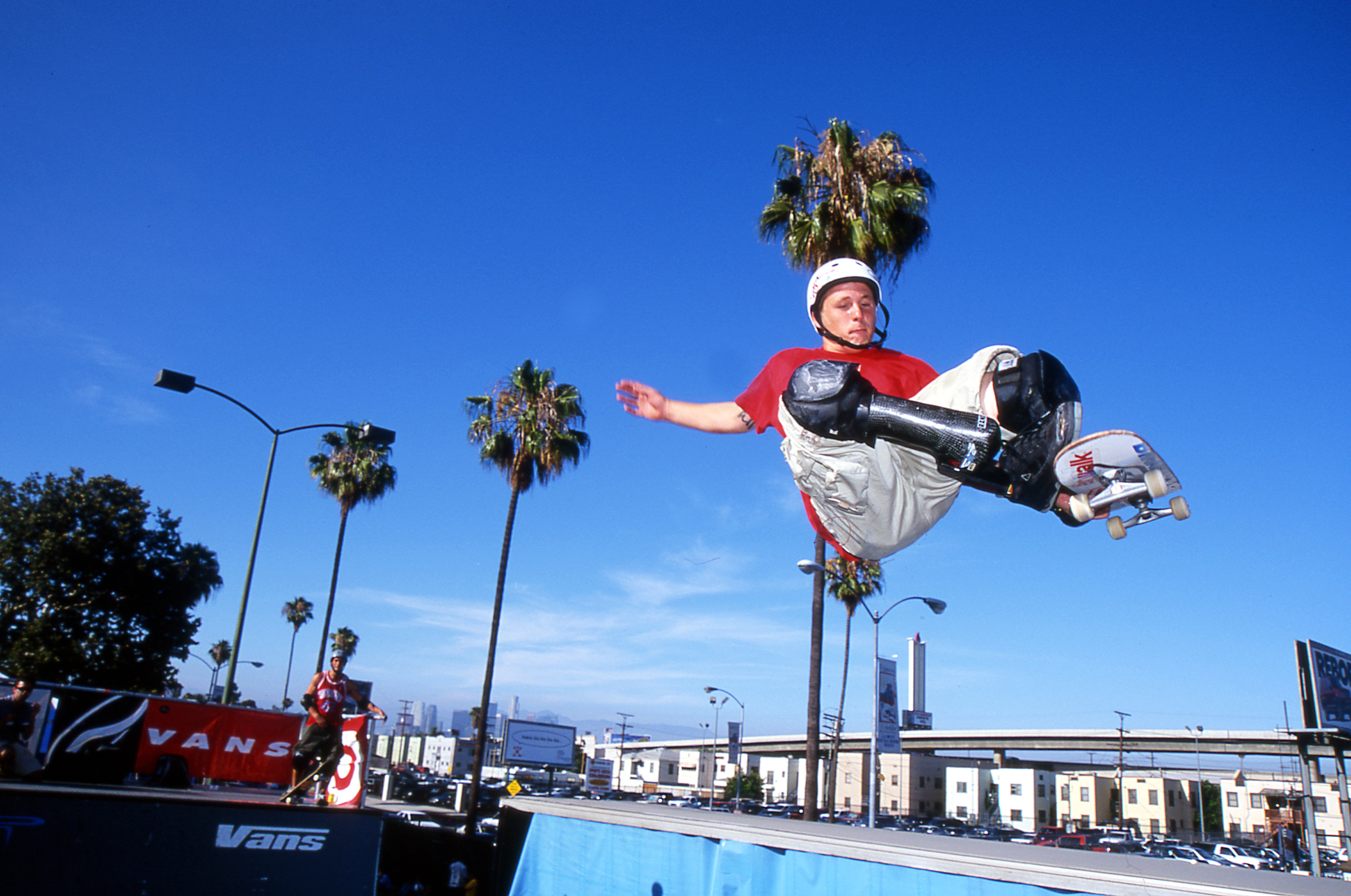 The morning of the Warped Tour, I woke up in bed being handed a nice hot cup of coffee by my girlfriend. This was pretty strange to me. I say this because more often than not, “Thanks for the coffee darling,” isn’t being uttered when I wake up, but something closer to, ” Who are you? How did I get here? Where did this street cone come from and where are my pants, dammit?”

So in uncharacteristically alert and awake form, I began my journey to the State Fairpark, where I was to be interviewing some friends of mine from Florida who were to be skating at the Warped Tour. Pretty simple right? Wrong. Upon arrival, I was notified by the press liason that none of the skaters I were to be interviewing were in town that day. At first, I was pretty bummed. But all was not lost. I did notice that Jon Comer, Texas vert legend, would be skating that day. For those of you who don’t know who he is, he has been killing it for years and to top it all off, he has been doing it with a prosthetic leg. Years ago, Jon lost his leg in a car accident. This would have stopped most people from doing something like skating, but not Jon. We were lucky enough to get to sit down and chat with him about some things and here’s how it went.

SLUG: Jon, how are you doing?

SLUG: So, you’re from the dirty South. What do you think of the dirty Mormon West? Have you had a good time at this stop?

SLUG: So most of your time is spent in Texas, then?

JC: Yeah, yeah, that’s where my house is. Dallas; grew up skating there.

SLUG: So have you ever drank on the grassy knowle?

SLUG: You should try it out some time.

JC: We always drive by the grassy knowle and out the window we’ll just be yelling fuckin’, “POW!” People just jump. It’s so funny.

SLUG: So you’re riding for Powell?

JC: I don’t ride for Powell any more. I ride for Gringo, Dakine bags; I get free shoes from Vans, thank you very much, Ripzone clothing, Bones bearings and Fast Forward skateshop.

SLUG: Answer this if you like, but what do you think of George Powell?

JC: He’s kind of weird. He’s cool. But I don’t know, he’s definitely not an easy man to talk to. That’s all I know about that dude.

JC: Pretty much me, Craig Johnson and John Gibson, all the old Texas dudes.Then we had Bill Taylor for a little while, but I guess they had a fallin’ out with that dude.

JC: Generator, the same company that does Anti Hero. And then Jeff Knuden runs it. He’s the guy that ran Zorlac originally back in the day.

SLUG: How long has Gringo been together?

JC: Three or four years, but I just got on four or five months ago.

SLUG: Represent Texas and tell me your most interesting Mike Crum experience.

JC: I don’t know if I ever really experienced any of them because I was a little bit younger. I didn’t really start partying with Mike until later. I’ve heard a lot of stories. The best one I ever heard was, he was in fuckin’ Europe somewhere and he was mouthin’ off to some huge French guy. And the guy took a glass, like a beer glass, and shoved it in his neck. And I saw it [the wound]. He’s got this huge scar on his neck; it’s gnarly. That’s the craziest, because he could have died.

SLUG: Not that he would die. He’s somehow indestructable.

JC: Yeah, he always manages to float to the top.

SLUG: So John, I think it was on 411, I saw that you built and designed your prosthetic leg, right? JC: No, I just did a lot of modifications like putting rubber shit at the top because I kind of use it like a knee pad all the time.

SLUG: It’s carbon fiber, like one of those cars from The Fast And The Furious.

JC: Yeah, but the heel piece breaks all the time.

SLUG: So do you own a sweet rice-burner street-racing car with an interior that matches your leg?

JC: I have an ’88 Honda Civic. It does have one of those dope tailpipes on it, though.

SLUG: So how old is your kid now?

JC: Six, he’s staying with my mother-in-law while I’m out on tour. My wife’s off working right now.

SLUG: Any shout-outs you’d like to give out before we close this out?

JC: What up everybody! I’d like to say hi to my mom and family. Skate for fun, everybody, and don’t be a bitch!