00:00 / 16:39
Spotify Stitcher
RSS Feed
Share
Link
Embed
I met Holland Redd when he was nine years old. We all crammed into the car and drove to the skate park, all the while teaching Holland new swear words and making him yell them at the drivers of the other cars. When we got to the skate park, it was evident that Holland wasn’t your typical lil’ buddy with a Wal-Mart board. He was already a full-fledged ripper. I’ve never been particularly good at skateboarding, but there is something humbling about skating with a 9-year-old who is better than you, and just about everyone else in the park.

Holland Redd: A Man, A Van and No Plan 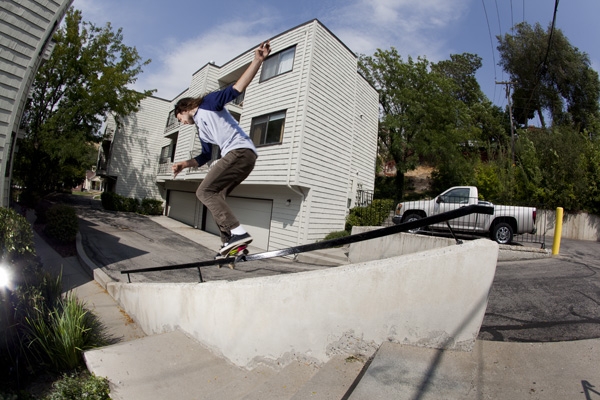 I remember the first time I met Holland back in 2001. I got picked up to go on a usual skate mission with some of the Dirty 48 homies. Biggie Hall was driving and Bryce Ashton was riding shotgun because he was the tallest. Me and Vaughn Perry were riding in the back on the way to swoop up Cody Noble.

When we picked up Cody, he had a little dark-haired child with him. My first thought was that the rumors of Cody potentially being a dad were true. He sure as fuck wasn’t part of some Big Brothers or Big Sisters program. My second thought was, “Great, a little kid’s tagging along, how are we supposed to smoke weed and drink beer today?”

Cody introduced us all to Holland Redd, who was nine years old at the time, and assured us that Holland wasn’t a result of his sperm, and that he was cool. We all crammed into the car and drove to the skate park, all the while teaching Holland new swearwords and making him yell them at the drivers of the other cars we passed.

Why Holland’s mom would let a bunch of scumbags take him on skate missions came down to two reasons, as far as I could tell. She was either too cheap to hire a real babysitter, or she was ridiculously cool. After partying with her a few times, it proved to be the latter.

When we got to the skate park, it was evident that Holland wasn’t your typical lil’ buddy with a Wal-Mart board. He was already a full-fledged ripper. I’ve never been particularly good at skateboarding, but there is something humbling about skating with a 9-year-old who is better than you, and just about everyone else in the park.

As Holland got a little older, he and his buddy, Ashton Eichers, would routinely terrorize their 9th and 9th neighborhood on their shred sleds. About the same time, they were able to sponge rides to Connection Skate Park, which was the hub of the Salt Lake skate scene from 1999-2002,  tucked away inside a warehouse on 39th South and State Street.  Mike Murdock and his mom, Paula, started the place, and to this day, it remains one of the funnest street setups I’ve ever skated. The Mormons have Temple Square, we had Connection. This is where Holland met up with the likes of Andy Pitts and Mark White.

Back then, Andy and Mark were like the glue that pasted together the Salt Lake skateboard scene. They were always doing something positive, whether it was building spots, de-nobbing rails, filming videos or looking out for young guns like Holland. It didn’t take long for Mark and Andy to recognize the natural talent Holland possessed. Andy would float him decks from time to time and he started filming with Mark for Random Lurkurz videos.

At about the same time in 2003, Holland was working on his own sponsor-me tape. He was trying to edit and put the video together himself based off of about eight different VHS tapes—a daunting task for an 11-year-old, but also a sign of passion.
When he presented it to Andy Wise and Matt Schrier at Milo Sport, he got the thumbs down for team status.

If you know Matt or Andy from Milo, then you know how down they are to support the scene and local rippers in general. I’m sure if they could time warp back to when Holland dropped off his Frankenstein-ed VHS of a sponsor-me tape, they would have picked him up in a second. Holland would eventually hang out at the shop and learn how to grip his own decks there with Lizard King looking on and making fun of him for almost cutting off his thumbs in the process.

Like any other skater with ridiculous talent, as Holland got older, his skating got better. When I asked him what goals he had with skateboarding, his answer was as refreshing as that first cold beer that hits your mouth when you get out of jail.
He brought up the fact that kids who grow up skating in California get to see all the pros, and get hungry to make something of themselves, constantly striving to one-up their heroes, sucking some of the fun out of what skating is supposed to be. Holland would rather be here skating with his friends. “I definitely focus when I’m filming, but if it works out, it works out. I’ve known that since I was a little kid. I’m skating more for the fun reasons than anything else,” he says.

It’s not to say he doesn’t go balls-out when he rips a spot. Anyone who skates with Holland knows that. His attitude shows a passion that’s sometimes missing these days. In part, it transfers into his effortless style. He makes every trick he does look easy, and you can tell he’s having just as much fun, whether he’s skating a gnarly 12-stair or doing slappies on a parking block.

A lot of skate missions these days start and end with Holland’s now-infamous, orange VW Bus. It was kind of a touchy subject when I brought up the bus, as it’s currently in the shop, but this wasn’t the first van. Previous to the orange bus, Holland’s mom had another VW that Holland fixed up and that was promptly T-boned.

When Holland took the totaled piece of shit to the auto shop, the mechanic there felt sorry for him and sold him the orange mobile party machine. When I asked him to tell me some of the best party stories about the orange VW, he was a little hesitant. When that van’s a-rockin’, you don’t go a-knockin’—and that bus is pretty much constantly rocking.

When Holland isn’t skating or sleeping in his van, you can usually find him slaving away at the Blue Plate Diner, which has employed many skaters and scumbags over the years. He is currently in fierce competition with Sean Hadley to see who Vaughn Perry deems the best bus boy, keeping the tables nice and shiny and your water cup full.

I asked Holland what it was like to have Vaughn be his boss, to which he quickly replied, “Vaughn is the man!” and wouldn’t really say much more. This leads me to believe Holland is probably plugging Vaughn in this article to get a raise or something, but the kid does bus tables like he skates: fast, natural and clean.

Other than skateboarding, the topic of aliens arose in our conversation. Holland definitely believes in ETs and even said he and his buddies got footage of some one night, but the supreme alien technology blurred the images. He can 100-percent confirm that he has never been anally probed.

Holland can also rip up a guitar, most recently playing with the now broken-up Dark Seas, who were a musical favorite of dirty skateboard boys across the Salt Lake Valley. Since Dark Seas broke up, Holland is still jamming and wouldn’t mind putting a band together. He’s already got the van and the skateboard skills. If this kid starts his own band, all the ladies better watch out—he’s gonna be a full-fledged pussy magnet.

As far as hookups go, the Lizard King is taking care of Holland these days, hooking him up with Deathwish boards and Supra shoes, and filming and destroying shit with Holland whenever Lizard slithers back into town.

When it comes to thank yous, there’s just too many people on the list. “Definitely all my homies and my mom,” he says. Also, Holland would like to issue a challenge to get his homie Colton Naffziger to answer his phone. Anyone who can get Colton to call back will get a free deck from Holland.

See what Holland’s all about for yourself in his upcoming part in Joey Sandoval’s skate film, Call It Venting, out in early October.