Season 2, Episode 1 of “It’s a Rough Life” opens up with Johnny Roughneck, arguing with his “art director.” Flustered and in a sort of panic, Roughneck explains that the tour is a few days away, and they don’t even have any fucking flyers designed or printed.  He knows he can’t do it all, but he feels the need to, sometimes—well, most of the time. He’s high-strung, opinionated, passionate and determined. Why is the flyer so damn important, what is this tour, what is Roughneck Hardware and, most importantly, who the fuck is this guy?

I Thought I Told Ya… I’m a Roughneck Souljah 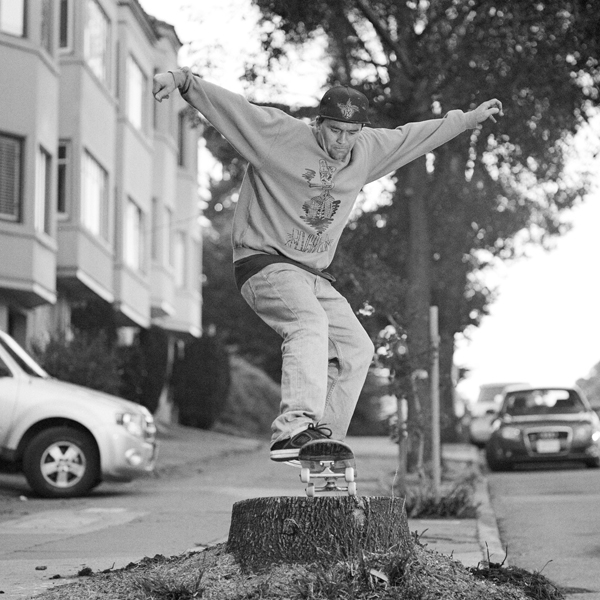 Season 2, Episode 1 of “It’s a Rough Life” opens up with Johnny Roughneck, chief and commander of Roughneck Hardware, arguing with his “art director,” Jimmy Nelson. Flustered and in a sort of panic, Roughneck explains that the tour is a few days away, and they don’t even have any fucking flyers designed or printed. Nelson calmly assures him that the flyers and new T-shirt designs will be done next week. With no time in between business calls, event planning, parenting and overall chaos, Roughneck cranks out a piece-of-shit notice that looks like it belongs in a DIY zine. He knows he can’t do it all, but he feels the need to, sometimes—well, most of the time. He’s high-strung, opinionated, passionate and determined. Why is the flyer so damn important, what is this tour, what is Roughneck Hardware and, most importantly, who the fuck is this guy?

John Griffin, aka Roughneck, was just another white-bread, working class Baltimorian, jacking cars and disrespecting “your momma” in his early teens, when he discovered skateboarding. One day, a bunch of metalheads rolled through his hood, headbanging and weaving through traffic on wood and wheels. Griffin’s life was changed that instant. With a way out “da hood,” Griffin literally rolled his way out of the prison-bound lifestyle he was leading into an early adulthood filled with Cali dreams and college aspirations. Griffin packed up and moved to San Francisco, where he enrolled at San Francisco State University. When not enriching his mind, Griffin enhanced his skating skills, and eventually started to receive flow from the now-defunct Chaos Skateboards, among others. Just as things started to look bright, an injury showed the dark side of the skate industry.  “Once I hurt my knee, my sponsors started acting funny. It was then I realized I had to look into something else,” he says. Knowing he wanted to make skating a part of his life forever, Griffin set out to discover his next stroke of good/bad luck.

“I took the day off from school and drove over to Oakland, and was looking around at the buildings and saw a metal manufacturer and I thought, ‘Bolts. I can start a bolt company.’” With a low start-up and product cost, this seemed like the perfect fit for a struggling student, not to mention the lack of competition being just a hardware company (metal’s metal, no matter who’s selling it). With his pockets empty and a car full of nuts and screws, Griffin drove back across the Bay Bridge and thought to himself, “This has got to be the most roughneck thing ever. I just spent all my money and quit school. This is some roughneck shit. Fuck it, that’s it!”

Roughneck Hardware became a “for the homies” company during the mid-’90s. With no packaging, Griffin began handing out samples to the local skate community. Being just another johnny from the block, he soon became know as “Johnny Roughneck,” the hardware guy. The nickname stuck, and, over time, would cause and/or resolve several altercations. With his new persona backing the brand, Roughneck began to gain recognition.  “We started [assembling] a solid team that’s roughneck for life. Once you’re in, you’re in—kind of like the mob,” he says. With the sting of company betrayal still in his blood, this credo set Roughneck apart from other brands. Skaters would have to personally call Roughneck to be removed from the team—even if they stopped skating, they would still receive a box of product unless they officially quit. This loyalty would eventually lead to one of the most diverse and largest teams on record. Unfortunately, Roughneck was giving away the majority of his product, and it wasn’t till the ARS Tradeshow in 1997 that Roughneck would officially become a business.
While attending the show, Roughneck was approached by a shop buyer to ask about selling Roughneck Hardware. He hadn’t even established a selling price, but his brand was generating solid buzz. It was time to branch out. Luckily, an éS drawing for a year’s supply of shoes would be just enough funding for the road trip—legitimately, a shoestring budget. After demanding all 12 pairs of sneakers at once, Johnny was sent to the warehouse, where he picked up six pairs of Kostons and six Muskas, all size 9.5 (the most popular models and size). Over the next few weeks, these kicks would be bartered for a place to crash or fuel. What started as a short trip to Arizona turned into a country-wide promotional tour. Once the last pair of shoes were exchanged for a pillow in New York, Roughneck returned to San Fran and began fulfilling orders.

Over the next three years, the business provided enough party funds for Roughneck himself, but the start of his family and financial need took precedence. With the money he made, Roughneck started a valet parking service that would provide enough dough to feed the kids and support a wife, but skating was never far from his mind. He decided to stay involved by only employing skaters. This way, he could keep his hardware company alive in spirit, even though the priority had changed. As his kids grew older and his marriage began to hit the skids, it was time to choose. “What do I want to do the next 10 to 20 years of my life? So, I decided to refocus on the hardware company. Maybe it’s actually something I can leave my kids down the line,” he says.

By 2006, Roughneck Hardware had been around for a decade and held the support of skaters and other industry vets. Based in San Fran, Roughneck had the likes of Thrasher and Deluxe as business models. “I saw them going to trade shows and setting up booths, or they would go on tour and tell me to grab my stickers and bolts and hop in the van. But they were never on my terms.” Roughneck needed his own way of branding his company, and getting the word out to skaters. “We were riding the train to the skatepark, and my friend Elias Bingup was like, ‘This is ingenius! The BART Tour. Bay Area Rapid Transit. Bay Area Roughneck Tour!’” By utilizing public transit, Roughneck assembled a tour of the nearest skateparks. For the first couple years, it was mayhem: a bunch of older dudes swilling tallboys on the train as they hopped from park to park. As the event grew, though, more and more kids became interested. What set this tour apart from the old-fashioned skate demos was the sense of camaraderie and community it created. By riding public transit from spot to spot, every kid was welcome, whether you were from the hood or the suburbs, whether you had a skateboard or not, and together they cruised the city’s streets and skateparks.

Panda, an SLC local (if you didn’t know), had been working with Roughneck out in Cali. After seeing the BART Tour, he mentioned that Utah had a similar transit system, Trax. With a few outside connections through business affiliates, Roughneck was introduced to SLUG Mag. “My buddy, [Hondo], had just opened Brick & Mortar, my art director knew Angela [Brown] through some business connection and sent [SLUG] some links to the BART Tour. We saw the name Trax and were like, ‘Wow, Roughside of the Trax,’” he says. With the Summer of Death skate series already in existence, the fit seemed logical. “Let’s not worry about the details—let’s get out there and get this first one over with. There were a lot of spots and cool things to skate. Mobs of diverse kids showed up—it was great,” he says.

As a way to market the brand, these tours were filmed and posted online. This would lay the foundation for “It’s a Rough Life,” a reality show based on Roughneck’s personal life and company dealings. In 2006, Jeremey Lavoi produced a mini-documentary piece on Roughneck, which planted the seed for the reality series’ inception in 2010. “The guys that were filming it all, Team Jaded [Jeremey and his wife Abby Berendt Lavoi] … wanted to produce a couple shows. We … put a couple of the guys in the van and went somewhere,” says Roughneck. “At that time, I was going through a lot of personal issues: the kids, going through my divorce, and the [Team Jaded] guys were like, ‘We got to film a show.’” Calls stared coming in from Discovery Channel, MTV and a few other interested parties who had seen the BART Tour posts and the pilot. While negotiations are currently ongoing, they decided to release the videos online. That way, the footage doesn’t get stagnant or go unseen.

As Roughneck awaits his chance at fame and fortune through reality stardom, he works part-time at, ironically, Hotel Utah in San Fran. His company is on the border between viable business and underground street credit. As Roughneck put it, “We’ve graduated high school and we’re ready to go to college.” With the help of the web series, Roughneck is starting to gain recognition outside of the skateboard world. “People can’t fathom I’m not rich. Same with Roughneck [Hardware], since we’ve been around so long,” he says. But, as Johnny says, “Who needs luck when you’re a Roughneck? Meaning that, whatever happens, it’ll always work out.” So far, so good.

Johnny and the Roughneck Souljahs will be hosting Roughside in Utah on Sept. 8 at Fairmont Park as the final stop of this year’s Summer of Death series. Go to summerofdeath.com to pre-register for the event. Visit roughneckhardware.bigcartel.com to purchase Roughneck products and stay current on the team, and view Roughneck’s show at itsaroughlife.com.