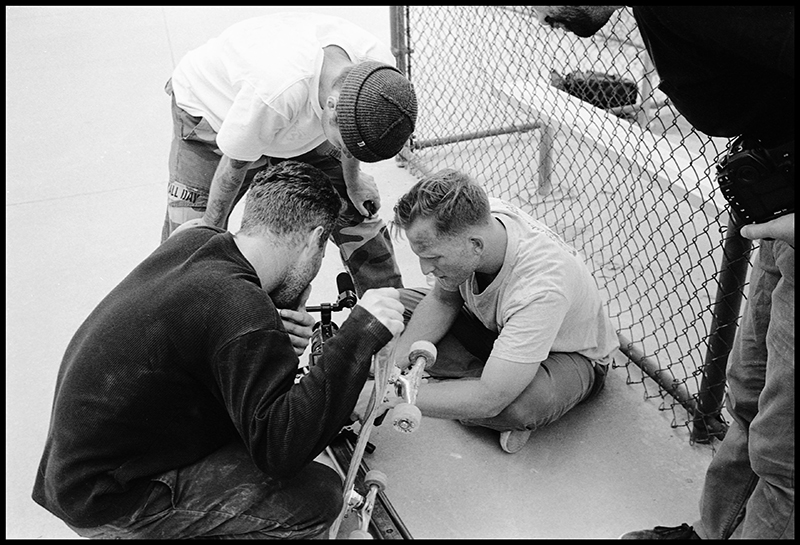 The Men Behind the Lens: @Flatspotter

In the social media age, content is literally at our fingertips all the time. Platforms like Instagram, Twitter and Facebook make it simple to see what your best friends, idols and favorite stalk subjects are doing at all times. When it comes to skateboarding, Instagram’s skateboard content is mind-boggling. If you are a Utah local skater, chances are that you are part of the 33,100-plus people following @Flatspotter. An organically grown and natural evolution that came from the love of skating and videography has become one of the biggest and (in my own personal opinion) best platforms to see your favorite local skaters at your favorite local parks, absolutely killing it. Mastermind of the lens Dustin Hill and longtime friend and business partner Bryce Parkinson are the enveloped whole that is @Flatspotter. While Hill takes the cake on the filming, Parkinson is the man behind the scenes pushing fresh wood, wheels, soft goods and whatever other items the duo can dream up. What started as a platform to upload videos and get the community hyped is now a killer team of rippers (pictured here), a line of skate products (available at your favorite local shops) and still an engaging and active community with whom to share skateboarding. @Flatspotter was born out of love and thrives on that love—and the duo agrees that it’s something skateboarding needs more of.

With A combined 39 years of skateboarding under their belts, both Hill and Parkinson are no strangers to the industry. From @Flatspotter’s original montage of Utah rippers and head explosions, @Flatspotter has grown up and out in many ways. “It started probably about 2012 as a video and online persona where I could share my videos (since that’s my trade),” says Hill. “At first, it was all about just sharing Utah skateboarding and a bunch of my friends, and there was really no outlet to share what I was already filming. It’s definitely still about Utah skateboarding, but now we have the team and we are pushing boards, so there is a lot more direction and focus.” Parkinson, on the other hand, who is the former owner of Shortbus Skateboards, joined in the movement roughly three years back with the idea and resources of putting wood to the streets. “It started with some wheels, and then Dustin talked about doing some boards, so we just came together since we were both pushing towards similar things,” Parkinson says. @Flatspotter has been a slow progression of what it is today. “It’s all come about in such a non-traditional way”, says Hill. “There was a website, then the Instagram and social media side went crazy, and now we have product and a team, so it’s all come very organically and kind of randomly,” Hill says. “Now we feel like we have a real board company and a team and an actual direction.” With products comes a financial responsibility, but both Hill and Parkinson agreeably say they are still about keeping the Utah scene hyped, especially on the social media side of things.

Speaking of the team, the @Flatspotter roster is, to no surprise, a heavy bunch of rippers. With all-time Utah killers like Matt Fisher and Shilo Sweat and young gun Deng Tear as well as a couple of “flow” Utah homies, there is no shortage of banger footage coming from the @Flatspotter squad. If the one-minute Instagram video feature only heightens your anxiety to see more of the @Flatspotter homies, there’s good news! “We are working on a video, a half-length, as we like to call it,” says Hill. “It’s a full-length, but no one has any attention span anymore, so a 15-minute video is now considered full-length.” Parkinson adds, “It’s been in motion for about four months now, with about six weeks of really skating and really filming, and I’d say its pretty good so far. Between Matt [Fisher] having a case of the warmup bangers and then Shilo and Deng just ripping, we’ve seen some pretty cool tricks go down.”

As far as the future, Hill and Parkinson hope still to be ripping and staying afloat in the scene. “Hopefully, we are maintaining and still moving product,” says Parkinson. “The newest boards have been moving the best as far as online sales and the local shops who have been supporting us, so we’re optimistic.” Of course, they’re staying humble. Hill says, “Thirty-one thousand Instagram followers doesn’t necessarily mean you are killing it, since you’re competing with literally every other skate company out there.” As a whole, the skate industry has seen some real fluctuation, not only in brands and skaters, but a vibe in and of itself of what is considered “cool and core” and what is considered “corporate and lame.” “We just want to see more love,” says Hill. “Not only in Utah or anything in particular but from the industry and collectively, just as skaters coming together and being hyped on the same thing.”

There’s no question that Utah’s is a strong and growing skate scene and that companies like @Flatspotter not only give this scene a platform but are now contributing with their products. As long as the support goes full circle, more companies, shops and industry influencers can stay afloat and keep the progression alive on all bases. Hill and Parkinson do what they do out of love and out of the need to share their creativity with whomever is hyped on it. If you are not already, follow @Flatspotter on Instagram and support them online and in your local shops. –Steve Goemaat