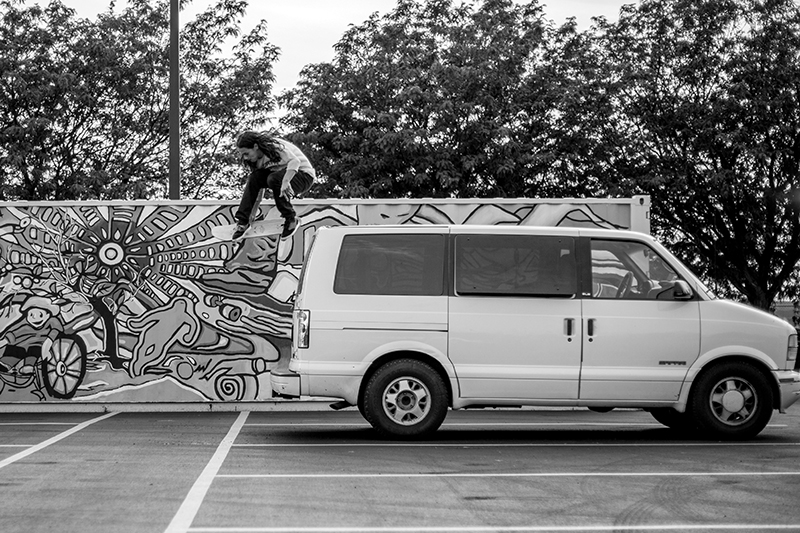 Salt Lake City local Mikey Martinez has passion in spades. The dude fits a skateboarding archetype—including loose-fitting, blown-out pants and long, wavy hair. More importantly, he boasts ambidextrous skills to pump out of bowls in parks and jam down rails out in the streets. Mikey says, “For me, it’s just the way I live.”

As a young buck, Mikey grew up skating with his older brother, Ervin Martinez, and the Sk801 crew. Some of his other influences include Deathwish and Baker. Receiving hand-me-downs from his brother, he grew up ripping Sojo and Sandy Skatepark along with other street spots. He says, “I remember just cruising around, listening to Motörhead with my brother … just jamming so hard on the way to spots.” He has pieced his own style together, moving away from skinny jeans and puffy shoes to loose-fitting gear that helps the art flow. “Kinda like Brian Herman, kinda like gangster but still hesh, ya know?” he says.

Though there were a few years when Mikey tried new hobbies while living in Mexico, he says, “I always came back to skateboarding.” As an artist who’s passionate about his lifestyle, he compares the love he has to skateboarding with other artists who constantly work on their craft. “Anything I look at, anything I think about relates to skating.” With definite goals of becoming a pro skater, Martinez has been racking up clips with help from local videographer Tyler Adams. Last September, he dropped a video edit that you can find on YouTube called Mikey Martinez Manifest Your Mind. “I wanted to show people my art form … what I’m really about,” he says. Consistently grinding in the park or the street, he’s locked down wheelie grinds, frontside indie—he even enjoys pumping out airwalks. Mikey is also working on a new clip this year, in which you might see some back tails that he has been trying to get down.

Recently, Martinez was cleared to skate after breaking his elbow while trying to back 50 a down rail. “I couldn’t even extend it,” he says, but “I’m gonna keep skating till my body can’t take it.” Sometimes you’ve got to risk it to get the biscuit, and though the injury left him with some screws and a rad scar, you can be sure that it isn’t going to stop him from chasing his goals and continuing to work on his craft. Even if it’s just looking at objects driving by: “In my head I picture myself grinding it,” he says, “even if it’s shit that’s impossible to hit.” He turns urban landscapes into dope street spots every chance he gets, to stack more footy and taking some heavy bails while he’s at it. Though authenticity is rare, Martinez strives to innovate every spot he comes across. “I wanna try and skate in a different way that no one’s really thought about,” he says. Sometimes you just need a new lens to look through to see things a little differently, and watching him do some rad wallie combos off a chair in the middle of the road at a police station prior to interviewing him definitely demonstrated that for me.

He’s on the come up in Salt Lake City’s skateboarding community, putting out burley video clips on his social media and YouTube. He is also currently working on releasing a new part, and during his free time, he enjoys doing some slappy street sessions on benches at police stations with his homies. Mikey has plans to continue to practice his craft everyday and search for new spots to hit. He posted a small clip of some throw-away shots on social media a while back, but due to his elbow injury, he was delayed on working on any edits until recently. He has been able to get back to the ol’ grind and start cooking up some sauce for a new video edit that’s aimed to be served later this fall!

Mikey lives the skateboarding lifestyle, aiming to party hard and skateboard harder. He brings flavor to the game, but just like he says, “Fun is first!” Martinez has a been making noise on a skateboard since he was knee high to a beer can, progressively growing his craft into his own style of skateboarding today. You’ve got to give respect to the painter expressing himself on the canvas. For a dude who does that shit with a skateboard but explains it like he’s painting, I could not see a better word for Mikey Martinez. He and Bob Ross would get along amazingly. He’s got passion for what he does, and that’s hands down got to be one of the dopest things you could have for something—especially skateboarding. –Zach Lambros