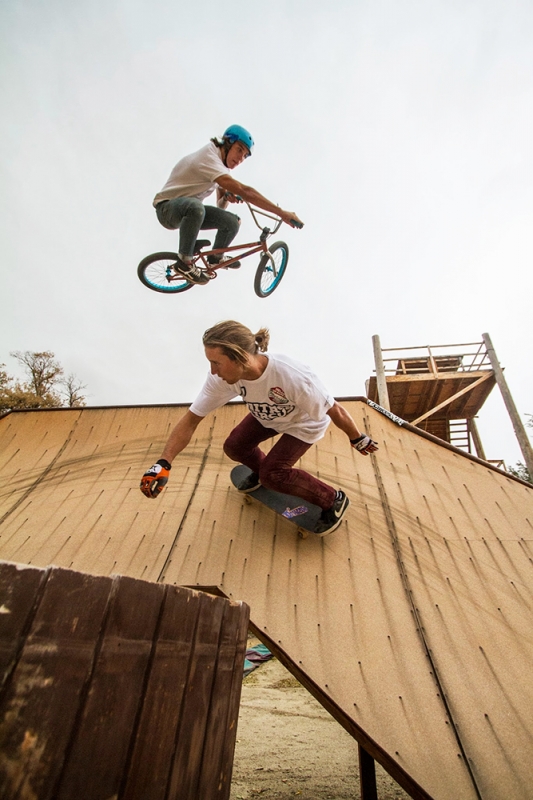 When describing the way to my house to people when I was younger, I would give landmarks just like anybody else. I’d say, “after the sharp curve,” or “just before the big tree.” For the Godfrey household, just keep your eyes peeled for the mini Mega Ramp—you can’t miss it. Gregg Godfrey is the co-creator and producer of MTV’s Nitro Circus. Gregg and the Nitro crew are best known for insane stunts, tricks and contraptions that they dream up and make a reality within their TV shows. Dating back to the early days of Travis Pastrana and Gregg doing stunts on dirt bikes and mountain bikes, the show has evolved to a proportion where nothing is out of the question.

Over the years of reality TV shows, DVDs and a Fuel TV mini series, the show has grown to a live-performance event, which is making its North American debut this January. On tour with Nitro Circus Live is a star-studded cast and some new, blood-related additions. They call themselves the Godfrey Clan: They are the sons and nephews of Gregg Godfrey and they are quite the talented bunch. Made up of Ethen Roberts, Josh Roberts, Tyler Roberts, Chanler Godfrey, Gavin Godfrey, Preston Godfrey and Colton Brockbank, they are the guys following in the footsteps of Gregg and the people they grew up around. As genetics would have it, these guys are equally willing to throw themselves in any different way to push their sport—or whatever you call it—to all new levels.

Following in the footsteps of guys like Gregg and Pastrana is no easy task. To keep these guys at the top of their game, the backyard of the Godfrey residence in Sandy, Utah is an absolute training facility for all things that are awesome. A miniature version (which is still pretty big) of the Mega Ramp that they use in the Nitro Circus Live shows is the focal point to the four-acre compound. A double-wide skate ramp with transitions modified on all sides is the next in line, with a roll-in that drops into the bike and dirt jump course in the back corner of the yard. The facility is a dream place as far as I am concerned, just as long as you’ve got the marbles to hang. I personally don’t see myself going off of any Mega Ramps anytime soon, but around this crew, anything is possible.
Gregg Godfrey, the captain of the chaos, gathered up the Godfrey Clan, and we talked about the aspects of the group: strong points, weak points, who the guinea pigs are and who has gained some wisdom throughout the years. First up was Colton, described not as a guinea pig, but as the gerbil of the bunch by Gregg. Colton enjoys skateboarding, wakeboarding and jumping around on all of the other contraptions, even the snowboard on wheels. Next up was Ethen, who claimed to be, “not really good at anything, but above average at most things.” I can tell you from my short, firsthand experience that Ethen is one talented kid. In a matter of a couple minutes, Ethen had gone from back-flipping his mountain bike to catching midair touchdown passes from Colton. As far as energy goes, these dudes put the Energizer Bunny to shame. Down the line, we go to Tyler, who, as his clan told me, was a “job-stealer.” Bikes, snowmobiles, tricycles and pretty much everything else-—Tyler is up for it. Gregg chimed in on the issue and clarified that, “Tyler isn’t necessarily a job stealer—he is just the dumb one to try it first. He is a guinea pig, just like all of these guys.”