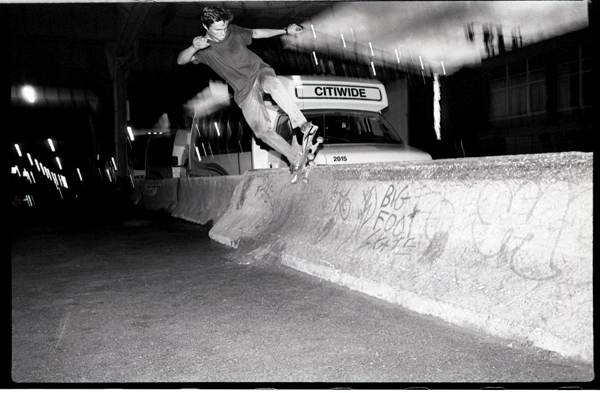 No Sleep Til’ Brooklyn

New York City is America’s greatest city. Sorry Salt Lake, better luck next year. There’s something timeless and classic to New York that makes it different from everywhere else. Maybe it’s because we’ve made an icon out of it in movies and on T.V. Or maybe it’s just the fact that it is the biggest city in the United States (population-wise, anyway).

New York was the first destination in a recent trip I took. I was there for a short time but it was the first time I actually really got to skate there. Every other time, it was with family or just to drink myself silly. This time, I remained strangely sober (except for that one night, thanks Marty and Brandon!) and did a ton of skating in the course of a few days. Here are a few random observations if you plan to take a skate trip to New York.

1: Half the state of Utah seemed to be there when I was. A lot of my homies were staying somewhere on Long Island and I kept seeing people with BYU shirts on. One night I got lost trying to find the right subway. I ended up wandering around the Lower East Village through some cutty-ass neighborhoods for three hours. Coincidentally, I ran into my friend Elisa, who I know from Cedar City of all places, on the street. She happened to be there on her honeymoon and used her map to help me get to the subway. Like I said above, New York is America’s biggest city but it occupies a small bit of land. So, I guess you can run into people pretty easily.

2.Spend $25 and get the weekly pass Metrocard. It will get you anywhere you want to go on the subway. Don’t ever rent a car in this city, as there is no parking.

3. If you meet the guy on a street corner in Soho named Tiger Hoods, buy a photo from him. Also, ask to see his photos of a girl getting her vagina pierced. It is disgusting and intriguing at the same time.

4. If you go to Greenpoint/Williamsburg be sure you have a mustache and white jeans. Also, there’s a nice deli next to the Mexican restaurant on the corner of Larimer and Metropolitan Ave. that has a great sandwich called a Douchebag. They also have a sandwich called Try Me Beeotch.

5. I seriously saw a fixed-gear bike in Williamsburg that had an alarm on it. Seriously.

7. Brooklyn always has and always will do things it’s own way. Case in point: the virtual skatepark under the Williamsburg Bridge (not the Brooklyn Banks, those are in Manhattan). Somebody just started pouring concrete there and now there are banks and ledges.

8. Speaking of ledges, go to the city run skatepark under the Manhattan Bridge if you want to skate ledges.

9. Yes, I went to the Brooklyn Banks. If you go to New York to skateboard, it’s mandatory that you go there. They won’t even let you off the subway with a skateboard unless you tell them you’re planning on going to the banks.

10. My ideas of New York skateboarding are heavily influenced by Ari Marcopoulos’ photographs from the late ‘90s. I found his representation rather accurate even to this day (even though he’s not a skater).

11. Coney Island is worth going to, not so much to skate, but totally to people watch.

12. My homies from Utah killed it on this trip. Amazingly enough, none of them had a video camera. It was fun just to skate through the streets and hit up spots on the way. Skateboarding is about fun, right?

13. I guess since this is supposed to be a skate article, not a “My Life is So Awesome” article, I should mention who I skated with. In no particular order, I’ll start with the Utah dudes: Andy Hill, Austin John, Garrison Conklin, Jovi Bathemess and Glenn Calvert (I heard Jesse Trujillo was there too, but I never got to meet up with him).
And my friends from Brooklyn: Brandon Fonville and Marty (I don’t know his last name but he was from Pennsylvania and killed it). Also, I need to give a shout out to Anne for letting me stay at her house while I was there and Mike Peters and Dennis (from Jersey) for the enjoyable photo-nerd talk in the village.

14. Last, but not least, if you go to New York to skateboard and “get hammers” maybe you should go to San Diego or Los Angeles. If you want to cruise the street and do some wallies and some 5050’s, this is the trip for you.