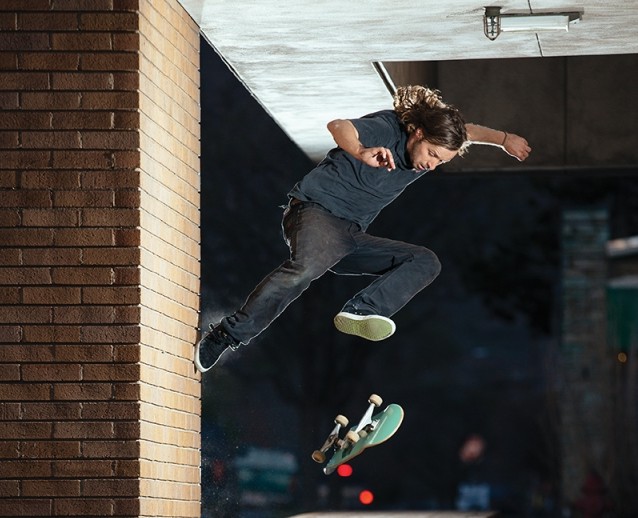 Recently, SLUG had a chance to catch up with up-and-coming Utah County skateboarder Parker Garrett outside of Utah County indoor skate park, Banzai. He is a Provo native who is not shy to think outside of the box and get his feet bloody every now and then, and is helping progress the Provo skate scene with his skill set. This 21-year-old has a relaxed style that you can’t help but watch.

Garrett is in a video by local skate videographer Dustin Hill—aka Flatspotter (@Flatspotter on Instagram)—titled Bloody Feats, in which he skates barefoot. Additionally, 360 flips, handrails and wallrides do not unnerve him in this video. It also seems as though he doesn’t care about his feet and would prefer them without skin. “I was skating Orem Park, and I had a hole in my shoe that was rippin’ up my foot,” Garrett says. “So I thought I might as well take off my shoes and do a couple tricks barefoot.” The next day, Garrett called Flatspotter and told him that he had an idea for a part. Bloody Feats showcases how mangled Garrett’s lamborfeeties end up and how determined he is when he’s trying to land a trick.

Barefoot skating isn’t just for YouTube, though—Garrett has also flashed his naked feet at a contest for the children to see. “That was at Volcom’s Wild in The Parks contest,” Garrett says. “I planned on doing a barefoot feeble just to be funny. Then one of my friends wanted me to do a back lip and also told the kids that I was going to do it. So I ended up landing it and winning hype of the day for [a] barefoot backside lipslide down the handrail.”

Most of the recent footage you can find of Garrett is on Flatspotter’s YouTube channel (youtube.com/dhillwhat). Flatspotter posts on Instagram frequently, and the YouTube channel has uploads of contests and video parts from local sources. Garrett sheds some light on the local videographer: “He has been filming for a long time,” Garrett says. “He made @Flatspotter in order to show that there are skaters in Utah who are ripping. He is trying to represent the Utah scene and highlight locals.”

Garrett says he first picked up a skateboard because “My brothers did it,” but what really got him into skateboarding was The Hot Chocolate Tour skate video. “I was probably like 12 or 11 when I saw it,” says Garrett. “Marc Johnson and Kenny Anderson in the video really had me wanting to skate—their style was and still is amazing.” His technical side recalls Johnson and his smoothness is reminiscent of Anderson. Garrett is an easygoing guy and doesn’t seem to sweat the small stuff. He tells me that he is not sponsored, which is something that confuses me because of his high skill level. He is in no way a lazy person—he just takes things as they come. Fortunately, the guys at Milosport in Orem hook Garrett up with a board every now and then. This indie music–loving Subaru driver is ready for the road ahead, even if he isn’t too sure where he is going. This translates to his skating with his readiness to skate whatever comes his way.

At the end of the interview, Garrett has the idea to skate the Provo Plaza, a park he frequents and uses as a place to skate and meet up with homies Tyler Braithwaite, Matt Bergmann and Tyler Wizard. Garrett loves skating street, but the plaza is a bust-free environment. “It’s hard to find a spot that’s not a total bust,” he says. “Sometimes, you get two tries and that’s it, especially at BYU—I just got a ticket there.”

Garrett is kind enough to let me film him while he is skating. He lands a hurricane first try on the flatbar and comes up to me to see the footage. I show him the footage but realize that he isn’t framed right. I feel bad for messing up the video, but this doesn’t faze him, and he’s down to do it again. He takes a slam the second time, but the next try, he rolls away clean, smiling. The feeling of rolling away from something you have worked hard for is like nothing else, and I can see it on his face.

He pulled a lipslide bigspin second try on the flat bar, and a feeble on the A-frame at Provo Plaza. Garrett enjoys skating rails, but he is versatile and is down to skate whatever. Garrett is currently stacking clips for something to put out in the future. If you want to watch him skate, find him on Flatspotter’s YouTube channel, or follow Garrett’s Instagram (@pgnar). Or you could go skate Utah County—maybe you will find him in the streets.