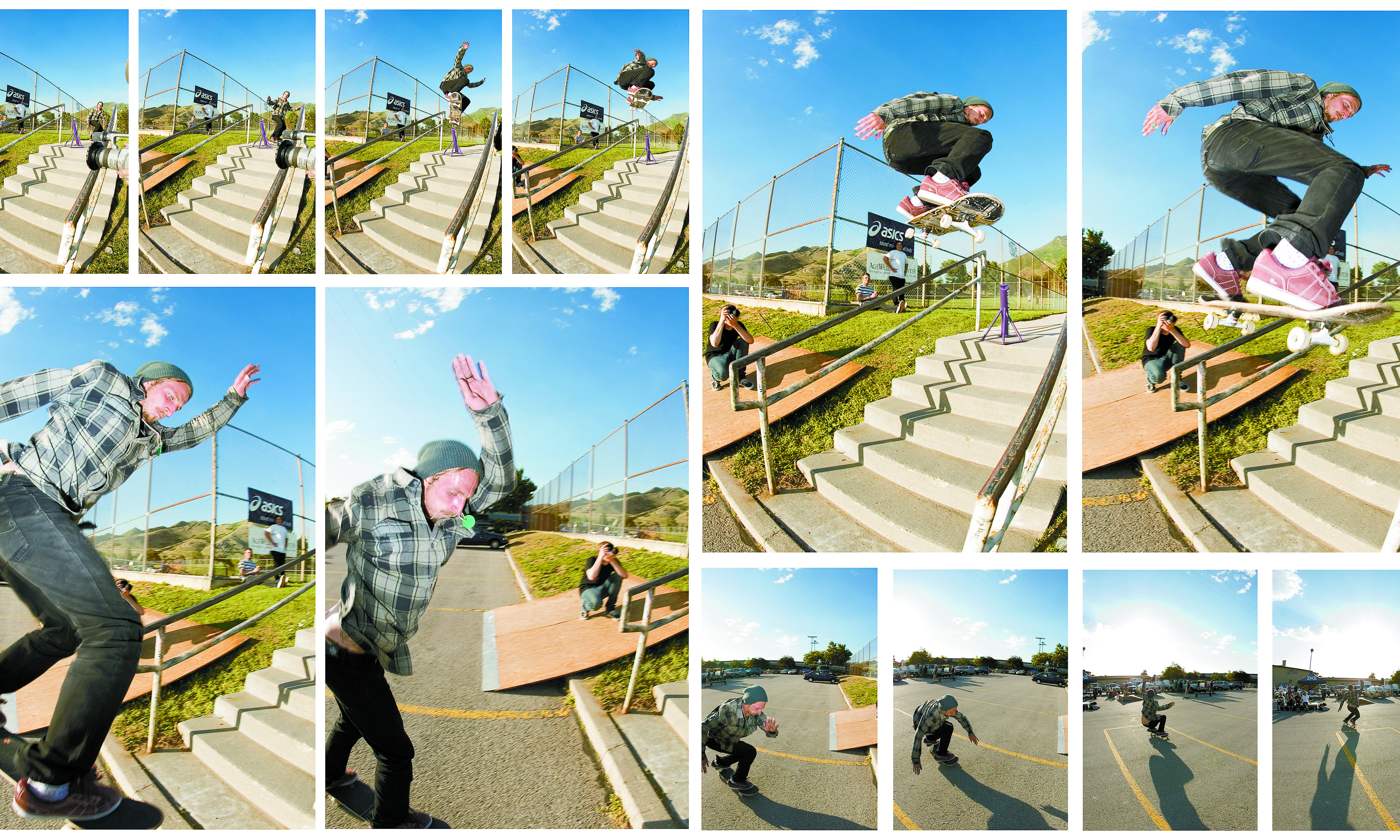 It’s getting hot up in this piece as of lately and there is a lot of shit to talk about.
First and foremost, our best wishes go out to Jason “Jersey” Taylor who is having some medical problems. Get well brother and give a Mexican a call. Congratulations again to Mark White and Tennile Petty, now known to the world as Mr. and Mrs. Mark White. Congratulations also go out to Shawn McCumber and his girl Bonnie down in New Orleans; they have a bun in the oven. If you don’t know what that means, there is a beautiful child about to enter this world. Brian Baade some how has put together a professional contest at South Jordan Skate Park. That contest will be in the bowl for Christ’s sake. Props to you Brian, not good looks. SLUG Magazine’s very own Bob Plumb is entering Slap Magazines Photography Contest. Let’s hope he wins because that’s my dawg. In other skate park news, it looks like Rose Park will be getting one. I’ve heard it looks like a mini American Fork. When it’s built, be on the look out for board jackers and other lowlifes to be lurking hard. Look for that Automatic Magazine article on Dirty Hads in the next few months to come.Milo Sport hosted their annual Canyon Rim Handrail Contest and it was once again a success. Adam Dyet won with a kicky back tail and a kicky back lip. Lizard came in a close second with original style and a pole jam 180 over the stairs and a pole jam board slide on the rail. That shit was sick. Oliver got third with blah, blah and blah, not necessarily in that order. Zinelli had a proper suski grind and almost got the 180 out, backside of course. Little Brandon also showed everyone how to do a sweet ass looking kickflip.More skate park news. Looks as though we’ll have to wait until the end of August to find out the final verdict on whether Fairmont will be getting lights for the skate park. It’s pretty much a go though. See what happens when you get involved with city planning meetings and such? Also, it seems that Quail Hollow Park (9000 S. 2700 E.) originally had plans to be built with a skate park in it. The new plans, however, don’t. Instead they have basketball courts, baseball diamonds and a dog park. These news plans are under scrutiny and review as of now. Voice your opinion at [email protected] or Nancy Shay 801-568-2900.Utah the land of mayonnaise and skate parks – I’m in heaven.

Oh yeah, the Matix Am team was seen rolling through the valley with Jordan Williams on hand along with Lamare Hemmings, Torey Pudwill, Boosch, Mike Mo and my favorite Marty Murawski. Remember to watch your language and bad behavior (smoking cigarettes and dope, which now constitutes you being a bully) if you’re at Sandy’s Lone Peak Park. Surprise visits by Sandy’s Mayor have closed the park and officially put all you little turds on probation. Now, off-duty police officers will be attending the night sessions. Don’t think they won’t do it again. If you want to cause a ruckus go to 9th and 9th. No one cares about anything there. Just kidding.

SLUG Magazine in conjunction with the Summer of Death Contest Series is stoked to announce our “Red Bull – Why I want to go to Woodward Contest” The nice people at Red Bull have put up a scholarship for a free session at Woodward West Skate Camp in California. All you have to do is write us an essay saying why you’re the best little trooper to go on this mission. Don’t worry – we won’t judge you like your schoolteachers do. We don’t care about grammar, spelling or any of that stuff. We just want the best heartfelt reason you should be there. Adults meaning anyone over 18 are not allowed to enter. The winner will be announced at the Summer of Death Secret Locations Contest on August 11th at the award ceremony. Send your essay to Slug Magazine at www.slugmag.com or to 351 Pierpont Ave. Ste. 4B SLC, UT 84101. If your parents are OG enough to have a fax machine, send it to 801-487-1359. Become the next Ryan Sheckler at Woodward West.