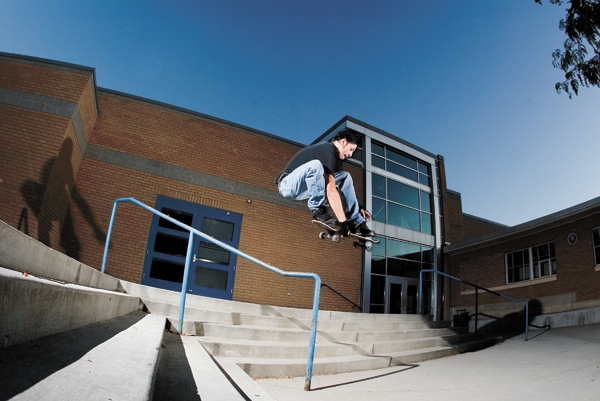 Before you throw this magazine at the wall in disgust, I want to assure you that this is not gonna be a mother fucking puff piece. “I’m a cutter, that’s why they call me Scratch,” Leyba let me know. He has cut up every inch of his body, except his penis.  Andy has a rich history of violent, aggressive, drunkard behavior that has kept him in jail for the better part of the past decade.  In fact the past six months has been the longest stretch he has been out of jail since he was 18.  He’s a lost boy, his father Jesse Leyba, three times over the legal limit fell out of a moving train and died when Leyba was just eight years old.  That fateful day was 1/11/93, a significant date for sure. 111 is the symbol he carves all over his jack-o’-lantern of a carcass.  “I’m lost without a dad,” he says.  This past year Andy found a suitable substitute, a strap-on if you ask me, but a phallus of discipline and salvation either way. Leyba was dunked recently in the holy water of Christianity.  He explains the process as an awkward procedure that takes place in an oversized bathtub.  “I felt all my sins, every bad thing I ever done wash away, I thought the water was gonna turn black,” he says.

SLUG:  What’s the worst thing, in your eyes, you’ve ever done?
Leyba:  Probably when I was humping my pillow, and I looked at my fan, because I was done humping furniture, and my fan tip toeing away, and I was like ahh dude, cause I knew if I turned it on it was gonna blow me. Just no more humping furniture.

SLUG:  Have you humped furniture since?
Leyba:  Yeah I still kinda do.  Pillows are like shaken and shit.  My pillows are like “ don’t roll me up I seen what you did to the fan.”

It doesn’t matter though, considering he can recite a memorized prayer with his goose egg omelet in the morning and with the Jesus power all is forgiven.  The goose egg omelet has to do with the fact that he lives on a miniature farm on Bountiful’s west side with his wonderful grandparents Albert and Martha. Leyba showed us around his grandparents compound on a pleasant Sunday evening.  There were hens, a rooster, parrots, sheds, bunnies and geese.  He explained that he’s here to stay, mainly because he’s running from warrants in different states.

He’s been a drifter living on the streets of Missouri, Phoenix and Las Vegas.  He panhandled and drank, he told me stories of knife fights and drug use.  He settled into Las Vegas after meeting a girl.  She was three months pregnant at the time and Andy felt he could be a responsible father figure to her little girl. He tried, I’m sure. However, he found himself going to jail the night she went into labor.  This time he was at a marijuana farm at the exact time of the “five-o” infiltration.  Leyba spent three months behind bars for it.  He got out and fathered that child for three years.  It was around this time that everything collapsed in his life once again.  He was most likely drunk when he decided to put his cigarette out on his then fiancés neck. This initiated the eventual loss of everything. He explains:   “Here you go, it’s like a country song.  I lost everything, I lost my truck, I lost my dog, I lost my fiancé, lost my little girl, I pretty much lost it all.  Most of all I lost my skateboard.  Forget the little girl, forget my truck, forget my fiancé, and forget my dog.  I lost my damn skateboard!  It’s the only thing I care about.

Andy moved up here after this last climax that subsequently lead to more jail time.  He had nothin’ but a Kotton Mouth Kings t-shirt on his back.  He begged his mom for months to buy him a skateboard so he could enter the SLUG Summer of Death contest.  She finally gave into his demands if not by the point of his knife.  He rode the bus to the Summer of Death event.

He skated in soaking wet sweat pants. His life will never be the same, or were they velour? Well, whatever the fuck those gigantic, sopping wet sleeping bags around his legs were made of, they got him noticed for sure.

SLUG: You’re ready to take it all the way?
Andy: All the way baby, Ohh!

SLUG: Is that why you’re so full of life right now?
Andy: You don’t even know … this has changed my life. My second place, who paid ‘em off?  Second place in SLUG Summer Of Death contest series.  What the hell?  It was a reborn moment.  It’s all been goin’ great right now.

Make no attempt to slow a mad man from his cause. For he’ll surely strike you down with the veracity of will unleashed on the deserving victims crown.

Andy is a goddamn mad man.  He skates with relentless passion, smiling and laughing with every slam and every land.  With pure energy flowing through his reborn veins he is realizing that he is in control of this amazing destiny that is taking place.  I say good luck Andy, good luck my friend,  you truly are a man reborn.