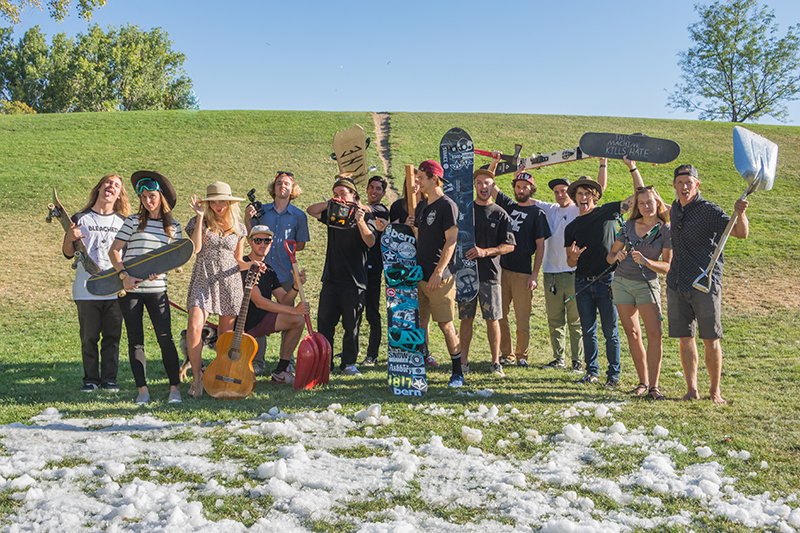 Arriving just in time to kick off the 2016–2017 ski and snowboarding season, Nov. 5 marks the day that Salt Lake City will host its first annual Shred Fest at Liberty Park. Shred Fest has brought together the action sports community, college kids, families and those who simply like to have a good time in Missoula, Montana, since 2010. Salt Lake is now lucky enough to host Shred Fest—the only festival in the country that celebrates winter sports on a local and chill level.

“Shred Fest is a ‘pray for snow’ party,” says founder and head honcho, James Fleege, with a joking smile. It’s true that Shred Fest may be the perfect place for the collective conscious to pray for a spectacular winter, but in reality, it’s just a really cool festival. Taking place in the center of Liberty Park at the bottom of the north-facing hill (where the drum circle meets), the festival will host a variety of events, including a competitive rail/quarter pipe session, a sponsor village with big brands and local shops, a lumberjack contest, an electric forest to wander through and, of course, good food, music and beer. Any successful event takes a lot of planning and organizing to make it work, and Shred Fest is no different. What sets this festival apart from others is its homage to winter sports—both skiing and snowboarding—as well as its passion for providing the local community with an opportunity to celebrate the season and get involved.

Shred Fest began when Fleege, a budding entrepreneur in his senior year at the University of Montana, wanted to create something that stood out on his résumé in the hopes of landing an official job with Burton Snowboards. As a semi-professional snowboarder, Fleege was already a brand ambassador for Burton, had made some video pieces and had been sponsored by local shops, so it made sense for him to do something involving skiing and snowboarding. The idea for a festival hit him in the early fall of 2010, when Fleege decided that the small community of Missoula could benefit from an event that welcomed winter sports and brought people together.

Starting a festival is a giant undertaking, but Fleege, being the “grab the bull by the horns” type of guy that he is, saw the task as another item to cross off his bucket list. At first, Missoula was apprehensive about supporting Shred Fest—there was nothing to compare it to. However, when the city was trying to fundraise for a new pavilion that same year, Fleege saw a win-win opportunity and offered part of the proceeds from Shred Fest to assist in building the new pavilion. The city took the bait, and by October of 2010, Shred Fest launched in the college town of Missoula. Call it luck or entrepreneurial prowess, but Year One of Shred Fest earned the city $1,200—Missoula would now always be on Fleege’s side.

Though the festival started small, year after year Fleege and his team gained traction within the community, and now, it would be impossible to discontinue the event. Headlining artists like Edward Sharpe and the Magnetic Zeros and Mumford & Sons would be among the lineups to help make Shred Fest a hallmark Montana event.

After six years of continued success in Missoula, Fleege wanted to explore the possibility of taking the festival to other cities. “It just made sense to come to Salt Lake,” says Fleege. “There is obviously a huge winter sports following here, and the city already supports summer festivals that unify the community. We really believe that Shred Fest can also be a positive addition for the locals.” Salt Lake City agrees. Even though Fleege knows his way around pitching the event, the Salt Lake City Arts Council was more than helpful in providing the roadmap for Shred Fest in SLC. “From the beginning, the city supported the idea and gave me every tool possible to help me succeed,” says Fleege.

Initially, there was talk about hosting the event at Pioneer Park, but the months of cleanup from the Twilight Concert Series would make the timing nearly impossible. Fleege then aimed for the State Capitol. “I thought the Capitol building would be a great backdrop for a winter festival, but it’s illegal to have alcohol there, so that was immediately shut down,” he says. Finally, Shred Fest decided on Liberty Park. “Liberty Park is actually perfect for Shred Fest,” says Fleege. “It’s located in a central spot downtown, and there will be enough room for all of the festival’s events.” The Shred Fest team also needed enough space to bring in the astounding 25 tons of ice shavings from local ice skating rinks to build the quarter pipe and ensure that there is enough “snow” for the rail jam. “SLC has always been a legendary spot in the ski and snowboard community,” says Shred Fest Athlete Brand Ambassador Will Wesson. “It’s events like this that keep that stoke alive.”

Gear up for Nov. 5 at Liberty Park from 2 p.m.–10 p.m. for local food trucks and  music from Hot Vodka, DJ Matty Mo and Pixie and the Partygrass Boys. Tix are $10 at shredfestival.com and 24tix.com or $15 at the door. See you there!