SLUG Mag Soundwaves
Episode #399 – Scott Lippitt
00:00 / 17:04
Spotify Stitcher
RSS Feed
Share
Link
Embed
Many styles of skateboarding have begun to commingle, creating a diversity that’s never been seen. Most of the stereotypical styles have evolved outside of the barriers of their given names. With all of these styles coming together, there is no better time to find out if yours is completely righteous or completely wack than at one of the various skate contests and events happening this beautiful summer of 2012. 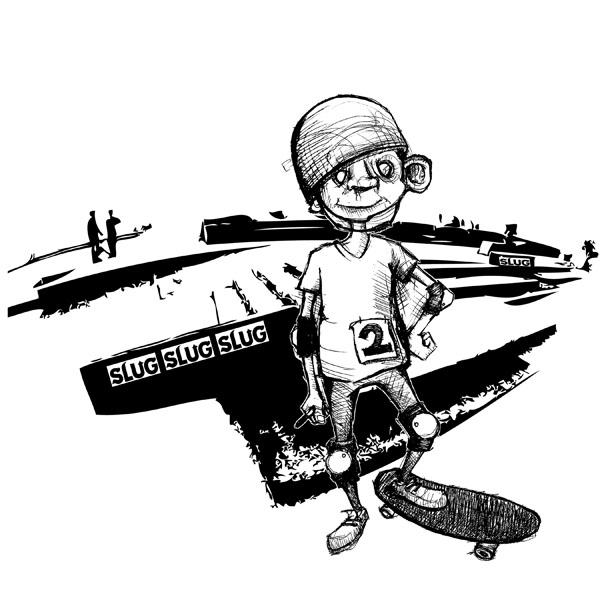 There’s no better time to find out if your style is righteous or wack than at one of this summer’s skate contests. Illustration: Jared Smith

It seems that skateboarding is in the most interesting period of its long history. Many styles of skateboarding have begun to commingle, creating a diversity that’s never been seen. Most of the stereotypical styles have evolved outside of the barriers of their given names. Hesh guys are getting way tech, and not just skating spots like sketchy pools and steep handrails. Inner city skaters have left the schoolyard benches and found hills to bomb and D.I.Y. spots to build. Jocks started skating, and in the immortal words of N.W.A, “a bitch is a bitch.”  With all of these styles coming together, there is no better time to find out if yours is completely righteous or completely wack than at one of the various skate contests and events happening this beautiful summer of 2012.

During the month of June, the wonderful people of Milo Salt Lake will be hosting a contest at the South Jordan Skate Park, which you can find on 10866 S. Redwood Road (behind the Fitness Center). This one is going down on June 16, is jam format and there will be three winners from three divisions and all around good times.

June 21 is a heavy hitter for events this year––as it should be. Go Skateboarding Day should already be written in your calendar with a drawing of a kitten playing with a skate wheel as if it was a ball of yarn on top of a fuzzy rainbow, one that somewhat resembles Nephi Beh’s unibrow when he frowns his handsome mug. It’s going to be a good day. Blindside SLC is hosting a Go Skateboarding Day event with Skullcandy, Gravis, Coalatree and Vitamin Water at the Sugarhouse store, then skating to Fairmont Skate Park (2200 S. 900 E.). There will be cash prizes, so you’d better start dusting off your best “getting wicked” boots and be ready to bust. “We’re going to bring all kinds of dogs, it’s going to be rad,” says Colby Takahashi, Blindside employee, referencing both hot dogs on a grill and “homies.”

Salty Peaks has a Go Skateboarding Day skate jam happening in the parking lot of the shop (3055 E. 3300 S.) on June 21, fully equipped with free food and drinks and some rails and ramps to skate––should be killer. On the subject of Saltys, they are putting together a skate series in which the winner of all their contests will get a trip to Camp Woodward in California. Better start getting your lines dialed for these contests. Check out their website for details and dates at saltypeaks.com, first one’s June 10 at Rose Park.

Annex is also putting together a Go Skateboarding Day event in celebration of the greatest thing ever invented: the skateboard (duh). It’ll be bitchin’ good times with the Annex dudes at their shop in Bountiful. For more details, check in with the shop in the coming weeks.

July is a great month for good times and all the sorts of debauchery that you’re into. You can buy tons of fireworks: so rad. I also hear if you get a bald eagle tattooed on your face, you get a free high five from none other than me––or a kick in the balls because I might think, from the tattoo on your face, that you’re some convicted felon trying to jump me. Summer of Death: Lords of SLUG Mag will be an awesome contest to attend, and attend it you will on July 14 at Crossroads in Ogden (95 N. Harrisville Road). SLUG contests are put on by the magazine you’re reading, so you should support them.

Ten short days into the future, you can skate in memory of a bunch of dorks with wagons on July 24 at Guthrie Skate Park on 2300 E. Bengal Blvd. in Cottonwood Heights. The Guthrie contest will be hosted by Milo Salt Lake and follows the same jam format as the South Jordan contest on June 16, and it should be a blast.

August is yours to do whatever you do to be you. Use your time wisely, for this could be the last summer for the inhabitants of Planet Earth––2012 could be a bitch if everything ends like the crazies have been preaching.

September 8 is the Summer of Death: Rough Side of the Trax street contest held by SLUG Mag and Roughneck Hardware. If you plan on skipping out on any of the contests this summer, don’t blow it by missing this one. Rough Side is a huge crew of skaters pushing from spot to spot and skating everything that’s in between, because … why not? There are three secret street spots that get awarded a best trick, and an overall winner of the day. There will be tons of cool prizes, it’s a blast and the dudes from Roughneck are the shit.

You should also check in with the Milo Orem store, because word on the street is that they are going to have some events in the mix for this summer. Stay informed.

Should be a good summer for skate events in the valley of Salt Lake. Have fun and be free to be you.