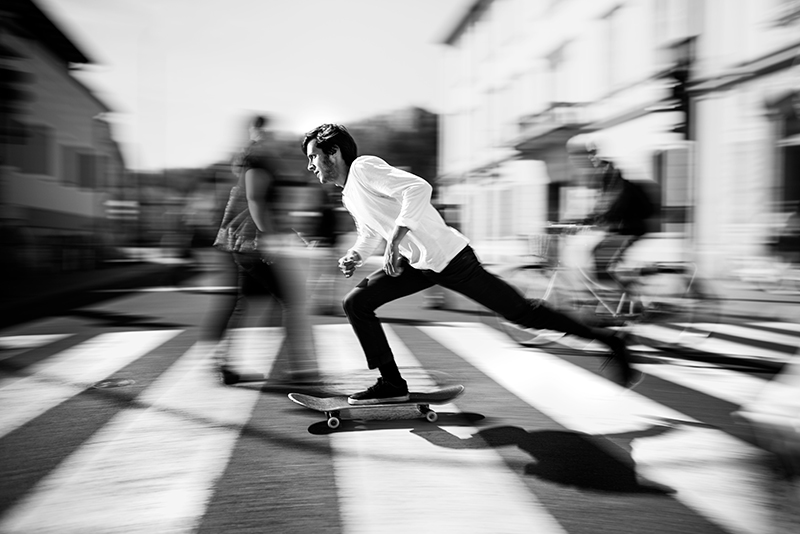 Signature starts with the familiar sound of a skater’s wheels rolling over cracks and features a skater named Luka Bizjak. The noise is always a good way to grab the attention of a viewer, which I really enjoyed. Within the first 10–15 seconds of this black-and-white skateboarding short, it seemed like all I was going to get out of it was five minutes a guy rolling around a city, weaving in and out of people—not much for a skater to get excited about. But as the guy kept skating, I realized that I was suddenly sucked into the world of this skater as he began tearing up the streets. The film shows Bizjak skating around the city of Ljublijana, Slovenia. And don’t assume that this guy is rolling around popping a few ollies and maybe a few kickflips—he shows that he has some really consistent lines, difficult manuals and can throw down some big tricks down stairs.

The main thing that stuck out to me the most that kept me interested was how the skating did not stop. It’s like it was one super-long line that Bizjak had carefully planned throughout the entire city. By far, my favorite line is when he half cabs over a little pole sticking out of the street and then throws an impossible over another directly after. We even get a second angle of the impossible in slow motion, and it really shows us the amount of pop it takes to get that trick over the pole. During one shot, the filmer is riding along, and we see a ledge with skate stoppers on it, which always brings up emotions to someone who has encountered these firsthand, whether they skate or not. I think what Stramic was going for in this shot is to show that even when people try to stop skaters from doing what they love, they will always find a way around it to continue on. That’s the beauty of skateboarding—having the feeling of freedom even when others are attempting to hold us back. Clearly, these silly little things don’t get in the way of Bizjak. It is quite interesting how most of the close-ups and slow-mo parts that Stramic uses gives us the feeling of being there or even making us feel like it is actually you out there skating.

We also get occasional shots of the city and people walking around it, which I feel like is just as important as the skating itself. When one skates around any given city, two specific things always emerge: People and structures—the two main things that make up a city. Having to maneuver around both of those obstacles will always be part of a skater’s life. In a written description of his film, Stramic speaks of this firsthand: “Nothing is intact or permanent, everything is affected and connected- the history, the city and the rider. Just as the city left a mark on the rider, he leaves a mark on the city even if just for a split second.” He continues to talk about the feel and sounds that a skater gets on a daily basis—echoes of wheels and the feeling of air, riding against the wind. He then ends it with a quote that any skater would agree could be best way of describing why we skate. “Like a signature, a rider leaves his mark – on the streets and in people’s memories—A signature of freedom.” Freedom is what we get out of skating, and we wouldn’t trade that feeling for anything. Even if you don’t skate, I challenge you to watch this short film and see what feeling it brings to you.