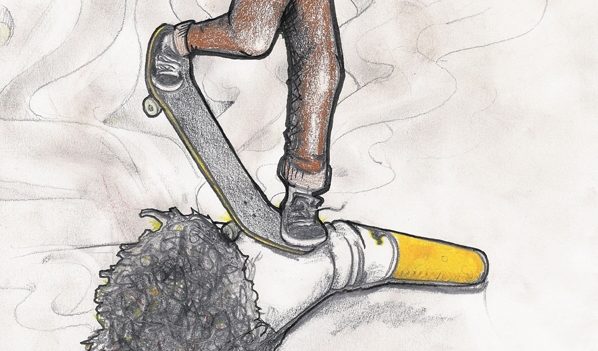 This month I’m going to touch on the subject of keeping the park clean. I mean, what’s worse than hitting a fart rock at ten miles per hour? Well, it could be stepping in some douchebag’s chewed up gum in your brand new kicks. Nothing’s worse than pulling up to the park only to find it littered with trash and having the bowls full of wet leaves and debris. I know that you don’t own the park or anything, but if you skate there on a daily basis it’s your unspoken job to clean that bitch up. They sure as hell don’t pay those parks and recreation fools enough to do it, and with the current state of the economy I’m not too sure that job even exists anymore.

If you got love for skating and your local park then stop littering the place up. And yes, cigarette butts count as littering too. It’s not like there aren’t plenty of garbage cans around, and they aren’t for tipping on their sides and doing tricks over them. If you’re going to ollie the thing, be a man about it and crack one over that shit standing straight up.

The other day when I was down at 9th and 9th I was pleased to see a push broom laying on the ground. The broom had “for cleaning up park don’t steal” written on it. Big ups to whoever left that thing there. I also see all the vert guys at Fairmont bringing their own cleaning apparatuses, but that’s pretty much a given. Who else comes to the park during the dead of winter and blowtorches out the bowl?

The point of the matter is try picking up a couple pieces of trash, fart rocks or cedar chips (lamest thing to ever to fill up space at parks) before you start skating. You never know—you could be saving your front teeth by doing so. Don’t give any of these government fucktards any reasons to bitch. If these dongs see the park is being maintained by the skaters, we’ll probably get about twenty more when this recession shit is over. Oh yeah, I keep forgetting to let you know, it’s OK to fuck off. Kill yourself, or better yet, kill a mark-ass roller blade loser.