In April of 2012, I decided to give skateboarding another go. I had made a conscious decision to abandon the sport in the late ’90s in favor of pursuing music after skating almost non-stop, beginning in the late ’80s. Skateboarding never really left my heart, though, and I felt the time had come to get out and have fun on a skateboard again. Simply picking up the latest Thrasher, Low Card or Juice magazine and pushing around on a cruiser board as I have done for the past few years just wasn’t cutting it anymore.

Skateboarding After 35: Do It For Fun or Don’t Do It at All 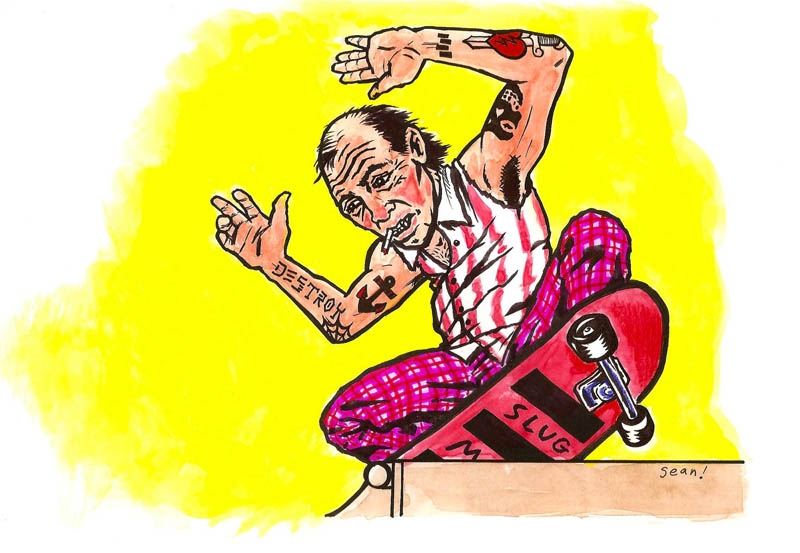 Getting older doesn’t mean you have to give up skateboarding—it just might be harder to land kickflips. Illustration: Sean Hennefer

In April of 2012, I decided to give skateboarding another go. I had made a conscious decision to abandon the sport in the late ’90s in favor of pursuing music after skating almost non-stop, beginning in the late ’80s. Skateboarding never really left my heart, though, and I felt the time had come to get out and have fun on a skateboard again. Simply picking up the latest Thrasher, Low Card or Juice magazine and pushing around on a cruiser board as I have done for the past few years just wasn’t cutting it anymore.

I was in heaven from April through mid-May—skateboarding three or four times a week, and, although I was absolutely no good at it, I was having fun. Then my world crashed and burned. In late May of this year, I was informed that I had an injury that would require surgery, and while recovering from said surgery, I herniated three discs in my lower back. Even before I was injured, I was having small but nagging feelings about not being “good enough” at skating. I had questions and doubts that literally kept me awake at night.

Toward the end of the summer, I became re-acquainted with Steve Fisher, Dave Tyler and Matt Jones, old friends of mine whom I had mostly lost touch with over the years. These guys supported my endeavors and helped me realize what skateboarding was, and what it should have always been about: fun.

Matty had been away from skateboarding as long as I had, if not longer, and when I found out he had taken it back up, it was all the motivation I needed to give it one more go (provided my body would cooperate). Steve and Dave, even though neither had ever fully given up skating, provided inspiration and support, much as they had earlier in my life. Steve has a mini-ramp in his backyard, and, as I found out just a bit too late, was having “old man skate nights” at his place on Wednesdays where older folks of varying skill levels would show up, hang out, skate and have an all-around good time. “It’s been a good year for ‘old man sesh,’ for sure,” says Dave. Even coming off of four knee surgeries, Dave is just as die-hard as I remembered him, skating as often as possible, and skating everything from curbs to ramps. I only made it to one session at Steve’s ramp this year, but I was able to attend a few “Church of Skatan” Sunday skate sessions at Rose Park with those guys, and I made up for missing Wednesdays at Steve’s by attempting to host my own “old man skate night” at Liberty Park, which simply consisted of anywhere from two to eight of us old farts doing nothing but cruising laps around the outside of the park. Travis Nelson and I have been intermittently doing this for the last three years, and I decided to try to expand the activity and invite anyone who wanted to show up and roll.

Steve, Dave and Matty are all roughly my age, and all three are married with children. Still, all three find the time and have the desire to skate as much as they can. “I’m not able to do a bunch of the tricks I used to be able to do,” says Steve, “but I’ve kind of become comfortable with ‘novelty tricks.’ They’re just plain fun.” Echoing Steve’s sentiment, I sometimes have problems pulling off even the most rudimentary tricks, and I had given up skating before concrete parks began popping up all over the valley, so I’d never had the opportunity to skate concrete transition or the desire to skate ramps, and thus I was thrust into skating terrain that was entirely unfamiliar to me.

Skating has changed quite a bit since I was a youngster. Skaters now tend to go as big and fast as possible, favoring style over technicality, and Steve’s so-called “novelty tricks”—like no-complies and bonelesses, as well as their many variations—have made a big comeback from their 1980s heyday.  Pro skaters who influenced me, such as Jason Lee, Mike Vallely, Mark Gonzales and Rodney Mullen, are still around in some way or another, but there is now an entire generation of new kids, like Nyjah Huston and David Gonzalez, who do absolutely unbelievable things with a skateboard. Although I’m just an old dude who can’t land a kickflip, these guys still inspire me to get out on my board. Bombing the parks and simply doing kickturns in the bowls or manuals over the boxes is the extent of my ability, and even though the younger kids vibe me and most likely snicker at me when my back is turned, I’m perfectly happy doing what I do. After all, I skate for myself, not to impress others.

I hope to be able to attend and host more “old man skate nights” when good weather returns, and, provided my body uses the winter to heal itself properly, I’ll be able to not only skate more, but expand on my abilities and, in essence, continue to relive my youthful skateboarding days.  Steve, Matty and Dave are all hugely inspirational to me, and all three of them helped me answer the questions that had been with me all summer and into the fall, and I remind myself of their advice every time I step on my skateboard: Do it for fun, or don’t do it at all.