00:00 / 16:39
Spotify Stitcher
RSS Feed
Share
Link
Embed
If there is a crazy bum in my general area, they’ll usually head straight for me and spark up a conversation. It doesn’t matter if I have a skateboard or not—bums love to talk to me—but the attraction is especially strong with a skateboard. At first, I thought it was something about my personality. I just naturally emitted some scent or aura that drew crazy people to me. Eventually, though, I realized it’s something to do with being a skateboarder.

Skateboards: A Magnet for Crazy 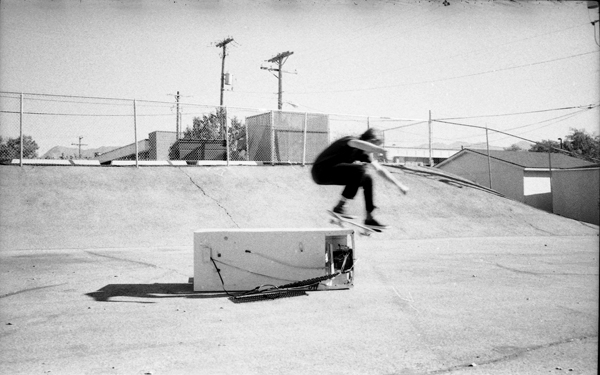 If there is a crazy bum in my general area, they’ll usually head straight for me and spark up a conversation. It doesn’t matter if I have a skateboard or not—bums love to talk to me—but the attraction is especially strong with a skateboard. As a photographer, this could turn out great, as I have had many bums ask me to take a photo of them.

At first, I thought it was something about my personality. I just naturally emitted some scent or aura that drew crazy people to me. It offered me the advantage, photo-wise. The ultimate photography cliché—portraits of the homeless—falls into my lap quite often and I don’t have to ask permission or try to be sneaky. However, I usually refuse unless they insist (as seen on this page) because that shit is boring and we all know it. Eventually, though, I realized it’s something to do with being a skateboarder. I’ve noticed that some of my friends have a stronger crazy magnet than I do.

I like skating with my friend, Jovi Bathemess, not only because he’s genuinely awesome, but he gives me a break from all the time I spend talking to random strangers (usually bums). On a recent weekend at Liberty Park, an obviously drunk man was sitting in his wheelchair while we skated. A lot of people walked by this guy without paying any attention to him whatsoever. But when Jovi skated past, it was like he was suddenly awakened by the magnetic draw of a skateboarder in his immediate bubble. He asked Jovi if he could push him over to 7-11 so he could go to church. When Jovi asked him if he was really going to church, he replied “Nah man, I just want a beer.”

Just to clarify, not all homeless people are drawn to skateboarders. There are plenty of individuals and families who happen to be down on their luck and without a home, and these people have nothing to do with your average skateboarder. But if they’re bat-shit crazy and lacking in proper shelter, you can bet that they will be drawn to talk to any skateboarder.

Some of it makes sense, as skateboarders generally tend to spend a lot of time downtown in major metropolitan areas, just like bums. It’s possible bums feel a kinship because skateboarders might be the only normal adults they see who aren’t business types. Maybe it’s the idea of having some genuine human interaction without having to hit someone up for change or beer money.

Another commonality skateboarders share with bums is that no one wants us around. On my first trip to New York City, I noticed how insane the skate stoppers were on the benches in Midtown Manhattan. The skate stoppers had these crazy spikes on them. It was only after closer inspection that I realized they weren’t skate stoppers, they were “bum stoppers.” The spikes were put in place to keep bums from sleeping on the benches. They served a dual purpose, unintentionally, of keeping bums and skateboarders from using prime architecture and so-called public space.

Bums are also willing to explore parts of the city where your average suit won’t go. The alleys that smell like piss and are full of waste from nice restaurants are popular bum haunts. Oddly enough, skateboarders tend to explore these same areas. The constant search for new spots often leads a skateboarder to the home of a bum. This is one of the exceptions where bums tend to get unfriendly with skateboarders. I have seen many sessions ruin a bum’s day by making too much noise during the mandatory daytime drunk-napping. I have also seen it go the other direction, even to the point of having that bum defecate at the bottom of a bank because he was so angry at the noise.

I am also consistently amazed at how many bums used to skate and how many insist they were once pro. Cops often insist the same thing, but skateboarders’ relationship with cops is a little more complex and jilted, and is a whole other story. No demographic seems to have more former skateboarders than bums.

Moments before the run-in with Jovi and the guy needing a beer, I went to get a drink from the fountain, and another bum I see quite often asked to try a shove-it on my skateboard while telling me over and over again “I used to skate.” Two run-ins don’t usually happen back to back, but the stars must have been aligned that day to make the magnet especially strong.

The epiphany I came to from analyzing this whole situation with my “intense sociological training” is that skateboarders and bums both lack the capacity to be average people. Individualism and expression run rampant among skateboarders and bums. To a responsible adult with a lot of material possessions to lose, this comes across as a sign of mental illness. Maybe it’s anger due to the subconscious desire to live life with the kind of unbridled freedom that comes from not giving a fuck, whether it’s pushing a skateboard down the street at 3 a.m. or pushing a shopping cart in the same fashion.

Charles Bukowski may have said it best: “Some people never go crazy, what truly horrible lives they must lead.” I’ll take my bum friends over your upper-class friends any day. See you downtown.