00:00 / 15:25
Spotify Stitcher
RSS Feed
Share
Link
Embed
On July 16, SLUG Magazine’s Summer of Death skateboard contest series celebrated its twelfth anniversary with the Pajama Jam, presented by Quiksilver and Natty Light.  This year, the tradition continued at the Skate 4 Homies warehouse and we couldn’t have been more excited with the park that Todd Ingersoll and friends built. 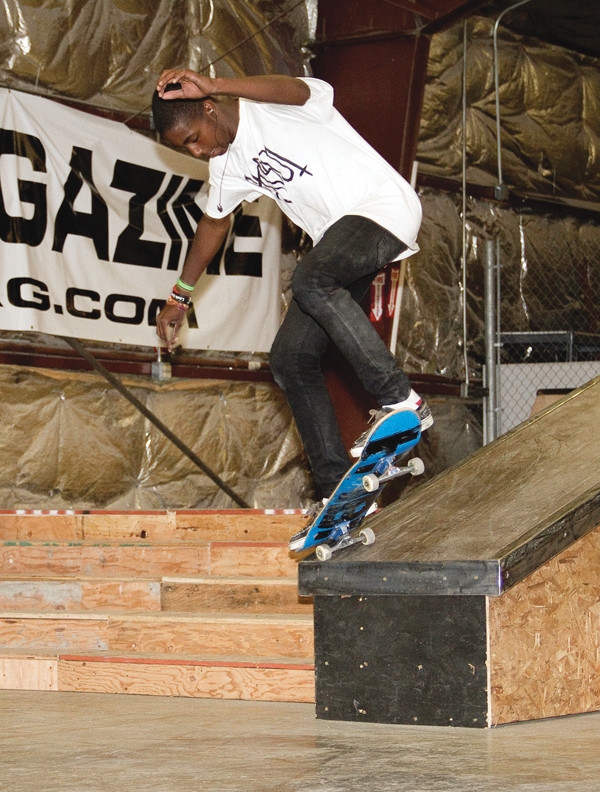 Terrell Moss sticks a sick back blunt down the hubba. Photo: Katie Panzer

On July 16, SLUG Magazine’s Summer of Death skateboard contest series celebrated its twelfth anniversary with the Pajama Jam, presented by Quiksilver and Natty Light.  This year, the tradition continued at the Skate 4 Homies warehouse and we couldn’t have been more excited with the park that Todd Ingersoll and friends built.  The main feature, which saw the majority of the action, was a mini-ramp drop into a stair set with a hubba and a handrail. It could also be hit from the opposite direction with enough speed.  The rest of the course featured various rails, boxes and ledges with a four-foot quarter pipe on the far end.  Up for grabs this year were skate decks and swag for all the podium skaters, and cash prizes for first place Am, second place Open and first place Open.

As the time grew ever closer to 3 p.m., skaters gathered around the registration table manned by the beautiful ladies of SLUG’s marketing team to get in on the action. Quiksilver was holding it down at their booth slangin’ more than 10 skate decks via a game of Spin-the-Bottle SKATE, and generally keeping people happy with tons of other free swag.

The crowd this year may have been our most diverse to date with tons of fresh faces, young and old, showing up to skate or show their support.  Our all-star cast of judges, Jared Smith, Dirk Hogan and Panda Pauley, had prime seating on the balcony overlooking the entire course. As the spectators shuffled into the warehouse and the music blared, it seemed the stage was set for an epic afternoon, so our MCs Eric Hess and Billy Ditzig grabbed their mics and kicked things off.

The kiddies were the first to take to the course and as usual, each tre-flip, backside flip off a ledge or feeble down a handrail landed by a 12-year-old brought me back to the realization that I will never ever be as good a skateboarder as these kids.  For the Am division, Colton Anderson took third while brother Caden Anderson snagged himself the second place spot, but it was Jorge Martinez who took enough risk and landed enough bolts to take first place and mountains of fame and glory.

The Open division saw a stack of new faces mixed in with some familiar ones, and neither disappointed.  Caleb Flowers, no stranger to Summer of Death contests, showed up with some seriously stylish skating and got a lot of cheers out of the crowd.  Ozzy Henning, emerging as one of the smoothest and most versatile skaters around, landed a slew of technical tricks down the stair set, and he made it look easy.  Best Trick was a tough pick because there were so many bangers being thrown down the stair set, but it was Jordan Brown who sacked up and landed a tre-flip 50-50 down the hubba with textbook precision to take home the trophy.  Ozzy Henning received the Honorable Mention for his remarkable performance.  Taylor Mineer snagged third place overall. Noe Rodriguez came out of nowhere and killed it in the final round to take second place, and it was none other than Logan Summers who skated just a little bit better than everyone else to take first place, which awarded him a complete set-up, cash prize and tons of other prizes from our sponsors.  Last but not least, Israel West, another Summer of Death regular, deserves a special shout out for winning the pillow fight and proving that he has no fear when faced with swinging goose feathers.

As always, we could never do this without the help of our sponsors:  Quiksilver, Natty Light, Skate 4 Homies, Saga outerwear, Milosport, Salty Peaks, Annex, Blindside and Technique.