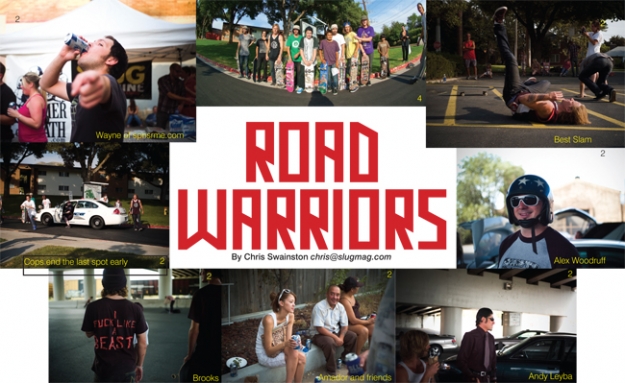 I pulled under 600 North, astonished by the number of people that had gathered for the fourth year of SLUG’s street-style skate contest. It was half an hour before Summer of Death: Road Warriors started and more the 50 people were already on the scene shredding and sipping some undercover, frosty, adult beverages. The first spot was a quintessential Jersey barrier with concrete transition that SLUG Mag had built along with Dick Weed and Chuck Langlois. This was no fluffy spot. There is nothing easy about jamming straight into a concrete wall.

The contest kicked off and everyone started powering at the barrier in one big jam session. As most were still trying to figure out what the hell they were going to do on the thing, Sean Hadley powed past everyone and layed down massive frontside 5-0 variations. Israel West got vertical with a miller flip, while Isaiah Beh backed his bible brother up with a blunt fakie. Andy Leyba, (2nd place winner from the Kickflip the Economy contest) rolled up to the scene dressed to impress with a black tie and slicked back hair but that’s about all he had to offer for this spot. Kordel Black ripped in with a feeble fakie and Brandon Hobush layed down a lengthy boardslide rock. This was not going to be an unambiguous decision for the expert judging panel consisting of Tully Flynn, Jason Gianchetta, Keaton McDonald and guest pro James Atkin. As the session roared on, nearby train yard workers started taking heavy notice to all the skaters filling up the spot. Fearful of our sheer numbers, they kept it on the sidelines and radioed for back up. Dave Amador caught word of the fuzz coming in for some crowd control so the call was made and the session ended. Everyone piled into their cars and scattered to the next spot with haste.

The best part about this contest is the unrestrained street-skating essence that it embraces. These are real street spots, there is no special permission to skate—it is rough, rugged and raw. If the cops come, you better run.

The next spot was very well concealed. Nestled among tall buildings, it is primarily a flat ledge. However, to those with a keen skate eye, there is much more to offer then that. Hobush got tech with a smith kick-flip and smith bigspin, Chase Strikwerda cracked an ollie over the hand rail leading up to the loading dock and Mark Judd kickflipped his way up the step. Hadley, frustrated with everyone’s slow feeble trick attempts on the ledge, took a different route, cutting against the grain with a kickflip wallride off the steep up bump. Leyba killed the comedy act momentarily for a 50-50 finger flip and West shut the spot down 50-50ing the handrail coming off the loading dock. This was the gnarliest trick of the day. There is virtually no runway to get any speed and you have to cut into it from almost a 90-degree angle. Pandemonium unleashed once he rolled away. Nothing else needed to be seen and nothing else could be done. This session was over. It was off to the third and final spot:­ the Sunny Side handrail.

This rail is wide open to the streets, nothing around to keep you hidden, which meant no time to pussy foot around with tester slides and ollies. As soon as everyone arrived at the spot, it was go time. Beh wasted no time, putting down a krooked grind first try and later backing it up with a front board smith grind and front tail. Hadley touched down with a front-side nose-slide and bigspin down the stair set while Hobush blew through a frontside hurricane. Following right behind him with a skillful front feeble was a random kid I’ve never seen before. The session was heating up quick and then two patrol cars rolled in bringing it to an abrupt end. The boys in blue stood confused, not having any idea what they were going to do with all these skaters overrunning the place. We, however, weren’t about to sit around and wait for them to make the first move. A couple kids gave the rail one more go and everyone quickly fled the scene down to the afterparty at Helen and brother Ian Wade’s new shop Fresh on 900 South and 870 East.

Ian Wade already had the grill fired up to feed the wolf pack and Natty Light kicked it off right with a tub full of beers for those that could legally indulge. Yudu kept it creative, screen-printing custom shirts and sheets of grip tape for the crowd. Randy Riddle got everyone connected at the Evolution Wireless booth and the Board Bunnies evened out the babe to bro ratio. F1ND and Odeus held down the local board company scene. Moriah Roberts hyped everyone up for the Dew Tour while SLUG Mag gave the A.D.D. skate rats a chance to win some free product from Celtek, Skull Candy and Milo Sport with a carnival-style prize wheel tagged with skate tricks. One spin, one trick, one try. Sevenfold kicked in $77 in cash for first place while C1RCA gave out some goods in the product toss along with our other sponsors Salty Peaks, XMission, Blindside, Bacon Skateboards, Lenitech, XSI Insurance, Borosyndicate, spnsrme.com and FUEL TV. Tully Flynn over at the Deadly Metal Shop presented some ferocious hand made weaponry for trophies. Third place received a butcher’s knife, second a razor sharp machete and first received a terrifying battle-axe. My personal favorite of the set was the war hammer for best trick. Once again, we conquered the streets and despite the cops’ petty efforts at shutting down the scene, it was one hell of a contest. Some serious skating unfolded and some unknown rippers unveiled themselves. Until next year, keep running them streets.