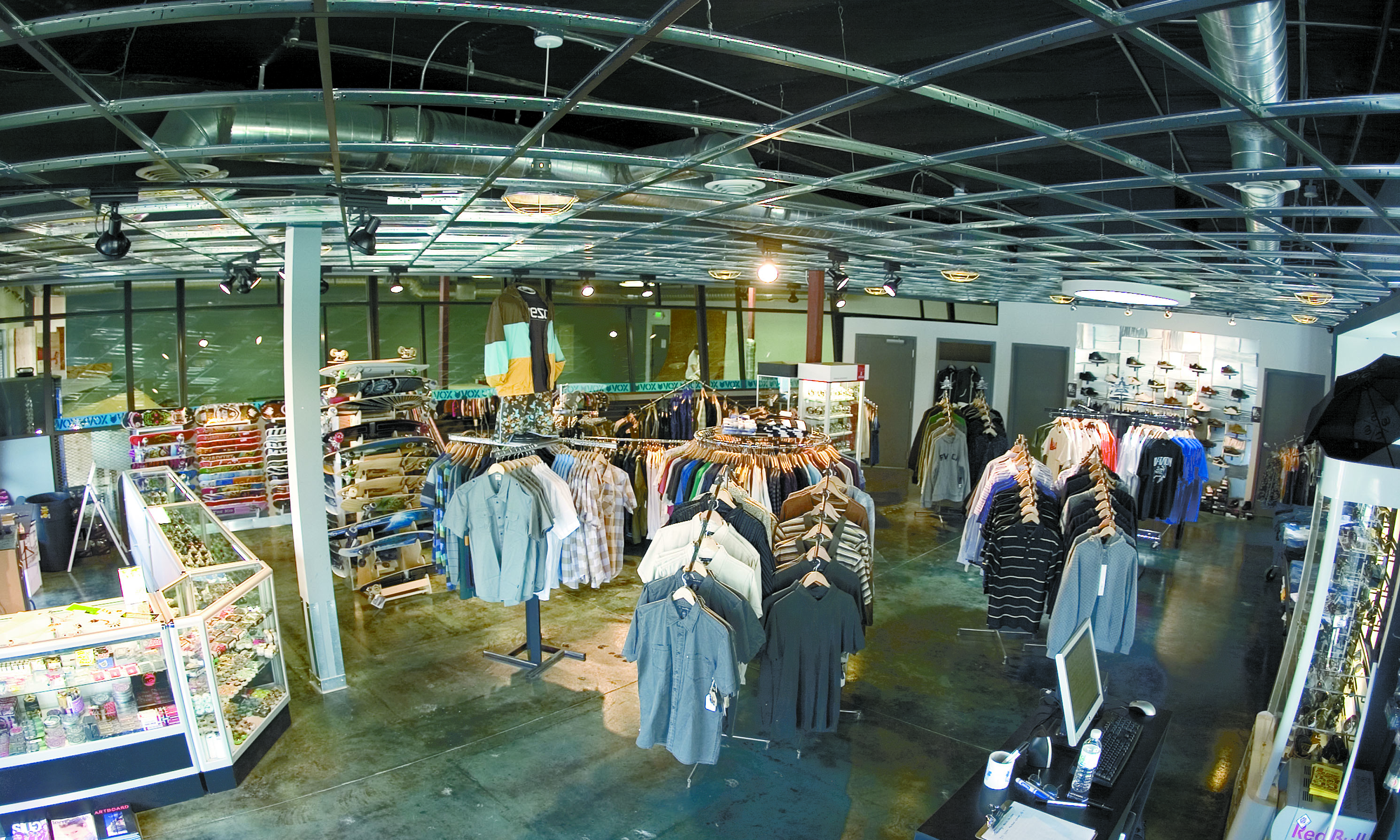 Sandy City finally has a skate shop they can be proud of. On top of that, the skaters of Sandy now have a place to skate during the winter months or when it’s rainy outside. Don’t get me wrong, I don’t have thing against mall shops (they suck), I just hate all the other people who hangout inside the mall. The average American (U.S.A.) consumer makes me sick. I have a hard enough time just going to the grocery store to buy beer. Union Skate shop /Snow Shop is located is located on 9400 south and 909 east in Sandy City. The store actually used to be located in Highland, Utah. Where the hell is that? I think that is probably the reason they re-located the shop. As far as skate shops go, Union has it going on with room to grow and believe me, they will grow. The store has a friendly staff to help you with your needs and all those stupid questions kids love ask and they have one of the best skate product lines in the Valley (these guys carry more pro-model trucks than most shops have pro-model boards).

But what do skaters really want? Of coarse they want a place to skate. Union is the only shop in the Valley with its very own skate park. The park consists of a small street course set-up and a fun-ass mini-ramp. Sure it might not be Woodward, but it is a new place to skate when you get over skating Sandy Park (Twin-Peaks). Plus, there are no gangs of BMXers and fruit-booters in your way. The mini-ramp has had some pretty heavy sessions so far and the shop may be having an invite only contest on this ramp in the near future. Don’t get bummed if you’re not on the list. For all the kids that want to skate the park, be sure to remember to bring one of your parents to sign a waiver. After that, you are good to go.

Union will be having its first contest ever Saturday, June 16 in conjunction with SLUG’s Summer of Death skate series. It will be held outside of the store in the rear parking lot. The shop doors and indoor park will be open all day. Sessions will be free on this day only. They will be having a barbeque as well. Oh yeah, did I mention that there is a thousand dollars of prize money up for grabs? That’s $750 for first and $250 for second. This is just unheard of in Utah.

Travis Beauchesne is the man behind the shop. You will not find him in the shop working because he has way more important things to be attending to. He is however, the Daddy Warbucks of this whole thing, so I had a few questions to ask him via e-mail. Here is what he had to say.

SLUG: How long was Union at the Highland location?

Travis: We were there for about three years.

SLUG: Why did you relocate the shop? Travis: Becaue “This is the Place”. It’s close to the hill, and Honks Buck O’ Five. I love this area.

SLUG: What is your affiliation with skating and snowboarding? Did or do still skate or snowboard?

Travis: I made it the decision to make it part of my life a few years back. Between The Levitation Project, Union, and Costa Rica, I just want to cruise and support people that have been there for me. I try to skate here and there. Winters are the shit in Utah. I try and ride as much as possible.

SLUG: What is your job title outside of the Union thing?

Travis: I am a full time dad. I own a few things, none as cool as Union.

SLUG: How have things been going at the shop so far? What are the long -term goals of the shop?

Travis: I used to set goals, it made me crazy. I am not trying to change the world here, just support my friends and not get vibed by pirates. ARRRRG!!!

SLUG: What sets Union apart from all the other shops in the valley?

Travis: I can’t speak for the rest of the shops around here, and there are some good ones. I don’t ever want to get stink eye from ginger behind a counter because some guy in a suit wants to buy his boy a deck. True story. I am not that cool. I would like to think that we have fun at what we do, we don’t take ourselves to seriously and sleep at night. We have an indoor park with clean bathrooms and strippers. Okay, no strippers.