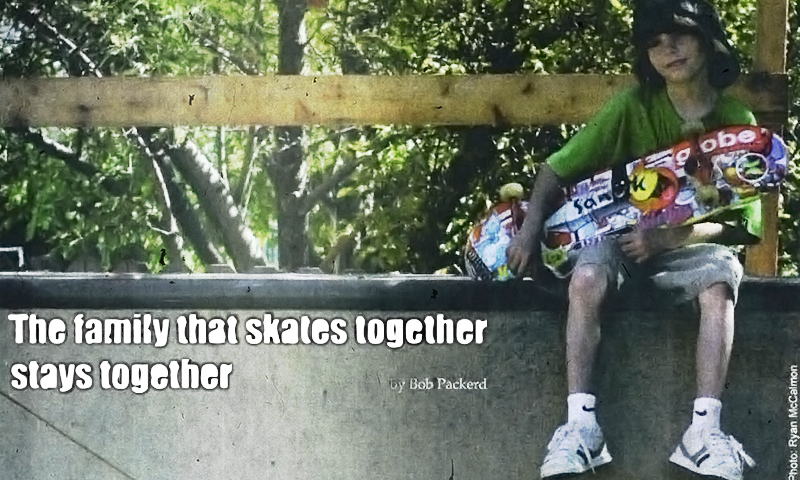 The Family that Skates Together Stays Together

I fell asleep to Schoolhouse Rocks the other night; Maybe Kim Bowerbank should get her son a copy so he can sit in front of the TV instead of annoying the neighbors with his damn skateboard.

[Tyson]For those familiar with the Hanger 18/Marine Products ramp, it is now in the Bowerbank’s backyard (e-mail me for the address and we’ll go skate it! It’s only a Class C misdemeanor). The ramp was taken apart and reconstructed according to the specifications given to the Bowerbanks by the City of Sandy. Prior to the ramp construction, the Bowerbanks received the wrong information on city code. This played a substantial role in the proceedings that followed.

Problem is, one of the neighbors didn’t like the idea of the ramp in his Sandy neighborhood. They claimed that the ramp “sounded like a bus going by,” and was an invasion of their privacy. Furthermore, these neighbors claimed they “couldn’t sell their house because of it” and that the ramp, at 6′ tall, 24′ wide and 39′ long with a 7′ extension, was “against code.” It is with these allegations that a rather entertaining Sandy City meeting was held last month.

The Bowerbank family had some serious guns to stand behind and the support to man said weaponry. The room was crowded and full of people from all ages and walks of life.

Kim (Tyson Bowerbank’s mother) opened the meeting with an extremely moving and emotional speech that only a loving mother could deliver. Then the floor was opened to discussion. Of course, the complaining neighbors came first, armed with an attorney and real estate agent. Numerous friends and family of the Bowerbanks and other neighbors that don’t mind the ramp in the yard followed.

Apparently, the Sandy City Council is a bad influence. They were very understanding and almost every one of them had a story from their life similar to the Bowerbank family’s.

The decision was unanimous. Tyson got to keep his ramp. However, it needed to be downsized to meet city code and needed to be approved by the Sandy planning commission. After the motion was set, chairman Pott offered Tyson the chance to speak. If you know Tyson, his skating speaks louder than he does. Shy, timid and cute as a button, Tyson had this to say:

“Chairman Pott and council members, my name is Tyson Bowerbank. I understand that my ramp is against some city ordinances. However, I need the parts that are against the rules to accomplish my goal. I am not riff-raff; I am an ALPS (Accelerated Learning Program) student at Peruvian Park Elementary. I would really like to keep my ramp; this is a training tool for me and not a toy. I would love to keep my ramp and accomplish my goal to be a pro skateboarder by the time I am 11.”

With the rapid growth of skateboarding, it is great to see the number of parents that support youth. The Bowerbank family are among that number, they would do anything to see their son fulfill his dream.

This year’s Summer of Death series had its number of hitches, but the best part was to watch parents cheer their kids on. Without parents’ support, many of these up-and-comers wouldn’t have the means to get where they are today. Shout-outs to all the parents who supported their kids and the Summer of Death!!!

With the change of seasons comes the change of terrain. Cover those backyard ramps folks (you know who you are). Head on down to Binary at 12577 S. 269 West. And if you know the secret location of the 48 training facility, you’re one happy lurker!

The Utah skate scene is so diverse. From the mini-ramp champ, the vert dogs, street cats, park locals, etc., etc., etc., we look forward to making the next year’s skate season better than ever. And from the looks of the support we got from many of the parents, it will be just that. Utah has bred some darn good skateboarders and hopefully, with parents like Mr. and Mrs. Bowerbank, it will continue to do so.